Accessibility links
What's To Love And Loathe About Chocolate Milk? : The Salt Across the country, schools are tossing flavored milk out of lunchrooms as part of an effort to address the childhood obesity epidemic. Meanwhile, endurance athletes are increasingly embracing chocolate milk as a recovery drink. And there's some science to back that trend. 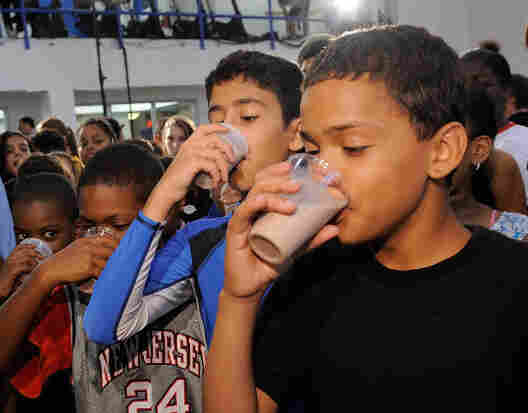 Across the country, schools have been tossing chocolate milk out of lunchrooms. But these New York City kids chugged low-fat chocolate milk as part of Refuel America. Launched in the summer of 2010, the campaign promotes the drink for post-exercise recovery. Jemal Countess/Getty Images hide caption

Chocolate milk has an interesting rap these days. Endurance athletes increasingly love it as a recovery drink.

And who's loathing it? Schools — advocates for school food reform, to be more specific. They argue it's got too much added sugar and too many calories.

So how to explain the love? Well, a few, small exercise studies have found that chocolate milk can help boost endurance after intense workouts. Research also suggests that the protein in milk speeds up the time it takes for muscles to recover.

"I think in years past, you would have been a little bit strange if you drank chocolate milk immediately after a run. But now it's absolutely mainstream," says marathon runner Dan DiFonzo of Rockville, Md.

DiFonzo says runners are looking for that one drink that will help them feel better so they can run again. "Chocolate milk's been doing it for me, so I stick with it," DiFonzo told The Salt. 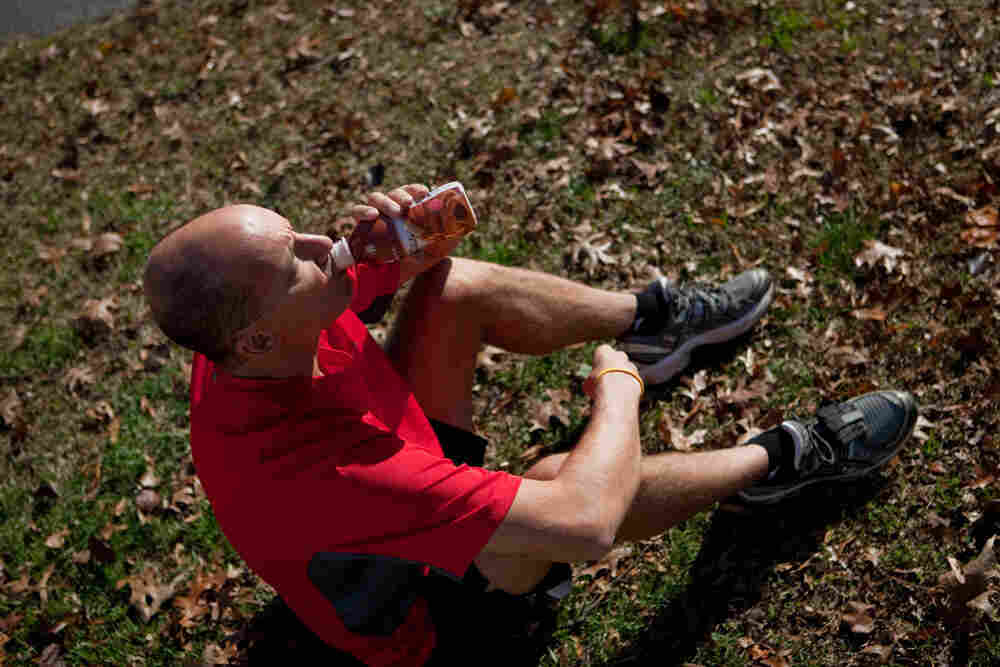 DiFonzo says that when he ran the Wineglass Marathon in Corning, N.Y., earlier this month, he had expected the tables of Gatorade and water. But as he crossed the finish line, what was he handed? A carton of chocolate milk, compliments of the American Dairy Association.

Adding to the intrigue over chocolate milk is a new line of scientific inquiry. Researchers at Penn State are studying the unusual way that cocoa interacts with a specific digestive enzyme.

"Compounds in cocoa inhibit the activity of the (pancreatic lipase) enzyme, so they block it from breaking down fat," explains researcher Josh Lambert. Basically, that helps the body fend off fat.

If it sounds too good to be true, Lambert says it's too soon to get excited over the potential of eating cocoa to manage your weight: "It's hard for me to tell if there's enough of the (polyphenolic) compounds in a glass of chocolate milk to make it that much different."

Whatever boost the good compounds in chocolate milk may provide, the bum rap it's getting in schools is due to the fact that it's usually loaded with extra sugar and calories.

"In my world, chocolate milk is soda in drag," says Ann Cooper, director of Food Services at the Boulder Valley School District in Colorado. She's also known as The Renegade Lunch Lady — and a leader in the effort to transform the way kids eat at school.

"Most of it (chocolate milk) has as much sugar as Pepsi or Coke, and it doesn't belong at schools," Cooper told me at an event sponsored by Real Food for Kids in Fairfax County, Va.

Lots of reformers are tossing chocolate milk out of the lunchroom. From Los Angeles to Minneapolis and D.C., schools have been eliminating or limiting flavored milk. Many see it as a small but concrete effort to address the childhood obesity epidemic. And even famous TV foodies are taking up the cause. Earlier this year, British foodie Jamie Oliver appeared on Jimmy Kimmel Live! to make the case against chocolate milk.

Banning chocolate milk may sound like a simple step aimed at making kids healthier. But there's a long history of drinking chocolate milk (mainly, hot cocoa) in schools. Notes dating to the early 1900s from the School Lunch Committee of the Home and School League in Philadelphia show that a serving of milk or cocoa was offered every day as part of a five-cent noon meal.

And when schools take away the option of chocolate milk, it doesn't always go smoothly. "When we eliminated chocolate milk" explains Penny McConnell of the Fairfax County Schools, "we had as many parents upset as the ones who were pleased with it." Some worried their children would stop drinking milk and wouldn't get enough calcium.

So McConnell worked with her dairy suppliers to eliminate high fructose corn syrup and reformulate the chocolate milk. The skim chocolate milk she now serves has only 30 calories more than the regular 1 percent milk.

And what's the reaction been? "I haven't heard any complaints," McConnell told me.