Accessibility links
Bush Meat: When Conservation And Child Nutrition Collide : The Salt Bush meat has been a critical part of the Malagasy diet, warding off anemia and malnutrition. The challenge: Balancing the needs of local people in cases where tasty wildlife is also critically endangered. 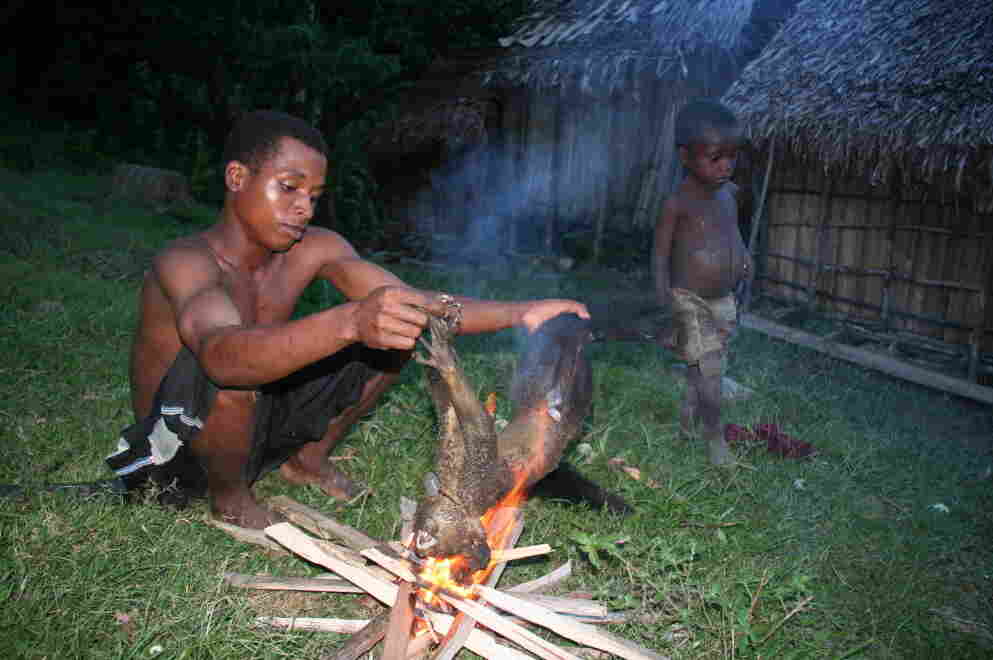 A man prepares an aye-aye, a rare type of lemur found only on the island of Madagascar, for dinner. These primates are an important source of iron and protein despite being critically endangered. Christopher Golden hide caption 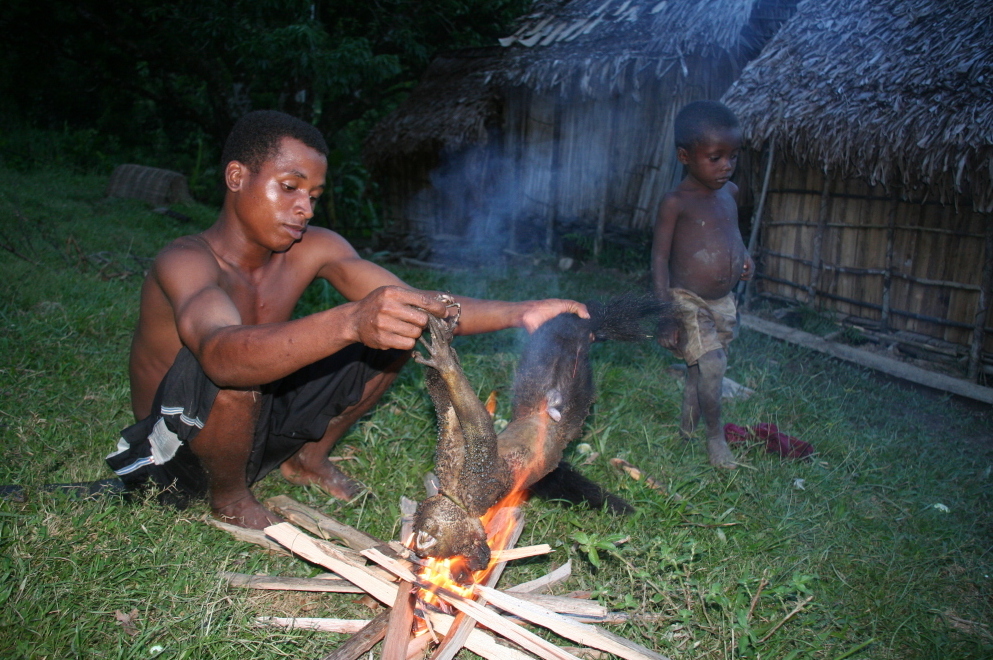 A man prepares an aye-aye, a rare type of lemur found only on the island of Madagascar, for dinner. These primates are an important source of iron and protein despite being critically endangered.

With its big, round eyes and bushy tail, the aye-aye lemur looks like a a cross between a monkey and a squirrel. To many people in Madagascar, it's a tasty, traditional meal, and an excellent source of protein and iron.

But with as few as 1,000 to 10,000 lemurs left on the island, conservationists say they're critically endangered and don't belong on the dinner table.

The hunger for rapidly declining bush meat is raising the possibility of a troubling ultimatum for people who want to help the poor and the wildlife in countries like Madagascar. The question is who to prioritize: malnourished children or wildlife at risk of extinction?

A study published online yesterday in the Proceedings of the National Academy of Sciences only adds to the dilemma. It showed that children in Madagascar who ate more wildlife were less likely to suffer from iron deficiency anemia than other kids.

Anemia can affect brain development and has been linked to a host of problems related to attention span and information processing, in addition to physical weakness. Those health and learning problems can follow children into adulthood, Christopher Golden, who did the research for the paper as a graduate student in public health at the University of California, Berkeley, tells The Salt.

Currently, 63 percent of Malagasy children under the age 12 suffer from anemia and malnutrition. Bush meat (not including fish) comprises around 20 percent of the animal products in the local diet.

After a year of monitoring the iron levels of 77 kids, the researchers looked at what would happen if the children ate no bush meat and found it could increase the risk of anemia by nearly 30 percent. In the region's poorest households, loss of bush meat as a food source might mean a tripling of the number of children with anemia, the study found.

As important as the bush meat has been for providing kids with the iron they need, conservationists say there's less and less of it around for the taking. The Makira-Masoala Landscape, one of the largest tracts of rainforest in Madagascar, has traditionally supplied local people with 23 different species of mammals to eat, including lemurs, bats and mongoose-like carnivores that aren't found anywhere else in the world. "Many of them are threatened or endangered," Golden tells The Salt.

Conservation laws that heavily restrict hunting in hopes of protecting wildlife populations exist. But those laws are not enforced and local people continue to hunt. Consequently, they risk losing their food source forever. Either way, Golden says, the communities don't have enough meat to eat and health problems are increasing as a result.

"Food security is an enormous problem in much of sub-Saharan Africa, and poses a great threat to public health, wildlife populations and ecosystem health," Natalie Bailey, coordinator for the Africa Biodiversity Collaborative Group (ABCG), told The Salt in an email. The ABCG is a coalition of seven conservation organizations, including the World Wildlife Fund and the Nature Conservancy.

Golden agrees. "The trajectories in human health and in environmental conservation are inextricably woven together," Golden says. He hopes his research will lead to more collaboration between groups with different goals, but admits, "it's very difficult to bring these two communities into conversation."

Conserving wildlife populations is a problem throughout Africa, and each country has unique struggles. As NPR's Christopher Joyce reported earlier this year, in Namibia, where wildlife is seen as having a high dollar value, conservation improved when local farmers were given more control over the animals and stood to profit from keeping their populations healthy.

In Madagascar, Golden says, money is less of an issue than nutrition. Less than 5 percent of what's hunted is sold, while the rest is eaten right away.

Luckily, while the Malagasy may prefer to eat lemur, their second favorite food is chicken, which is also high in iron. "It's an incredibly important dietary resource," Golden says — one that could be expanded upon, reducing people's need to hunt bush meat.

Chickens aren't native to the area, and local people have never been taught to care for them. As a result, it's common for 60 to 80 percent of their flock to die off from common avian diseases.

In December, a team of veterinarians from the San Francisco zoo will visit Madagascar, bringing vaccination to the chickens and training for their handlers.