Accessibility links
Eating Canned Soup Makes BPA Levels Soar : The Salt A couple of hours after eating, participants in a Harvard study who consumed canned soup had BPA levels in their urine that were about 12 times higher than the people who didn't. But the health implications of this sort of exposure to the chemical, which can act like the hormone estrogen, are still murky. 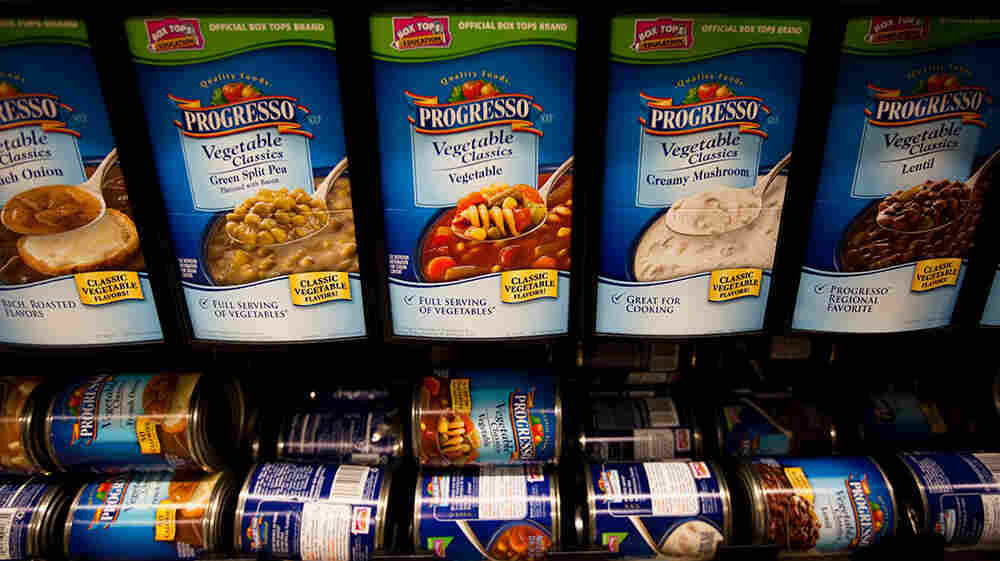 A Harvard study found dramatically higher BPA exposure in people who ate canned soup. The researchers used different varieties of Progresso-brand vegetable soups, but BPA is found in the epoxy resins used to coat the inside of many food and beverage cans. Maggie Starbard/NPR hide caption

If you read the ingredient list on a can of soup, you're likely to see items like carrots, wild rice, perhaps some noodles. What you won't see listed: the industrial chemical BPA, or bisphenol A.

But a little canned soup for lunch can dramatically increase exposure to the chemical, according to a study in the Journal of the American Medical Association.

The study confirms that canned food is a source of BPA exposure. But it does nothing to clear up the question of whether this sort of exposure to BPA has health consequences.

BPA is found in some plastic bottles and in the epoxy resins used to coat the inside of many food and beverage cans. Previous studies have shown that some BPA from can linings does get into the foods they hold.

Some scientists are concerned about BPA exposure because the chemical can act like the hormone estrogen, and studies show that high levels can affect sexual development in animals.

But people are exposed to much lower levels. And agencies including the Food and Drug Administration and Environmental Protection Agency haven't found evidence that this exposure is causing problems.

In the new study, researchers at the Harvard School of Public Health compared people who were given canned vegetable soup for lunch each day with people who got vegetable soup made without any canned ingredients.

And they found that a couple hours after eating, the people who had canned soup had BPA levels in their urine that were about 12 times higher than the people who didn't.

The levels were still within the range that government agencies consider safe.

Even so, "We were surprised by the magnitude of the elevation," says Karin Michels, senior author of the paper. Michels says previous studies have found much less dramatic increases after people drank from polycarbonate bottles.

It's unlikely that soup caused BPA levels to remain high very long, Michels says, because the body tends to excrete most BPA within a few hours. But she says levels could stay high for people who regularly consume foods and beverages from cans.

Michels says she can't comment on the health implications of the finding because that wasn't part of the study. Even so, she says, food makers might want to consider eliminating BPA from can linings.

But industry groups say it's not easy to find a safe, affordable and effective substitute for BPA in can linings. An analysis by the North American Metal Packaging Alliance (NAMPA) found that epoxy resins had significant advantages over the alternatives.

And without some sort of coating, metal cans can corrode, allowing bacteria to contaminate the food and putting consumers at risk for food poisoning.

"Consumers need to remember that BPA-based epoxy coatings are used to keep food safe," said NAMPA Chairman John Rost in a statement issued by the group.