Accessibility links
A Dissolving Fruit Sticker That Claims Soap Superpowers : The Salt A young designer has invented a sticker for fresh produce that turns into soap and removes wax, pesticides, and dirt. While food safety experts say the product could help reduce waste, it may not clean produce any better than water. 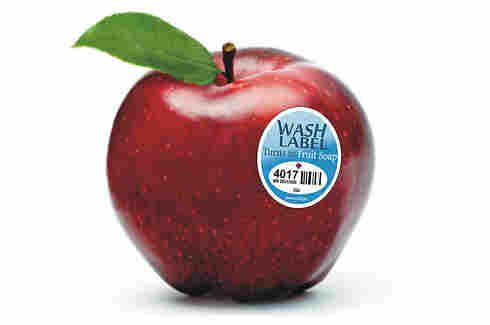 Scott Amron really doesn't like peeling those little stickers off fruit from the grocery store. "They're pesky and annoying and they create waste," he tells The Salt. So, he decided to do something about it.

"I thought [the labels] could serve some sort of secondary purpose rather than being thrown away," says Amron, a New York-based designer and engineer who's best known for inventing the Brush & Rinse toothbrush. "Originally I wanted the label to help clean the fruit, and that evolved into having it dissolve."

Today, Amron's firm is preparing to roll out Fruitwash, a sticker that turns into a soap under running water. Once dissolved, the Fruitwash allegedly removes wax, pesticides, and dirt from fruit and vegetables. And while he won't reveal what the sticker is made of, Amron says it contains all "organic" ingredients.

It's a nice idea, but food safety experts say Fruitwash, or any other fruit and vegetable wash on the market, isn't that much more effective at cleaning produce than plain old water.

In 2007, researchers at the Institute of Agricultural and Environmental Sciences at Tennessee State University tested Veggie Wash against both diluted vinegar and plain water. Sandria Godwin, the researcher who oversaw the project, told NPR at the time that, "We really did not really find the veggie washes effective or necessary."

This month The Salt checked in with Godwin, who told us that she still thinks "water works as well as anything else. It is the scrubbing that is important." But she says she likes the idea that Amron's Fruitwash sticker doesn't create extra waste.

The U.S. Centers for Disease Control and Prevention agrees that rinsing fresh food with water is the best way to keep it safe. Squeaky clean cutting boards and utensils will also help keep the risky bacteria at bay. And for more on which fruits and veggies need the most cleaning before eating, check out this post from our friends at Shots.

As for those pesky stickers, researchers at the Oregon State University Food Innovation Center are developing a laser labeling system that would make an imprint on the surface of the fruit.