Accessibility links
Is Fair Trade Coffee Still Fair If It Comes From A Big Farm? : The Salt A major certifier of fair trade foods says it wants to buy and certify coffee from big farms. But others in fair trade say that goes against the industry's priority of helping small farmers.

Listen
Is Fair Trade Coffee Still Fair If It Comes From A Big Farm? 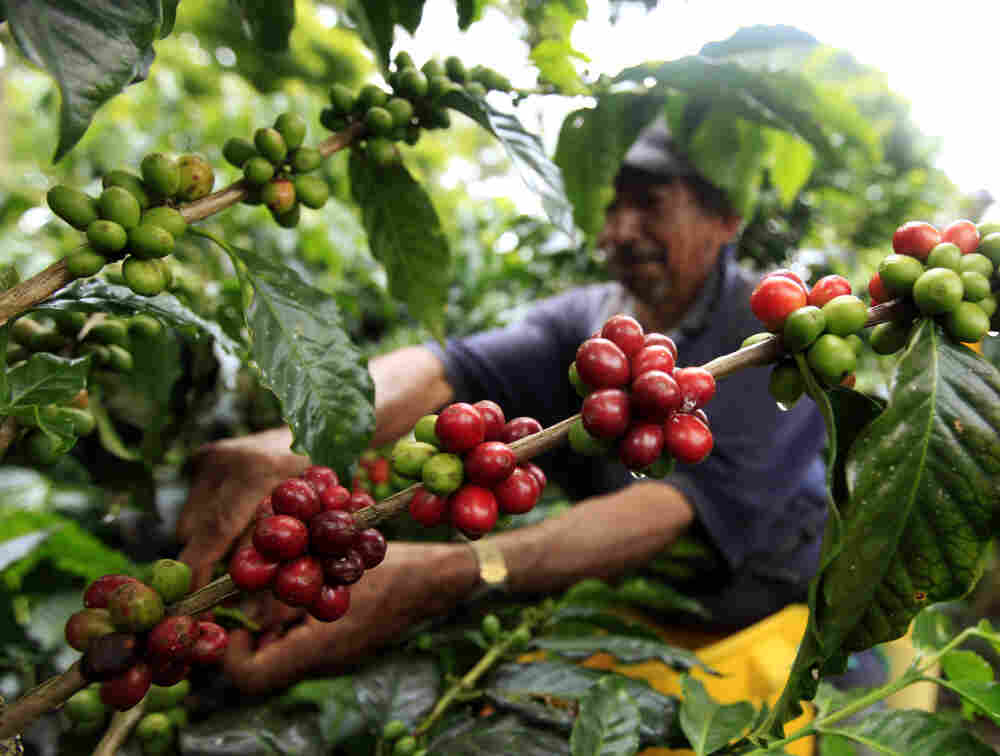 A coffee grower picks coffee fruits in a plantation near Montenegro in Quindio province, Colombia. Fair Trade USA wants to allow coffee from big estates like this one under its fair trade label. Jose Miguel Gomez/Reuters /Landov hide caption

When you buy food that is labeled fair trade, you do so to support farmers who meet certain social and environmental standards. But some companies now disagree about whether a new take on fair trade can really be called "fair."

Traditionally, fair trade has been "the idea that the small farmer gets a direct connection to the U.S. consumer or the European consumer; it's a way that people in their everyday lives can support farmers directly and make the world better," Rink Dickinson, president and co-founder of Equal Exchange, told Murray Carpenter on Morning Edition. Equal Exchange is a Massachusetts-based, worker-owned cooperative that now does $40 million in sales of fair trade products a year.

But as Carpenter reports, another major player in the fair trade industry wants to change that definition. Fair Trade USA, the country's largest fair trade certifier, recently decided to allow some coffee grown on big farms to earn the label.

One reason, the group says, is to help the poor farmers that work on plantations. It also wants to certify products with as little as 10 percent fair trade ingredients; that's half of what's allowed in most countries.

Paul Rice is president of Fair Trade USA, which was founded in 1998. He says fair trade is reaching the limits of growth, and allowing more farms to participate will expand the program's reach.

He has seen the movement grow dramatically, supported by sales from companies like Green Mountain Coffee Roasters and Starbucks. This year Fair Trade USA will certify 130 million pounds — nearly 5 percent of the U.S. coffee market.

"If farmers and farm workers are demanding help, and looking to fair trade for help, if the industry is saying, 'we want to do more, let us do more,' why would you want to keep it small?" Rice told Carpenter.

This doesn't sit well with Dickinson. "That's no longer fair trade," he says. "That's another form of socially responsible business."

According to a recent report in the New York Times, many fair trade programs around the world already certify bananas, tea and flowers from large farms. But fair trade coffee and cocoa are typically grown on small farms organized into cooperatives.

"If your goal for fair trade is primarily to improve conditions by some margin, fair trade could work with plantations," Setrini told Carpenter. "But if your goal is to set in motion a more dynamic and democratic process of development at the local level in producing countries, there isn't much historical evidence to say that can happen on plantations."

Either way, the proposed changes in the industry may make it harder for consumers to know just who is growing their coffee, and just how fairly they are treated.