Accessibility links
Bonbons For Breakfast? Most Kid Cereals Pack Enough Sugar To Be Dessert : The Salt A new report by the Environmental Working Group finds that the vast majority of popular cereals marketed to kids exceed guidelines that call for no more than 26 percent added sugar by weight.

Bonbons For Breakfast? Most Kid Cereals Pack Enough Sugar To Be Dessert

Bonbons For Breakfast? Most Kid Cereals Pack Enough Sugar To Be Dessert 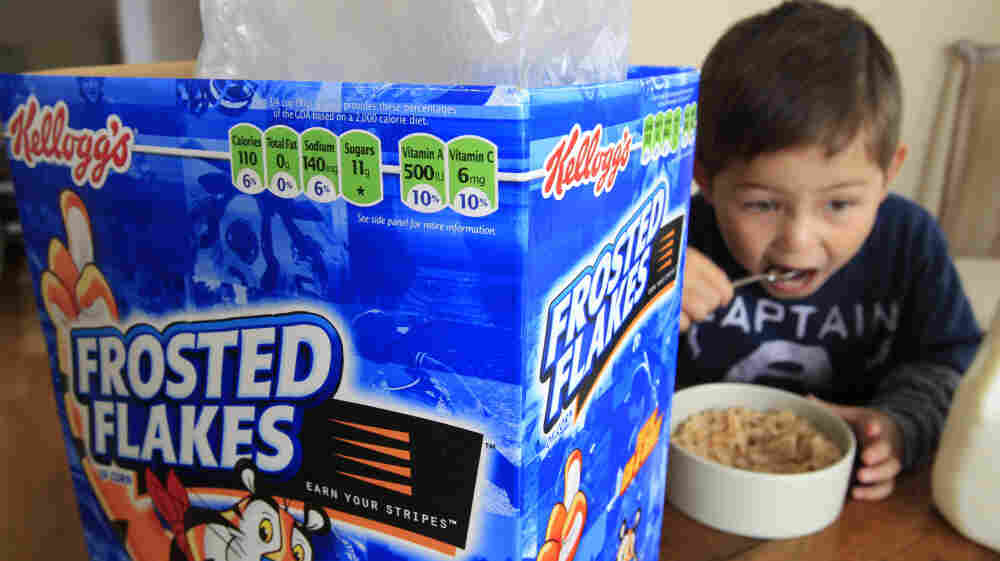 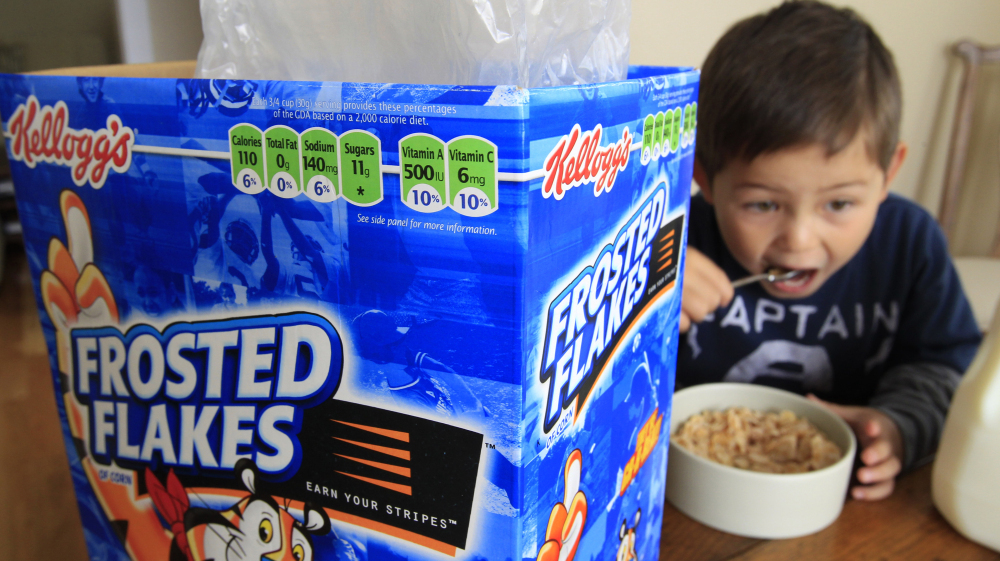 Nathaniel Donaker, 4, eats Kellogg's Frosted Flakes cereal at his home in Palo Alto, Calif. Frosted Flakes is 27 percent sugar, according to a report by the Environmental Working Group.

To many a mom, you can't go much lower than a Twinkie. The famous snack sort of epitomizes nutritional bankruptcy.

So now we learn that breakfast cereals such as Kellogg's Honey Smacks are even worse — in terms of sugar content — than a Twinkie. One cup of the cereal has 20 grams of sugar, compared with 18 grams in the cake. (The recommended serving size on the label is three-fourths of a cup.) Well, that gets our attention.

A new report by the Environmental Working Group finds that that vast majority of popular cereals marketed to kids — 56 out of the 84 EWG looked at — don't meet the voluntary guidelines proposed earlier this year by the federal Interagency Working Group on Food Marketed to Children.

And sugar isn't the only concern. EWG also found in its evaluation of 84 cereals that many also contain more sodium and fewer whole grains than the guidelines call for.

So, cereal companies, what say you? Well, Kellogg's vice president of nutrition, Lisa Sutherland, responded to us with a e-mail statement. She says Kellogg's has reduced the sugar content of its U.S. kids' cereals by 16 percent since 2007. Plus, she says Honey Smacks are not marketed to kids and are "seldom eaten by them."

"Today, our most popular kids' cereals have 1 to 12 grams of sugar and many are also a good source of fiber," Sutherland tells The Salt. And she points out that a bowl of cereal contains approximately 150 calories and is a source of added vitamins and minerals in the diet.

The claim doesn't impress many health advocates who are pushing for stricter regulations on marketing food to children. And they point to the stats that show obesity rates have more than tripled since 1980. And they're also concerned about how sugary beverages are marketed to kids, as we reported in October.

A study by Yale University's Rudd Center have found cereal makers spend upwards of $150 million annually marketing to children just on television. And, overall, the cereals have more sugar, calories and sodium than non-kid cereals, and less fiber and protein, according to the Rudd Center.

These reports aside, if you wanna keep better tabs on the nutrition of kids' cereals, we've got an app for you. Fooducate makes it easy to scan the barcode on any food product and get a quick grade, from A to F.

We asked Fooducate's Hemi Weingarten to scan the boxes of some of the cereals that landed on the EWG report's worst and best lists.

The lowest grade went to Quaker Oats' Cap'n Crunch's All Berries with a D+. The rest of the worst list were a notch above with C-. Weingarten says he wasn't surprised.

So which cereals get A's? "Shredded Wheat, Multi-Grain Cheerios: products that have just a few ingredients, and just a little sugar," says Weingarten.

But some of EWG's picks for best cereals don't all get top marks. For instance, Nature's Path Organic: Optimum Cranberry Ginger get A- on Fooducate with 3.5 teaspoons of sugar per servings. "That's still a lot of sugar," says Weingarten.