Accessibility links
Who Are The Young Farmers Of 'Generation Organic'? : The Salt There's a surge of youthful vigor into American agriculture — at least in the corner devoted to organic, local food. Thousands of idealistic young people who've never farmed before are trying it out.

For decades, as young people have been leaving farms behind, the average age of the American farmer has been rising. The last time the government counted farmers, in 2002, the average farmer was 55-years-old.

But there's a new surge of youthful vigor into American agriculture — at least in the corner of it devoted to organic, local food. Thousands of young people who've never farmed before are trying it out.

Some 250 of them gathered recently at a gorgeous estate in the Hudson River valley of New York: the Stone Barns Center for Food and Agriculture in Tarrytown.

Some of these young farmers already have their own farms. Some are apprentices, working on more established farms for a year or two. And others are still just thinking about it. But the overwhelming majority of farmers here at this conference want to farm without chemical fertilizers or pesticides.

They were there to learn skills — from seminars on soil fertility, handling sheep, and how to find affordable land — and just as importantly, to meet each other. In the evening, they played music and danced.

They represent a new breed of farmer. Very few of them grew up on farms. Most of them went to college. And now, they want to grow vegetables, or feed pigs.

Some talk about what they hope to accomplish.

"It was born out of a concern for the environment," says Brian Bates, who plans to work at a farm in northern Michigan after he graduates from Penn State. "I spent the first two years of college with one question in mind – basically, how can I have the greatest impact in my life in the world. And the thing that I kept coming back to, that everyone connected to, was food." 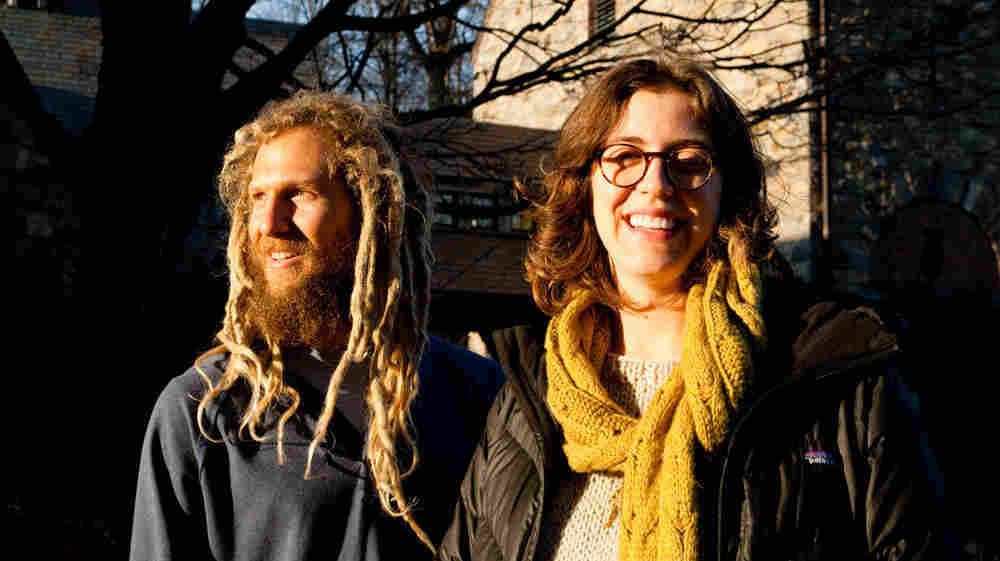 Steven "Shepsi" Eaton and Liz Moran are expecting a baby and say they hope to start their own farm soon. "[Farming] isn't to make a living," Moran says. "It's to create a certain lifestyle for myself and for the people around me". Maggie Starbard/NPR hide caption 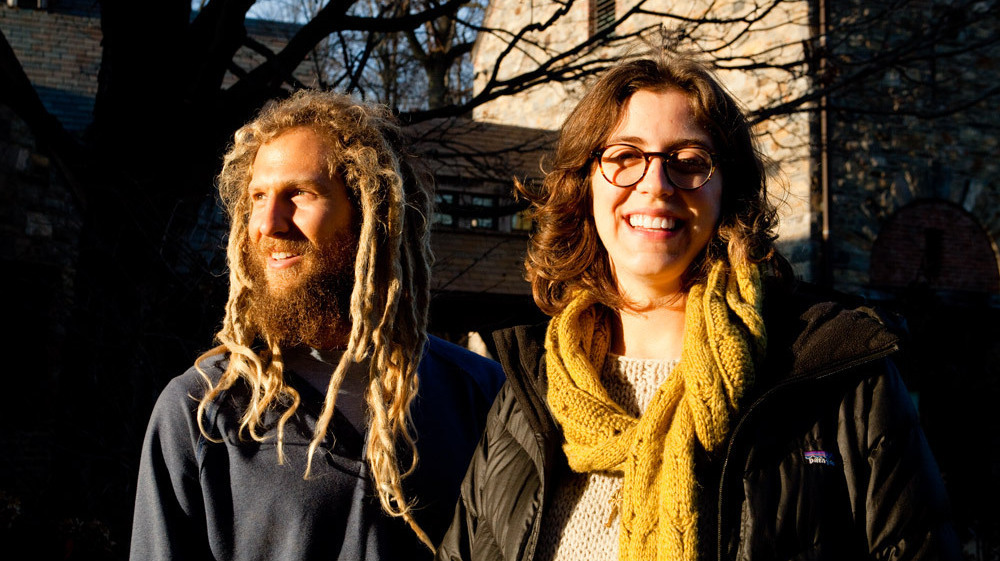 Steven "Shepsi" Eaton and Liz Moran are expecting a baby and say they hope to start their own farm soon. "[Farming] isn't to make a living," Moran says. "It's to create a certain lifestyle for myself and for the people around me".

Others say that they simply enjoy the work, the style of agrarian life, and the connection to food.

"I feel lost when I'm not farming, when I'm not out in the field. It's where I find the most peace and harmony in my life," says Liz Moran, who helps manage Quail Hill Farm in the eastern end of Long Island, New York.

"When I look around, and you're amongst the plants and the sunshine – that's my office, that's where I want to be," said Rodger Phillips, who grows food on an urban farm in Hartford, Conn.

Others talk about the satisfaction of doing something practical, creating something valuable. "Having a skill was really important to me. Having studied political science, I wanted to do something that was productive, that was real. To have a real skill, and be able to provide my family, my community, a vital element," says Kristin Carbone, who runs Radix Farm in Upper Marlboro, Maryland.

And then there was Lindsey Shute. "How did I get into farming? Because I started dating a farmer!" she says with a laugh.

This is an idealistic crowd; nobody says that they're doing it to make money. Some describe their farming as a kind of protest against the idea that success means a big paycheck, or as a protest against an economy dominated by big corporations.

Lindsey Shute's husband Ben has been running his own farm in Tivoli, New York, for ten years now. He says that the great thing about farming is that it's a really practical form of idealism. "It's all well and good – and important – to have political opinions, and protest, and things like that. But when you're farming, you get to live your values, and farm the world that you want to see," he says.

Nobody knows exactly how many young farmers like this there are. They certainly don't produce more than a tiny sliver of the country's food. But they do seem to be part of a real social movement. Organic farmers who used to spend part of the winter recruiting workers for the next summer now are turning people away.

This conference, which started four years ago, sells out. This year, it sold out months ahead of time.

But along with the enthusiasm, I heard uncertainty and even some anxiety — about making enough money, or whether they were quite ready to settle in one place for good. Many said that their parents wish they were doing something else – something less risky, and better-paying.

It made me wonder whether they'll really be able to stick with it.

So for a little perspective on this generation, I looked up a real old-timer of the local, organic food movement: Jim Crawford, who runs New Morning Farm, in south-central Pennsylvania. On weekends, he gets up before 4 a.m. and brings vegetables to markets in Washington, D.C.

When Crawford looks at today's new generation of would-be farmers, he sees himself, when he was younger. "I had exactly the same things in my head forty years ago," says. "Exactly the same."

In 1972, Crawford was in law school in Washington, D.C., and working on Capitol Hill, but not enjoying it much. Through happenstance, he ended up running a vegetable garden in West Virginia one summer. He really liked it, and got got more serious about it. But soon the summer was over.

Farming — the work, and the independence, and the connection to something as important and real as soil and food — was the one thing that he wanted to throw himself into. And he's been doing it ever since. But it wasn't always a big happy folk dance.

"I can remember feeling kind of desperate, and having many failures, a lot of failures, in the first couple of years of growing crops and not really knowing what I was doing," he says.

But there's one thing he had, and it's a big reason why he's still farming. He loved the business side of it: finding customers and making a living on his own.

That sense of farming as a business is probably the biggest thing the young farmers have to learn, he says. It's what he preaches to the young apprentices who come to his farm to work. (He's had more than 200 such apprentices over the years.)

Ideals are great, he tells them. "But if you're going to stick with it, and expect to make a living at it, you've got to be realistic about the business aspects: Money, and managing money, and borrowing money, and all the things that a business person has to do. And you have to accept that, and learn to like that – somewhat, at least – and be willing to be good at that."

That may mean compromises, he says. Maybe it means burning a little more fossil fuel, so you can get your vegetables to a city, where people pay higher prices.

That's OK, Crawford says. Making tradeoffs, but holding onto what's most important - that's what growing up is all about.