Accessibility links
U.S. Honey Retailers Try To Clear Away Suspicion : The Salt More than half of the honey that Americans consume today is imported from abroad, but some say the industry is plagued by forgery and illicit products from Asia. Five of the biggest American honey retailers are now setting up a system that they hope will clear away suspicion that illegal Chinese honey has infiltrated the honey supply. 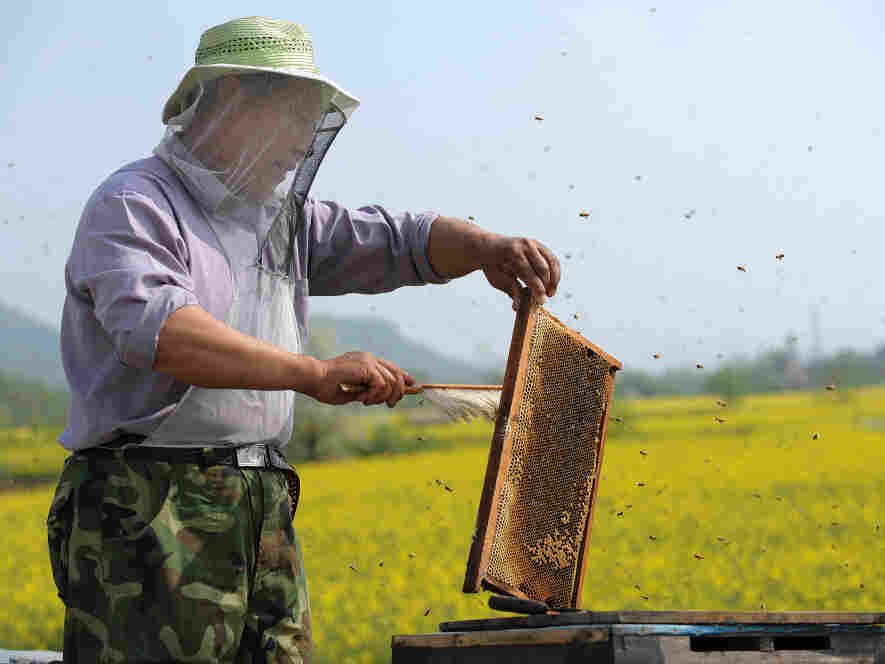 A Chinese beekeeper harvests honey beside a rapeseed field in Anhui province. China is a major producer of honey and bee products. AFP/AFP/Getty Images hide caption 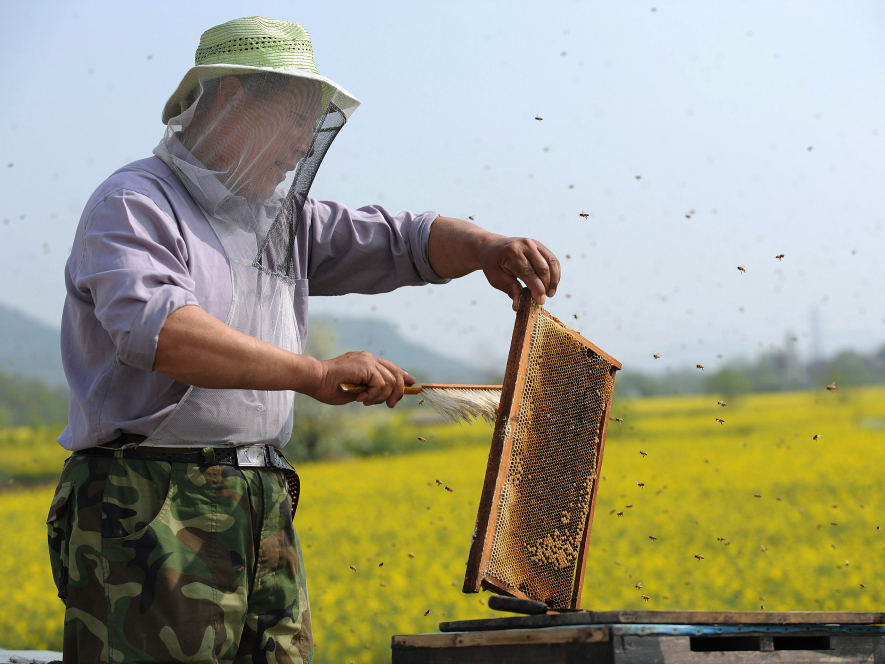 A Chinese beekeeper harvests honey beside a rapeseed field in Anhui province. China is a major producer of honey and bee products.

Honey is the most natural of sweeteners, coming to us directly from bees and flowers.

Well, maybe not so directly. These days, a long supply chain often links beehives half a world away with the jar of honey in your kitchen. And there's suspicion in that supply chain: global trade disputes; accusations of unfair competition; even honey identity-switching.

To get to the bottom of all this unwholesome controversy, we paid a visit to Dutch Gold Honey in Lancaster, Pa. Dutch Gold is one of the country's top 10 honey packers. It sells honey under many different labels, including the house labels of some big supermarket chains.

It is also, as it happens, the birthplace of the now-ubiquitous bear-shaped honey bottle. "Believe it or not, the person who invented the honey bear was Ralph Gamber, the founder of Dutch Gold," says Jill Clark, the company's vice president of sales and marketing. "He and his wife were having dinner with a couple from out west, and they said, 'We really need a new unique container for honey! Winnie the Pooh's really popular, and so is Yogi the Bear, so why don't we come up with a squeezable honey bear?'"

That was 1956. The honey business was simpler back then. For one thing, American bees made most of America's honey.

Today? Well, just take a peek inside Dutch Gold's warehouse. You see tall stacks of 50-gallon drums, all filled with honey. They come from North Dakota, South Dakota, California, Argentina, Vietnam and India. More than half of all the honey that Americans consume today is imported from abroad.

But did all that honey really come from bees in the countries that are listed on those steel drums? This is where the accusations of smuggling and forgery arise.

There are special restrictions on honey imports from one country: China. And some Chinese honey exporters have been trying to evade those restrictions.

China is the world's biggest producer of honey, and up until a few years ago, it shipped large quantities of honey to the U.S. Chinese honey was cheap. It was so cheap, in fact, that American beekeepers complained it was driving them out of business.

They complained that China was dumping that honey, selling it for an artificially low price.

In 2001, U.S. officials agreed. For most of the following decade, the U.S. tried different ways to slow down imports of Chinese honey, but nothing worked too well. Finally, in 2008, officials simply imposed huge import duties on all honey from China. This made Chinese honey very expensive, and it almost completely shut down imports of honey from China.

But did it really? Dutch Gold's Jill Clark says statistics of U.S. honey imports tell a curious story. At the moment when imports of Chinese honey dried up, "all of a sudden we saw these other countries starting to sell a lot of honey into the U.S., and they weren't countries that tended to have any commercial beekeeping." The big increases came from some of China's neighbors: Taiwan, Malaysia and Indonesia.

Clark says that Dutch Gold figured it had to be falsely labeled honey that was really coming from China. "We were offered it many times, and with these very cheap prices we knew exactly what it was. It was nothing that we wanted anything to do with whatsoever," she says.

There was more evidence than just the price. There was pollen. When bees collect nectar from flowers, they bring back pollen, too, and it ends up in raw honey. Scientists can look at those grains of pollen under a microscope and tell if they came from flowers that grow in China but not in Indonesia.

Ron Phipps, president of a honey importing company called CPNA International, got some samples of the Indonesian and Malaysian honey, and decided to check them out. "We've had them tested, and the pollen content was typical of China and not of those countries," he says.

The evidence that this was really Chinese honey was so convincing that U.S. government officials stepped in to shut down those imports, too. They held up shipments, demanding more documentation. They indicted some Chinese and German honey dealers for fraud.

The honey from Indonesia and Malaysia dried up late last year, as quickly as it appeared.

But Phipps believes that Chinese exporters have found a new trade route. This year, he says, "we saw a huge surge in Indian honey entering our country."

Phipps is convinced that this is really Chinese honey, too. But this time the evidence is not as clear. Unlike Malaysia and Indonesia, India does have a history of honey production. Also, laboratories are not finding Chinese pollen in this honey.

It's suspicion, not proof. But as long as the U.S. tries to block honey from the world's biggest honey producer, there will be suspicion that China is finding ways around the American blockade. Every shipment of honey from Asia is suspect.

Some honey retailers have decided that this is bad for business, and bad for the image of honey.

Five of the biggest honey retailers in the country — including Dutch Gold — are setting up a system that they hope will clear away all that suspicion.

Eric Wenger is president of True Source Honey. Soon, he's going to Vietnam to help with the first audit of a Vietnamese honey exporter.

"The question we want to answer is: Does that exporter only purchase honey from beekeepers in that country?" he says.

The exporter will give the True Source auditor a list of the beekeepers from whom it buys honey. "Then the auditor will randomly select a number of those beekeepers, go out to that beekeeper's apiary, and evaluate the capacity of that beekeeper to produce the volume that that exporter claimed was purchased and shipped," says Wenger.

If everything checks out, that exporter is certified. But even after that, True Source will take samples from every shipment of honey and send those samples to a lab in Germany to see if the pollen matches the flowers that are actually blooming in Vietnam.

True Source wants to expand this system globally. One exporter in India is already certified.

Jill Clark, from Dutch Gold Honey, says these sorts of audited, verified supply chains are getting more common throughout the food business. In some cases, governments are requiring it.

"With all the food safety and food security issues, knowing where your food comes from right now is incredibly important," she says.