Accessibility links
With Hanukkah Microbrews, A Taste of Jewish History : The Salt Are Jews really the people of the hops? A historian says beer isn't particularly Jewish. But it is a part of Jewish life, and now several microbreweries are reviving the tradition of Jewish beer with seasonal brews to celebrate Hanukkah.

An early predecessor to the Hanukkah brews of today, Russian Jew Max Lapides stands with his sons in front of the Bauernschmidt Brewery Saloon in Baltimore, circa 1900. Gift of Rose Sacks. Courtesy of the Jewish Museum of Maryland, 1988.227.1 hide caption

toggle caption
Gift of Rose Sacks. Courtesy of the Jewish Museum of Maryland, 1988.227.1 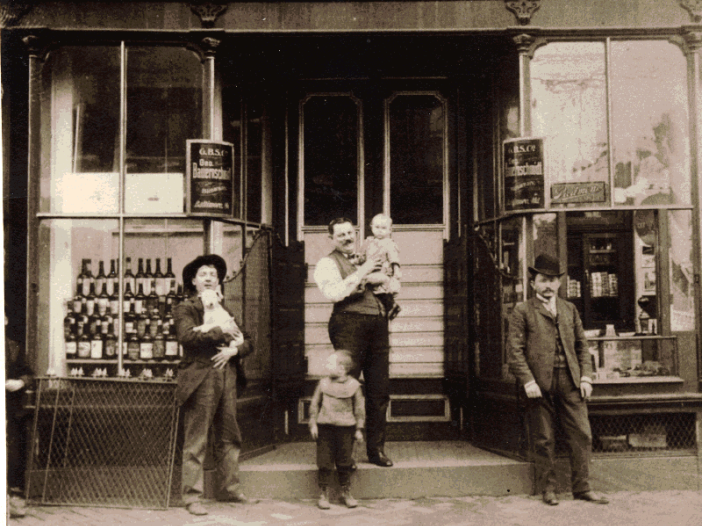 An early predecessor to the Hanukkah brews of today, Russian Jew Max Lapides stands with his sons in front of the Bauernschmidt Brewery Saloon in Baltimore, circa 1900.

During the holidays, many beer manufacturers roll out seasonal brews. But there's a relative newcomer for the festival of lights: Hanukkah beer.

Lompoc Brewing, in Portland, Ore., is one small, craft brewery that has added it to its winter lineup.

"We had a Jewish gentleman here ... and he wanted to make a Hanukkah brew," says David Fleming, the head brewer. "So we thought it was a great idea. We already had six Christmas beers going anyhow, so why couldn't we have a seventh one for Hanukkah?"

Lompoc ended up with a chocolate rye porter called 8 Malty Nights. It has become one of its more popular winter beers. And Lompoc is not alone – a few others, like Schmaltz Brewing Company, are also bringing Jewish beers to market.

But this isn't the first time Jews have gone into the beer business.

"The story ... begins really far back, at the Babylonian exile," says Marni Davis, the author of Jews and Booze and an assistant professor of history at Georgia State University. She says that even though beer is never mentioned in the Hebrew bible, it is kosher. And Jews have brewed it from Persia to Europe, and into America.

Davis has found lots of examples of central European Jews founding breweries. One of the biggest was New York's Rheingold Brewery, founded by Samuel Leibmann.

But Davis says that, for the most part, Jewish breweries cropped up in smaller, non-German cities – places like Denver, or Anaheim. Unfortunately, even the most successful of these breweries had to empty out their kegs in 1919, at least officially.

"The most important Jewish beer entrepreneurs during Prohibition were the bootleggers, the gangsters," says Davis. "They were operating with Irish and Italian immigrants, these sort of inter-ethnic crime syndicates really helped to maintain the presence of alcohol, and beer in particular, in American life."

After Prohibition, small Jewish breweries — like small breweries everywhere — were edged out by the big guys. It's only in the last few years, with the microbrewery revival, that we're starting to see them again.

So does this long history mean that we've had it all wrong? That Jews really are the people of the hops? Davis says beer isn't particularly Jewish. But it is a part of Jewish life.

"Beer is one of the ways that Jews can become part of the culture that they're in, and they can do it as Persians, they can do so as German-Americans in the beer gardens of Cincinnati, and they could do it today, as producers of cheeky beers that are coming out of craft breweries right as we speak," says David.