Accessibility links
What A Global Flavor Map Can Tell Us About How We Pair Foods : The Salt If you think all American food tastes alike, you may be on to something. A chemical analysis of flavors around the world found that Americans cook with flavors that are chemically similar, like eggs, milk, and vanilla, while East Asians go for chemical contrast. Think shrimp and lemon. 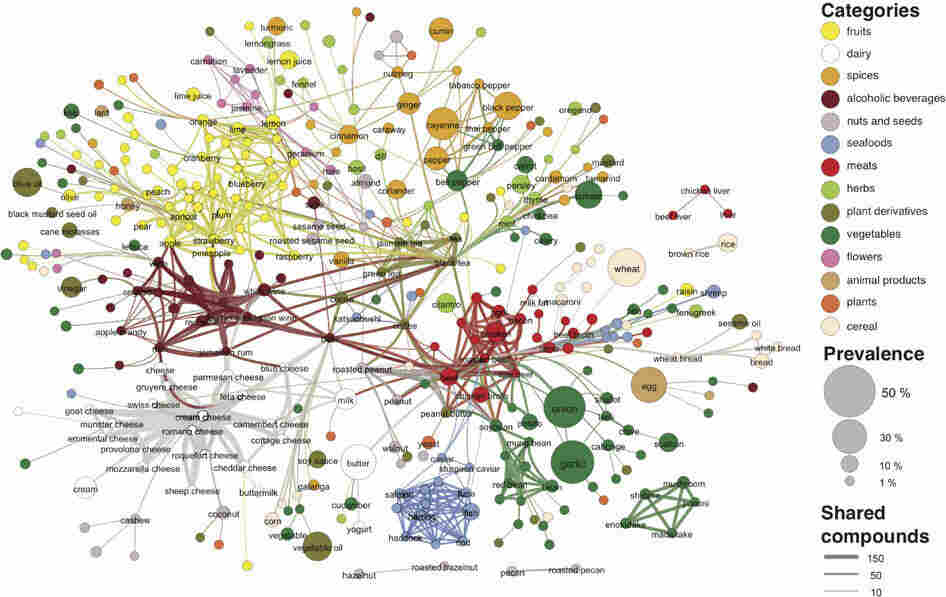 Each node in this network denotes an ingredient, the color indicates food category, and node size reflects the ingredient prevalence in recipes. Two ingredients are connected if they share a significant number of flavor compounds, and link thickness representing the number of shared compounds between the two ingredients. Yong-Yeol Ahn, Sebastian E. Ahnert, James P. Bagrow, and Albert-László Barabási hide caption 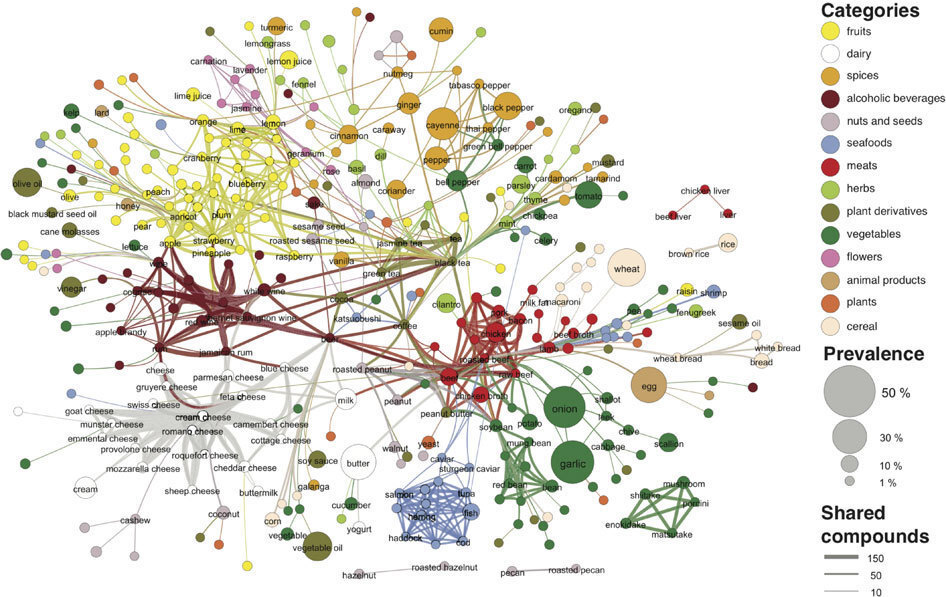 Each node in this network denotes an ingredient, the color indicates food category, and node size reflects the ingredient prevalence in recipes. Two ingredients are connected if they share a significant number of flavor compounds, and link thickness representing the number of shared compounds between the two ingredients.

There's a reason why Asian dishes often taste so different from the typical North American fare: North American recipes rely on flavors that are related, while East Asian cooks go for sharp contrasts.

That's the word from researchers at the University of Cambridge, who used a tool called network analysis to chart the relationship between chemical flavor compounds. They did it to test the widely believed notion that foods with compatible flavors are chemically similar.

It turns out that's true in some regional cuisines, particularly in North America – think milk, egg, butter, cocoa, and vanilla. But in East Asia, cooks are more likely to combine foods with few chemical similarities – from shrimp to lemon to ginger, soy sauce, and hot peppers.

The scientists used 56,498 recipes to test their questions about "the "rules' that may underlie" recipes. (They mined Epicurious and Allrecipes as well as the Korean site Menupan.) They note that we rely on a very small number of recipes — around a one million — compared with all the possible food and flavor combinations available to us — more than a trillion by their estimates.

To illustrate their findings, the scientists decided to show, not just tell. The result: A stunning chart showing which foods are chemical cousins, and which are flavor outliers. Cucumber stands apart, while cheeses cluster in a clique, as do fish. Cumin connects to ginger and cinnamon, while tomato stands in a strange subgroup with chickpeas, mint, cardamom and thyme. 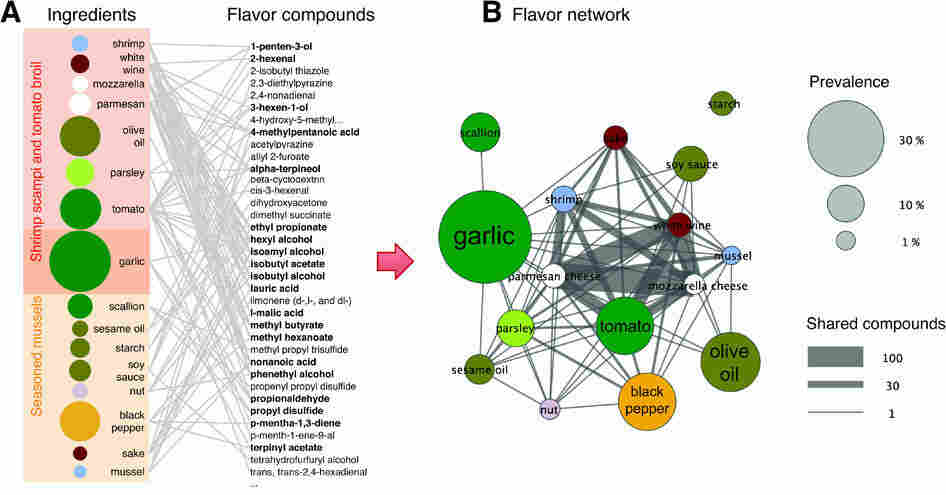 The work appeared in Scientific Reports, an open-access journal from the Nature Publishing Group.

This network is beautiful enough to hang by the stove, and a big improvement on the usual eyeball-numbing illustrations in scientific journals.

But with people accustomed to eating food from around the world, those preferences may be shifting. A new survey declared salty caramel to be the hot North American flavor for 2012. Can garlic-soy caramels be far behind?