Accessibility links
A Christmas Pudding In The Mail Carries A Taste Of Home : The Salt My mother always made Christmas puddings. Nowadays, my sister and brother-in-law send me one every year from England. They use a mid-Victorian recipe handed down from a Quaker. Unlike other Christmas treats, a well-made, properly sealed Christmas pudding will keep for a year, or more. 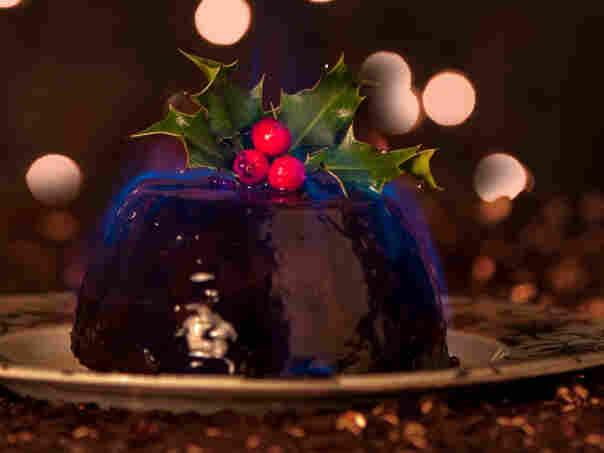 The pudding's dark glossy dome is flamed with brandy and carried to the table before the shimmering blue aura dies away. Chris Elwell/iStockphoto.com hide caption 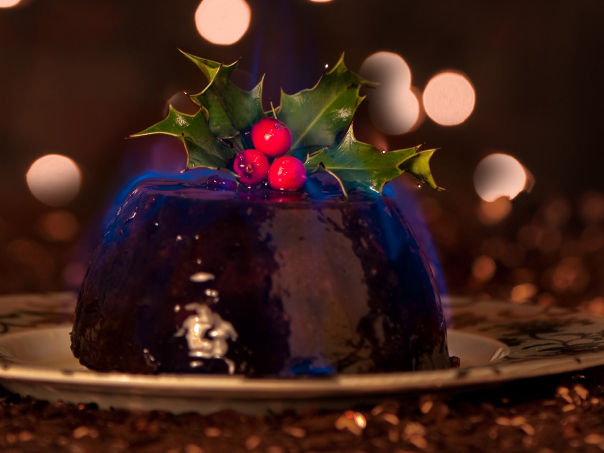 The pudding's dark glossy dome is flamed with brandy and carried to the table before the shimmering blue aura dies away.

Any day now it will arrive stamped by the Royal Mail: a truly homemade Christmas pudding from my family in England.

My mother always made Christmas puddings. And before moving to the U.S., I would make two or three puddings every November, too. Now it's my sister and brother-in-law who keep up the tradition. They use a mid-Victorian recipe handed down to my brother-in-law's father by his mother, the former Miss Mortlock. She was a Quaker so these are teetotal puddings.

Today, Christmas puddings generally start out as a gravelly mixture of dried and candied fruits; ground almonds; spices such as nutmeg, cinnamon and clove; suet; and dark sugars — all bound together with some combination of flour and breadcrumbs, eggs and milk. Some people also include chopped or grated carrot.

The ingredients are all piled into a large earthenware bowl, often with a generous slosh of stout, rum, or brandy, or even all three. This is England we're talking about! Everyone from the baby upwards then takes a turn at stirring the mixture clockwise, and making a secret wish.

While the custom of getting the household together to stir the pudding may be a Victorian development, the ingredients take you straight back to the Middle Ages. Suet — the white, waxy fat from around the kidneys and loin of cattle and sheep — is a remnant of the chopped meat that would have been in the semi-liquid "potage" that was the ancestor of today's pudding recipes.

The pudding — a soupy, spicy concoction of meat, fruit, grains and root vegetables — was a sort of early "fusion" cookery. Crusaders returning from the Holy Land brought back ingredients and a taste for Middle Eastern food that seems to have stuck.

Food history is always a bit murky, but potages seemed to have morphed into puddings when, as food historian Alan Davidson has suggested, someone realized in the 17th century that the meaty mixture could be boiled or steamed inside a cloth.

Puddings became a great hit; kitchens started to smell like laundries, and rich boiled puddings made with meat, spices and dried fruit were a treat year-round as well as at Christmas. As Daniel Defoe wrote in New Voyage round the World in 1725, "I gave the Cook order to Make every Mess a good Plumb-Pudding."

Over the next 200 years, these round, cloth-wrapped puddings gradually lost their meat (except for steak and kidney pudding), while gaining a great deal of sugar. Transformed into the likes of spotted dog, jam roly poly, Sussex pond pudding, Oxford pudding and treacle pudding, they became the grand finale of a meal, rather than the beginning.

By the mid-19th century, plum pudding seems to have become an exclusively Christmas dish. The Oxford English Dictionary records the first use of the phrase "Christmas-pudding" in 1858 in a novel by Anthony Trollope.

Back in our modern kitchen, the last thing to do before steaming the mixture is to add the charms. Like the bean in a Twelfth Night Cake, these predict the finder's future in the year ahead. It's usually just a silver sixpence for prosperity. But other families may add a ring for marriage, a thimble for a contented single life and a horseshoe for good luck.

Finally, the fragrant goop goes into china pudding basins, which began to replace pudding cloths in the nineteenth century. Each bowl is sealed with layers of greaseproof paper and foil, tied with string, and steamed for 5 hours. It's possible to use plastic bowls with lids these days, and even a pressure cooker, but a warm, steamy kitchen is a joyous refuge during a miserable English winter.

With luck, you've been organized enough to make these puddings on or around Stir Up Sunday, the last Sunday before Advent. This means they have a few weeks to sit in a cool place for the flavors to blend and mature.

A well-made, properly sealed pudding will actually keep for a year, or more. For me, it's an extra special treat to eat a last year's pudding, which is denser, sweeter, chewier and even more magical than the more recent production. (And yes, the alcohol and prolonged steaming means they are still safe to eat!)

On Christmas Day itself, the pudding is steamed for another 2 hours, and then turned out onto a plate. A sprig of real (not plastic!) holly goes on top — a reference to Jesus's crown of thorns, according to some sources. And then the dark glossy dome is flamed with brandy and carried to the table before the shimmering blue aura dies away.

For me, a slice of pudding, with a dollop of fresh cream or brandy butter, is the one taste of Christmas in England that I cannot bear to miss. Which is why I'm waiting so nervously for this year's brown paper parcel to arrive.

This is the recipe my brother-in-law Chris Going uses. It was probably written down in this form in the 1950s. You'll notice some British terms for ingredients and measurements. See the notes below for the American equivalents.

Mix all the dry ingredients. Add lemon juice and chopped apple. Then leave mixture in a cool place for 12 hours. Mix in eggs and pack into three size 36 capacity basins. Cover well with greaseproof paper and tie down with a cloth. Boil for about 6 hours, topping up with water. On Christmas Day, steam for 2 hours.

NOTES: If you want to try this in the U.S., use white raw sugar in place of demerara. Chopped, candied citrus rinds can replace mixed peel, but try and avoid lime if you want to be authentic. Basins are one and a half to 2 English pints in capacity. An English pint is 20 fluid ounces. If you can't find suet, substitute chilled butter, which you can grate into the mixture.