Accessibility links
Inhalable Caffeine: Party Drug Or Handy, Pocket-Sized Boost? : The Salt AeroShot, a breathable form of caffeine, offers coffee and energy drink addicts a new way to get their fix. But some say the product is being marketed like a drug, and could be a health risk for young people. 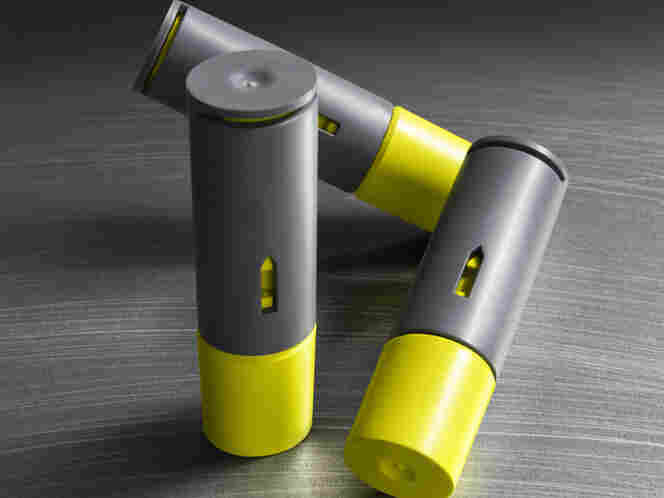 One AeroShot contains 100 mg of caffeine and sells for $2.99, making if roughly comparable to buying a latte. Breathable Foods hide caption 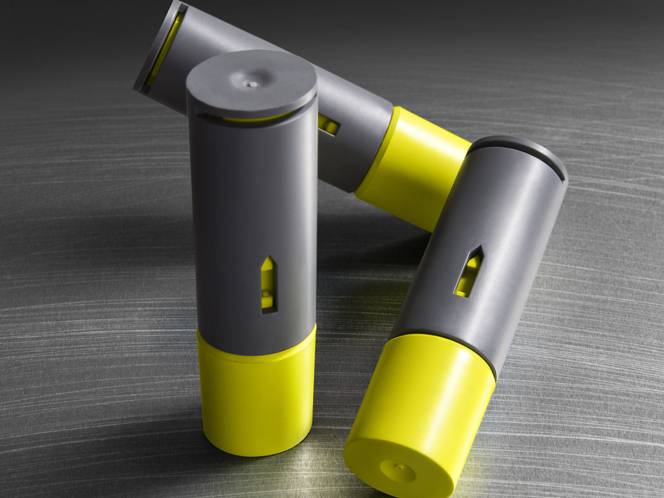 One AeroShot contains 100 mg of caffeine and sells for $2.99, making if roughly comparable to buying a latte.

If you've ever lamented the time and effort it takes to brew or procure a cup of coffee, this might perk you up. "Breathable Energy. Anytime. Anyplace."

That's the campaign slogan for AeroShot, a plastic inhaler, roughly the size of a lipstick tube, filled with a powdery, calorie-free mix of caffeine, B vitamins, and citrus flavors. It's slated to hit stores in January, just in time for the New Year.

But some aren't so sure selling caffeine in pocket-sized tubes — and marketing it to young people — is a great idea.

Sen. Charles Schumer (D-NY), for one, says it could be a dangerous health hazard if it gets mixed with alcohol. Just last week, he sent a letter to U.S. Food and Drug Administration Commissioner Margaret Hamburg detailing his concerns.

The caffeine market is already a crowded place, between all the coffee, sodas, energy drinks, and novelties ranging from caffeinated gums to a chapstick called Spazzstick.

But AeroShot is unique, its creator says, because it allows you to control the dosage. "We often overdose ourselves [with caffeine]," David Edwards, inventor of the AeroShot and a professor of biomedical engineering at Harvard, tells The Salt. That's part of what leads to the nasty spike and withdrawal cycle that leaves caffeine addicts feeling drowsy. With AeroShot, "you take it when you need it, and as much as you need."

Since 2007, Edwards has been teaming up with French chefs like Thierry Marx and experimenting with how people experience the tastes and sensations usually connected to foods. Early experiments included an inhalable chocolate called Le Whif. The idea was to maximize the dessert experience by keeping the essence of chocolate while nixing the calories.

In that sense the AeroShot could be an appealing alternative to sugar-laden energy drinks, Edwards says.

Caffeine has always been an addictive psycho-stimulant, but caffeine culture is changing. The coffeehouse is still alive and well, but energy drinks and other caffeine products are increasingly associated with dance clubs and extreme sports.

Schumer and others are worried that kids will combine AeroShot and alcohol, just as they have with Four Loko. That combination is proving a dangerous one — just ask some New York pediatricians who saw a big jump in hospitalizations in kids after Four Loko hit the market.

"Caffeine products are being reformulated to be sexy and appealing," says Stacey Sigmon, a professor of psychiatry at the University of Vermont. Marketing like this video from AeroShot's October launch in Paris reinforce that, with images of clubgoers enjoying the product with a glass of wine.

Sigmon tells The Salt she does find some features of the AeroShot druglike, including the attempt to cram more and more stimulant into a smaller and smaller package and the idea of breathing in the caffeine.

Despite the novelty of breathing in caffeine, AeroShot is not actually inhalable. Edwards says they're way too big to get past the back of your throat and into your lungs, so digesting the caffeine is the same basic process for the AeroShot as it would be for a beverage.

Which is a good thing, Sigmon says, because a truly inhalable caffeine product, absorbed through the lungs, would indeed be a worrisome sign. "That gets to the brain extremely quickly," she tells The Salt.

So while breathable caffeine isn't going to turn you into a drug addict, but does it taste good? Is it fun?

The Salt enlisted half a dozen NPR interns to give AeroShots a try. Reactions ranged from "breathing caffeine is going to change my life" to "This is awful and I would never buy one."

Taste was a major issue for our testers, with many describing the AeroShot as unpalatably bitter. Nobody said they'd be willing to give up their java ritual for the inhaler, but some said they'd consider throwing a tube in their purse or pocket for an emergency energy boost.