Accessibility links
For Russians, New Year's Eve Remains The Superholiday : The Salt In Russia, New Year's reigns supreme as the food holiday, even though Christmas returned with the end of the Soviet Union. Russian immigrants in the United States continue the tradition, which demands a nightlong feast of herring, caviar, pickles, salami, and — well, that's just for starters. 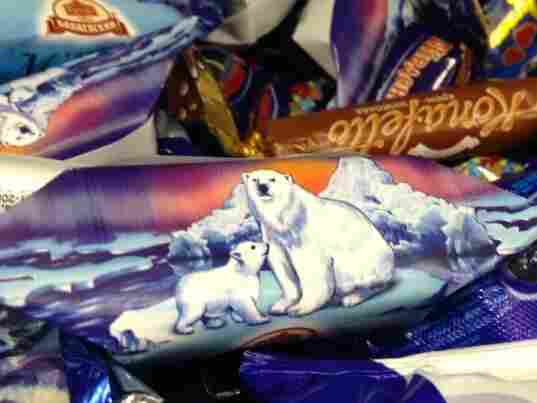 While for many people the frenzy of holiday cooking and feasting is subsiding, for Russians, it's just revving up.

During the Soviet era, Christmas was erased from the calendar. But its traditions were too strong to suppress; they were transplanted to New Year's.

On New Year's Eve in Russia, people eat and drink through the night, taking breaks from the festivities to stroll outside in the snow and visit neighbors. In the morning, children wake up to find presents under the tree, delivered by a bearded guy in a red suit. That guy is not Santa but Ded Moroz, or Father Frost. He is aided not by elves, but by his granddaughter, Snegourochka.

The Soviet Union may be long gone, and Christmas no longer forbidden, but Novy God endures as the superholiday of Russian winter. And the many Russian immigrants in the United States continue that tradition.

This morning I made a run to Russian Gourmet in McLean, Va., just down the road from the CIA. I've lived in Russia, and my husband was born and raised in the Soviet Union, but I'm still dazzled, and daunted, by the ingredients for a Russian New Year's celebration. It's not a short list.

There are pelmenyi, of course — little, juicy Siberian meat dumplings served with rich Russian sour cream (other lands know them as pierogies). There's no shame in buying them frozen, because that's how the Siberians store them through the winter.

There's herring, too, pickled or prepared as selyodka pod shuba – in a fur coat. In this case, the fur is beet salad, coated with mayonnaise. And there are plates of sliced salami; Moscow-style is the best.

Salads are essential, including Olivier salad, a potato salad enhanced with chicken or meat and mayonnaise, and salad vinagret, a beet-and-potato salad dressed with olive oil. To be truly authentic, each salad must include canned peas.

Pickles are the traditional accompaniment to vodka, be they pickled forest mushrooms, cucumbers, or tomatoes from the dacha (or the jar in the Russian store). Dark bread is a must with them.

Sliced cheese would be nice, too. And caviar; either traditional black sturgeon caviar, or red salmon caviar from the Russian Far East. If your budget can't quite handle that, the spread called eggplant caviar will do. Oh, and some pirogi, calzone-like turnovers that can be savory (stuffed with chopped egg and dill, perhaps) or sweet (with apples).

And that's just for starters. Sometime long after the new year has begun, a hot course of chicken with mashed potatoes, or stuffed cabbage, or other meat dishes will appear. So pacing is crucial.

Dessert will include fresh fruit, tortes, and of course Russian chocolate: fancy boxed chocolates for the grownups, and little brightly wrapped ones for the children, with drawings of polar bears and squirrels. Any Russian child would spot those a kilometer away.

If you think that after a celebration of this magnitude it would be hard to return to work, you're right. Some Russians continue the party by observing Orthodox Christmas, which falls on January 7 in the Julian calendar used by the Russian Orthodox Church, then Old New Year on January 14. After that, alas, even the Russians have run out of holidays. It's time to sober up and trudge back to the routine.

Should you choose to try to make a few of these treats, there are simple recipes on sites like RusCusine.com. But since my Russian mother-in-law is a fiendishly good cook, I rely on Anya von Bremzen's Please to the Table: The Russian Cookbook, for authentic interpretations explained for American cooks.