Accessibility links
In China, Finding A New Way To Eat In Times Of Plenty : The Salt As people get richer, they tend to get fatter. That's what's happening in China, where 25 percent of adults are now obese or overweight. But some Chinese are discovering that it's possible to enjoy times of plenty and still stay slim. 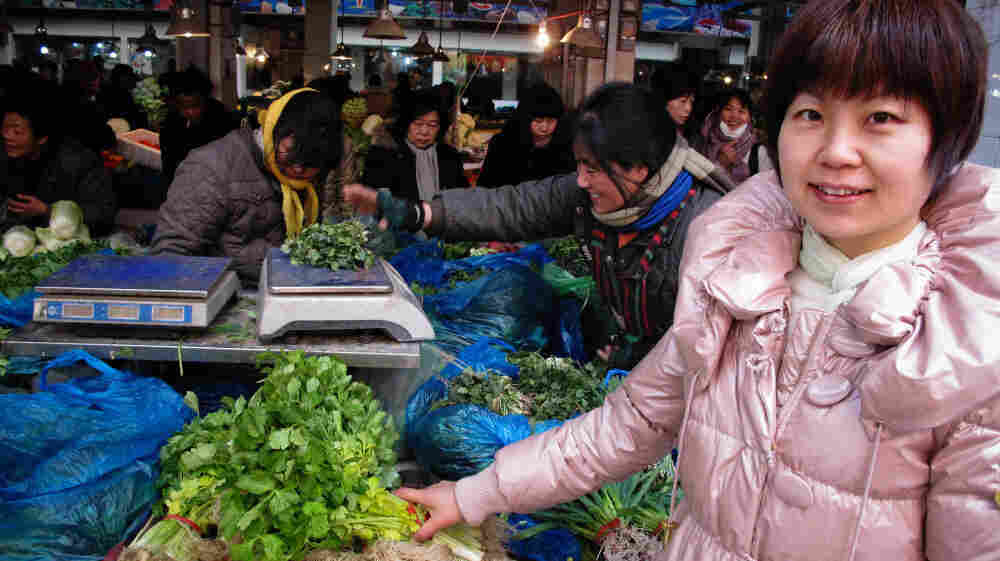 Anna Hu at the Ao Hua Farmers Market in Shanghai. After years of working long hours and eating only in restaurants, Hu has learned how to cook vegetables and eat more healthfully. Eliza Barclay/NPR hide caption

As people's incomes rise in a developing nation, so does the amount of food they eat. That's what has been happening in China for the past 30 years. But many people, especially in the middle class, are discovering that you don't have to eat and eat just because there's plenty of food available.

Still, fast food has become a habit for a lot of people. KFC first opened its doors in Beijing back in 1987 and now operates more than 3,000 stores in China. McDonald's has about half that many, and there are dozens of Chinese chains, too. It's no surprise, then, that Chinese people are getting fat.

But fast food is only part of the problem. People are also just eating more.

"More, more, more of everything — larger portions, with more ingredients, more salt, more sugar, more oil, more fats," says Paul French, a market analyst in Shanghai who has written a book called Fat China. "Breakfast and lunch and dinner and supper and grazing with snacks during the day. And drinking fizzy drinks rather than tea."

Public-health experts in China say obesity has become a serious problem: Twenty-five percent of adults are overweight or obese, according to a 2008 study published in Health Affairs. But Cai Meqin, a nutritionist at Shanghai Jiaotong University, says all the overeating is partly a reaction to the food shortages under Chairman Mao a generation ago.

"At that time, Chinese people [did] not have much food to eat, so they [were] very slim, but right now we have much, much more food, so they eat more [and are] overweight," says Cai.

I visited the members of the Lu family at their apartment in Shanghai one evening while they were cooking dinner. Mr. and Mrs. Lu share three modest rooms in a concrete high-rise with their 25-year-old daughter, Junting, and a spoiled cat.

Mr. Lu moved to Shanghai from a remote town in the north before Junting was born. He says that the food rations of his youth shaped the way he ate decades later.

"Before, our living standard was not good, so when there was a chance to eat meat, we usually ate a lot," he says. 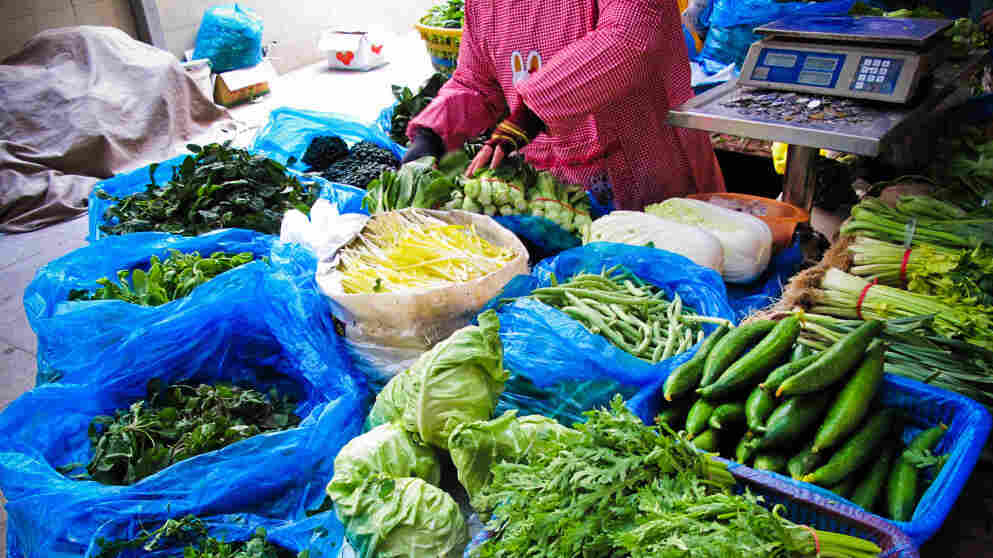 There is an astounding array of vegetables at the Ao Hua Farmers Market in Shanghai — far more than previous generations of Chinese every had to choose from. Eliza Barclay/NPR hide caption

When his income rose in the 1990s, he could, for the first time, eat as much meat as he wanted. And for a while, he did. But now he has realized it's not so healthful.

"Nowadays because we are living a better life, usually we don't eat much meat. I pay special attention to this issue so you can see I am very slim," he says.

Today, the Lus had what they call a "heavy lunch" with meat. So for dinner, Mrs. Lu is preparing congee, the traditional boiled rice soup. She says that by keeping some of the old ways of eating, their diet stays balanced and they don't eat too much.

Junting Lu, the daughter, is a translator for a Dutch newspaper. She's slender with long dark hair. She grew up eating mostly fast food. But now, like many people of her generation, she's eager to learn more about the food of the past.

"More and more people — I think they now realize that maybe going back to the traditional way of eating is better," she says.

But analyst French points out that a lot of traditional food — like yotiao, a double deep-fried dough stick that people love to eat for breakfast — isn't that healthful. He says what people really need is to learn how to make good choices.

And fortunately, there is plenty of nutritious food available.

Anna Hu is working to help people discover it. She has created a website with lots of information about healthful eating.

One day, she brought me to the Ao Hua Farmers Market in Shanghai. There is an astounding variety of vegetables there — far more than previous generations of Chinese ever had.

Until recently Anna worked crazy, long hours selling software. During that time, she ate out for every meal and never cooked her own food. She says as she was eating all the oily and salty food in the restaurants, she felt like the city was swallowing her.

So she read modern books about nutrition and forced herself to try strange new vegetables. Now she cooks them at home. She also features recipes on her website with ingredients like the broccoli at the market.

In many ways, figuring out how to stay slim and healthy in modern China is a bit like the struggle Chinese face in other parts of life. It's how to decide what to keep from the past, and what to take from all the new choices a growing economy offers.