Accessibility links
Feds To Rein In Use Of Some Antibiotics On Animals : The Salt When livestock producers overuse antibiotics, the drugs can help breed resistant bacteria, or superbugs, that have infected tens of thousands of people. The FDA wants to stop that, but its announcement today only restricts one class of drugs out of the many used on animals.

Feds To Rein In Use Of Some Antibiotics On Animals

Feds To Rein In Use Of Some Antibiotics On Animals 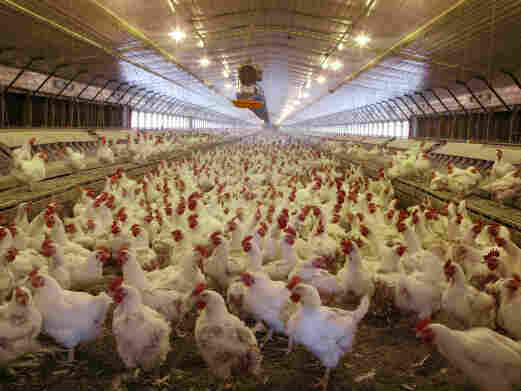 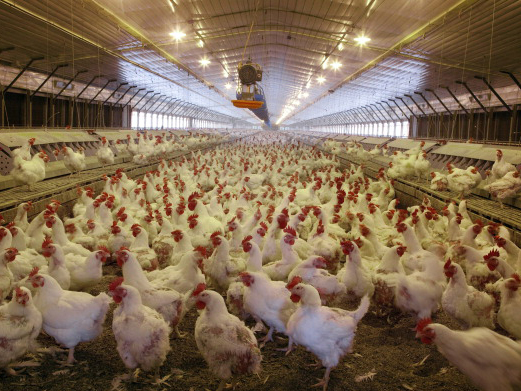 Chickens in a mechanized hatchery, in Monroe County, Alabama.

The Food and Drug Administration is moving to stop the use of some antibiotics on animals. The agency wants to prevent overuse of these drugs so that bacteria don't develop resistance to them.

Cephalosporins are especially useful for children with infections; unlike other antibiotics, like fluoroquinolones and tetracyclines, there aren't any restrictions for for pediatric use of cephalosporins. They also are important for treating bacterial meningitis and bone, urinary tract, and upper respiratory system infections.

But veterinarians use them, too. They treat dairy cattle that are sick with Salmonella. And in the poultry industry, broiler and turkey chicks can get injected with these antibiotics before they're even hatched so they won't get sick from E. coli and other poultry diseases later.

Some 80 percent of antibiotic drugs in the United States were sold for use in food animals, according to an analysis of FDA data by a researcher at the Johns Hopkins School of Public Health. Many of those are used to help animals grow faster and prevent infections from breaking out on big farms. Today's announcement on cephalosporins doesn't affect those antibiotics in feed.

Still, the more the cephalosporins are used, the greater the chances that they will stop working because bacteria can become resistant to them.

That has long been a concern of many public health experts, including the Pew Health Group. Pew said in a press release today that while "the FDA has approved cephalosporins to treat some infections in food animals, the drugs often are administered in ways not specifically approved by the agency."

This "extralabel" use of antibiotics by livestock producers is linked to the emergence of resistant bacteria, or superbugs, that have infected tens of thousands of people, according to David Wallinga, a physician at the Institute for Agriculture and Trade Policy and a member of the Keep Antibiotics Working coalition.

Today, the FDA said the drugs remain critically important for humans, so their use should be restricted only to humans.

The decision to restrict the cephalosporins comes just two weeks after the FDA announced it was trashing a 1977 proposal to remove approvals for two antibiotics, penicillins and tetracyclines, used in livestock and poultry feed.

An association of veterinarians says the new rule on cephalosporins won't have a big impact. They can still use these other antibiotics to keep animals healthy.

The new rules will take effect in April.