Accessibility links
How The Russians Saved America's Sunflower : The Salt It's one of the few food crops that actually originated in North America. But the sunflower was just a pretty diversion until Soviet breeders came up with oil-rich varieties that became a staple. 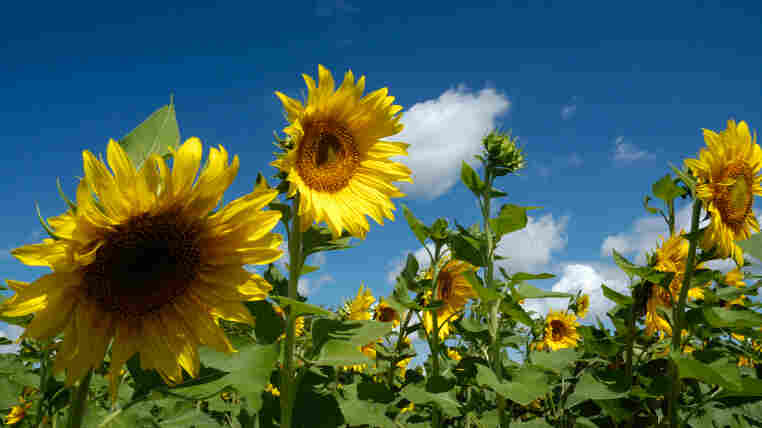 A field of sunflowers in Russia. iStockphoto.com hide caption 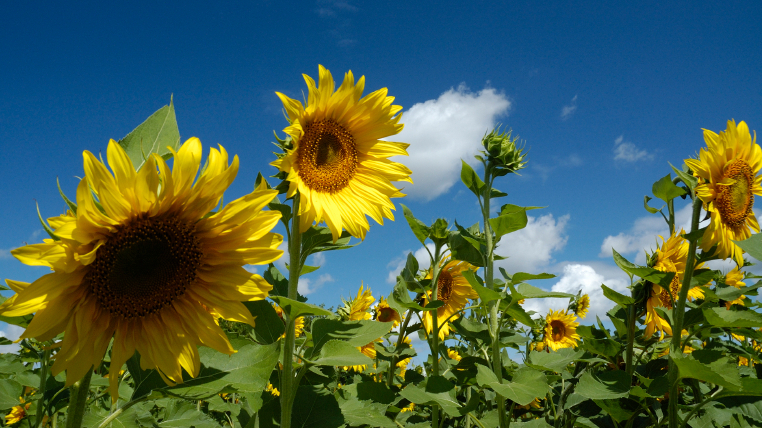 A field of sunflowers in Russia.

Next time you buy some potato chips, take a look at the list of ingredients. There's a good chance that, right after potatoes, you'll see this: "Sunflower oil."

You might think nothing of it. After all, the sunflower is the state flower of Kansas. Why wouldn't the potato chip industry use this home-grown oil?

But before the sunflower ended up helping to fry potatoes, it had to take a long detour through, of all places, the Soviet Union.

The sunflower is, indeed, a home-grown plant. It's one of the very few food crops that actually originated in the territory of the current United States. (Along with blueberries, squash, and pecans. Can you name any others? Don't count corn, which came to us from Central America.)

"I always call the sunflower one of our native sons. We are the center of origin of this crop," says Gerald Seiler, a botanist who works at the U.S. Department of Agriculture's Sunflower Research Unit in Fargo, N.D.

Before Columbus ever arrived here, native Americans selected from among the dozens of wild sunflowers that grow here. They developed tall plants with a single large head, and seeds they could eat.

After that, though, the sunflower found itself neglected. This native son had to go abroad to find love and respect.

Finally, the Russians adopted it. They turned this native American plant into one of the world's great sources of cooking oil.

Why Russia? Jerry Miller, who was a sunflower breeder at the Sunflower Research Unit in Fargo until he retired a few years ago, says it was partly religion. The Russian Orthodox Church had a list of foods that you weren't supposed to eat during Lent. That included butter and lard.

"But it just happened that sunflower was such a new crop that it was not on the prohibited list," he says. "And when they discovered that they could use sunflower, it just blossomed."

By the 1800s, sunflowers covered huge fields in Russia and Ukraine. 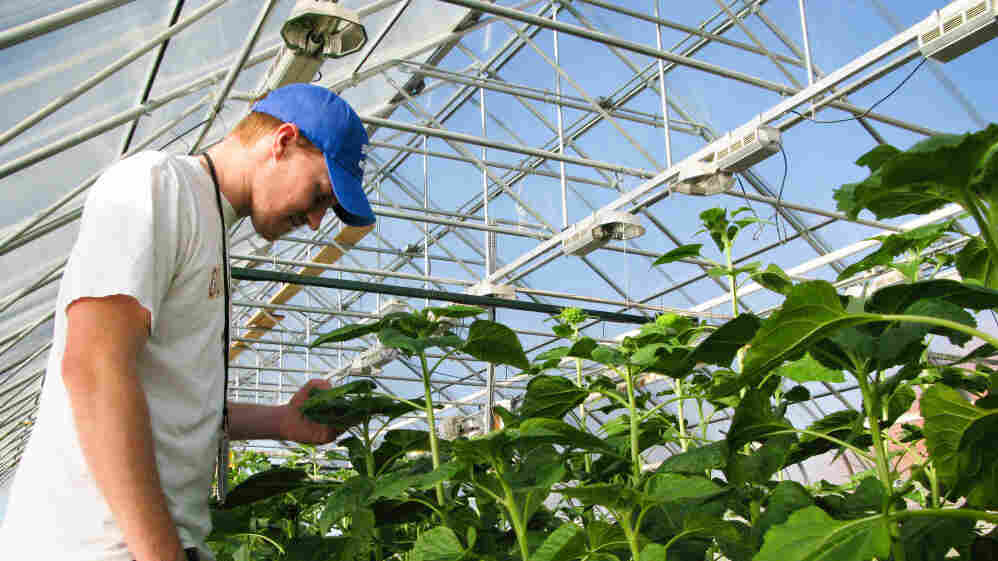 Then, during the Stalin era, Soviet plant breeders made these little oil factories even more productive. They created varieties with almost 50 percent more oil in their seeds.

But in the U.S., sunflower oil couldn't compete with oil from corn and soybeans, because those oils are cheaper.

Then came the 1990s, and sunflowers got a boost from somewhere they never expected: Potato chip makers.

"It all started with what was called the Mediterranean diet," says Jerry Miller.

Olive oil was in. Transfats were on their way out. And companies like Frito-Lay were wondering how they would fry their potato chips if people didn't want to eat transfat-filled partially hydrogenated soybean oil.

Miller had an answer. He told the companies that Soviet plant breeders had created a mutant sunflower, one that produced oil that was still good for you, but didn't go bad while frying potato chips. It had much higher levels of monounsaturated oleic fatty acids, and much lower levels of polyunsaturated fats. So, no transfats!

"Frito-Lay had a chemist named Monoj Gupta, who recognized immediately what it could do for his company. And he said, 'Let's go. Let's do this,'" recalls Miller.

Today, farmers in the United States grow almost exclusively this new kind of sunflower, and the potato chip industry can't get enough of the oil.

For an encore, the sunflower may be going where no oil seed has gone before. Right now, in the greenhouses of the USDA's sunflower research center in Fargo, Brent Hulke is growing sunflowers with yet another genetic trait. These plants may eventually produce oil that's lower in saturated fat than any other vegetable oil. 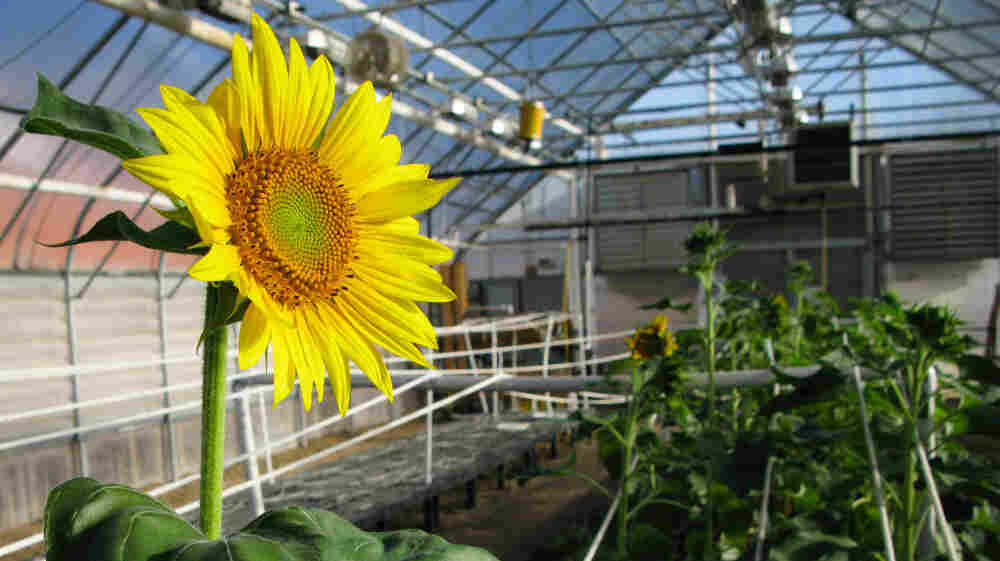 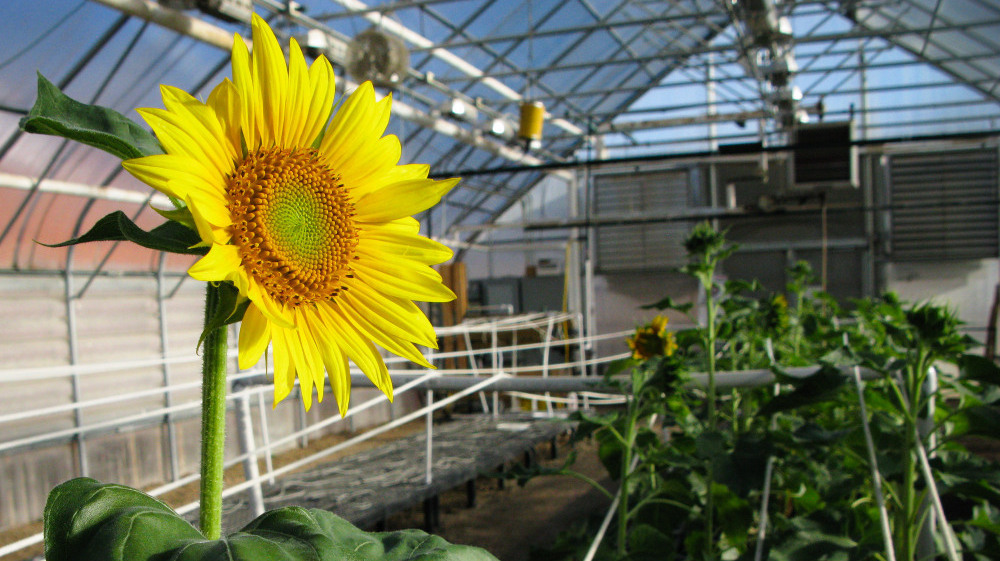 The genes for these low levels of saturated fat came from sunflowers that were collected in Hungary and Egypt.

"It's just so fascinating that something like that can exist on the landscape and you just don't even know it," says Hulke.

Which brings us back to the USDA's Gerald Seiler - the scientist who calls the sunflower America's native son.

He's pretty sure there are more genetic treasures still to be discovered in cultivated sunflowers all over the world and in the extended family of the sunflower's wild relatives, which grow from Texas to Canada.

For the past 40 years, Seiler has been driving country roads, stopping to gather sunflower seeds.

He deposits the seeds in storage vaults, including one at his research center in Fargo.

In this refrigerated room, he shows me row after row of metal and plastic boxes. Each one holds hundreds of seed samples. A lot of these boxes have the name Seiler on them. "This is my life in here! This is 30-some years of work in here!" he says.

Each seed is a package of genes that Seiler wants to preserve. Because those genes, he says, are like nuggets of gold. Their true value is still waiting to be discovered.