Accessibility links
Mystery Solved: Why The Cat Craves Mushrooms (And People Do, Too) : The Salt Why would a cat crave mushrooms? A scientist says it's the umami. Though cats can't taste sweetness like people can, they are aces at sniffing out the amino acids that signal protein-rich foods.

Mystery Solved: Why The Cat Craves Mushrooms (And People Do, Too)

Mystery Solved: Why The Cat Craves Mushrooms (And People Do, Too) 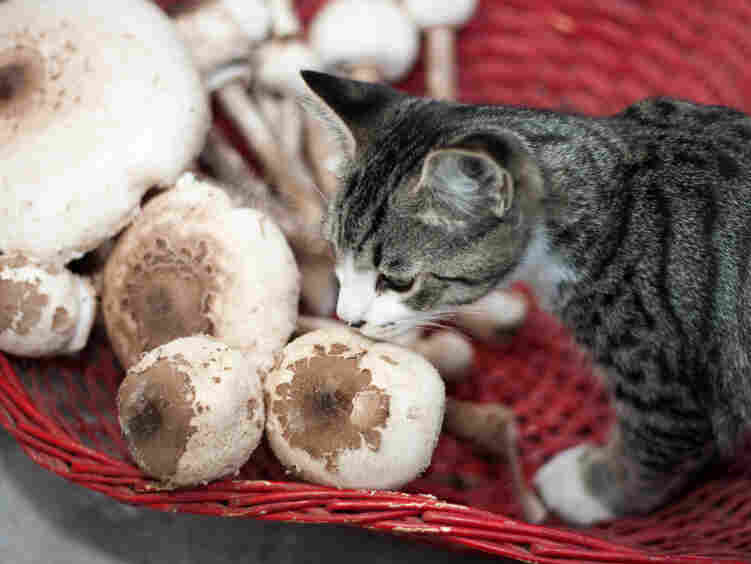 Why do cats have an affinity for mushrooms? Marco Varrone/iStockphoto.com hide caption 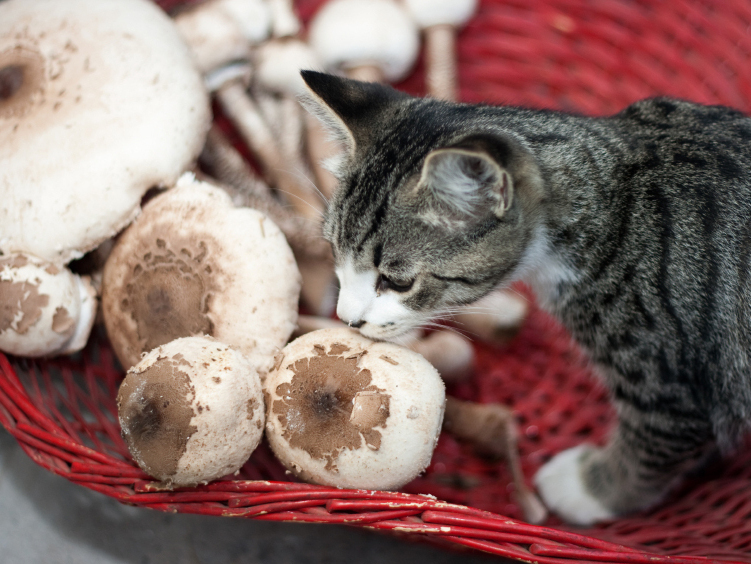 Why do cats have an affinity for mushrooms?

Anyone who lives with a cat knows that fruits and vegetables do not top the feline food chart. So it's a surprise to hear that some cats do crave mushrooms.

This tale starts with Ellen Jacobson, an amateur mushroom hunter in Colorado. As she was cooking up a bolete mushroom, her cat Cashew started brushing against her legs. She put some of the mushrooms in a bowl, and Cashew gobbled them up. "He didn't like them raw," she told The Salt. "He only liked them cooked."

She was puzzled as to why a meat-loving cat would love fungi. But she soon found that other peoples' cats wanted mushrooms, too.

That oddity is a clue to how the taste preferences of humans and animals evolved, based on the foods we need to survive.

Mushrooms have a lot of glutamate, an amino acid that gives them their rich, savory flavor. Glutamate is one of the chemicals responsible for the umami flavor; it's one of the five flavors sensed by humans, along with salty, sweet, sour, and bitter. (Check out Robert Krulwich's engaging piece on the origins of umami here.)

The notion that a cat might crave mushrooms isn't a big surprise to Gary Beauchamp, director of the Monell Chemical Senses Center in Philadelphia. For decades, he has been studying how different species sense flavor. Cats have been a big focus of his research.

In 2005, Beauchamp and his colleagues proved that cats, tigers and other felines can't taste sweetness because they lack a functional gene for sweetness taste receptors. But they do have genes for the receptors that detect the umami flavor of a wide array of amino acids in protein. So Cashew and any other mushroom-craving cats are really on a hunt for protein, not for fungi, he says.

"One experiment nature made was to have certain species that eat nothing but meat," Beauchamp told The Salt. "How that shapes their sensory world can tell us something about how the sensory world of everyone, including humans, is constrained by biology."

It's a good thing that cats don't crave sweets; they aren't physically able to digest carbohydrates.

When Beauchamp's paper was published in 2005, he says, "We got a ton of mail saying, 'Yes, but my cat likes sweets.' " He thinks that those cats are responding to the fat or protein in cake and ice cream, not the sugar. And he thinks humans are probably deluding themselves if they think they can taste more flavors than animals.

Humans are omnivorous and have a wide variety of flavor receptors, which help us identify the many foods that we can digest. Dogs have sweet receptors, too.

But veterinarians say that neither dogs nor cats should eat mushrooms, and the North American Mycological Association warns that both dogs and cats are attracted by the odor of wild mushrooms and can be poisoned as a result.

The Salt cottoned onto this story thanks to Jef Akst, who wrote about Ellen Jacobson and her mushroom-craving cats in the current edition of The Scientist. She had found the story thanks to two researchers who had seen Jacobson's article in a mycological newsletter out in Colorado and written about it in a scientific journal.

So you never know where you're going to find a story that solves a mystery involving felines, fungi and taste.