Accessibility links
How To Get Kids To Eat Apples? Make Them Taste Like Grape Candy : The Salt A Washington apple grower wants kids to eat apples, especially his grape-flavored apples. But why take a perfectly good fruit, with its very own complex flavor and aroma, and douse it with something associated with Dimetapp and lollypops?

How To Get Kids To Eat Apples? Make Them Taste Like Grape Candy

How To Get Kids To Eat Apples? Make Them Taste Like Grape Candy 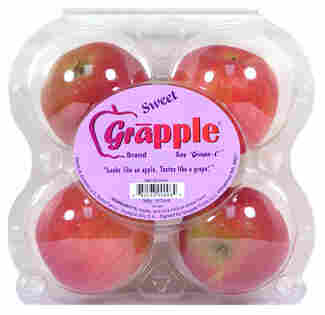 Is the Grapple a healthy snack or just a step away from candy? Grapple hide caption

There is no escaping artificial flavor. It's everywhere, and the people who invent it argue that it will enhance your experience of a food — making it more tropical, more floral, or more bitter, in a good way.

Artificial flavors of familiar favorites also have long tricked kids into eating things they think they don't like. That's part of the idea behind the Grapple (pronounced gray-pull), an apple product sold in grocery stories. The Grapple wears an aromatic disguise, thanks to "a relaxing bath" in natural and artificial Concord grape flavors. That is, it's an apple that tastes like a grape.

"We're trying to increase apple consumption of kids and get a very healthy apple inside them," Grapple co-inventor and Washington state apple grower Todd Snyder tells The Salt. "So we said, back in 2001, how can we make an apple more popular and fun to eat?"

Kids do seem to like grape flavoring — look no further than the grape-flavored dental floss marketed to kids. Snyder claims that he chose the flavor in part because "grape is the number one flavor for kids."

And some might ask, why take a perfectly good fruit, with its very own complex flavor and aroma, and douse it with something associated with Dimetapp and lollipops?

Well, Snyder says, because the people, and especially the kids, want it.

But it's not just the grape flavor. Snyder specifically chose Gala and Fuji apples, the two sweetest apple varieties around, to entice the next generation of apple eaters.

But even though we couldn't find any evidence that most kids prefer grape flavor to apple flavor, one flavor expert we spoke to said she's not surprised some kids do.

The apple with grape flavors "becomes associated with candy and sugar," Marcia Pelchat, a psychologist and associate member of the Monell Chemical Sense Center, tells The Salt. That might be why the heightened scent would be more appealing than plain fruit. "It would seem sweeter to them."

Whatever the reason, Snyder seems to be onto something. In the last two years, he says he managed to sell about 20 million of his gussied up apples, for between $3 and $6 for a 4-pack. They're not so easy to find, though; we discovered you can't buy them in Washington, D.C., proper, only in the distant suburbs, which we couldn't get to during our lunch hour.

And what's up with that "relaxing bath" the website speaks of? Snyder won't divulge much, because it's a patented technology, but he wants to be clear that his apples aren't injected — the flavor seeps in through the fruits' pores. That doesn't produce a soggy apple, he says. Its shelf life is about the same.

These apples kind of reminded us of Y Water, a flavored water line aimed at kids, with such varieties as "immune water," "bone water," muscle water," and "brain water" because of their respective added "functional ingredients to boost performance."

We wondered whether adulterated water and apples are just a way to get parents to spend more on what is essentially cheap and accessible sustenance for kids — plain apples and plain water. Lars Perner, assistant professor of clinical marketing at the University of Southern California, wondered this, too. "There is a possible ethical issue if this encourages low income families to spend a great deal more on this product than what plain natural apples would cost," he wrote us in an email.

Pelchat says, though, she's not sure it's such a bad thing. "Once kids start eating these apples, they're not only going to cognitively see themselves as apple eaters, they're also more likely to try unflavored apples," she says.