Accessibility links
Virtual Victuals: A Gamer Turns Video Game Food Into Real Food : The Salt Mushrooms and cherries first taught gamers what food can do in games. Now, one gamer has taken the food from the virtual world and put it on the dinner plate. 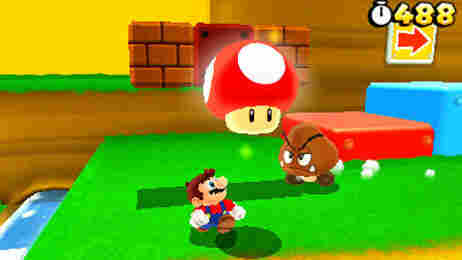 Mushrooms are a staple in the Super Mario Bros. games. Courtesy of Nintendo hide caption

Food can be transformative, especially if you're a character in a video game. When Mario ate mushrooms, Teenage Mutant Ninja Turtles ate pizza and CJ from Grand Theft Auto ate fast food, they became better, stronger, sometimes even bigger.

But now one gamer has made that food even more enticing by putting the virtual food of video games onto her very real dinner table. That's right: Daniella Zelli, a 23-year-old gamer in Edinburgh, Scotland, cooks up dishes inspired by games and shares them on her blog.

"I come from an Italian family, so food is important to my family," Zelli tells The Salt. She started the blog after serving a Sinners Sandwich, inspired by the game Deadly Premonition, to friends gathered for a gaming session. She slapped turkey, strawberry jam and cereal in between two slices of white bread and created a "fantastical mess."

Her friends' positive responses got her thinking about other foods she could create. Now, she alternates between modern and classic game foods and features a new recipe every Wednesday.

One meal that Zelli pulled off is a super spicy curry from the game Kirby's Dream Land. When the perennially hungry — and bulimic — Kirby eats the curry in the game, he starts to flash in color and gains a fire-breathing power.

But nearly a decade before Kirby learned about curry, a more famous character found a snack that could change his appearance and function. The Super Mario Bros. mushroom is possibly the most iconic piece of food in video game history. Red with white polka dots, it gives plumber Mario a longer life, while transforming him into a bigger man.

As veteran gamer Andy Mills, 30, a graduate student in Iowa City, Iowa, puts it, "The whole theme of Super Mario Brothers is strange. You're a plumber, you break blocks and you eat mushrooms." But most kids in the '80s, like Andy and me, accepted the notion that food can make you look better and extend your life.

Before Super Mario appeared in 1985, chowing down was a means to score points. In Pac-Man, the iconic game launched in 1980, cheery yellow circles gobble up pellets and cherries on their way to a win.

But it didn't take long for food to channel a darker side. In Rampage, a King Kong doppelganger plucks people from apartment buildings and puts them on his dinner plate. Poisoned mushrooms pop up in Castlevania. And Super Mario Bros. 2 turns food into a weapon, with Mario chucking root vegetables at his enemies. 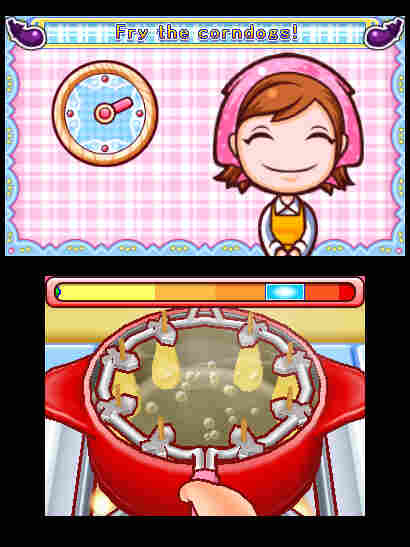 Fry up some corn dogs in the game "Cooking Mama." Courtesy of Majesco Entertainment hide caption 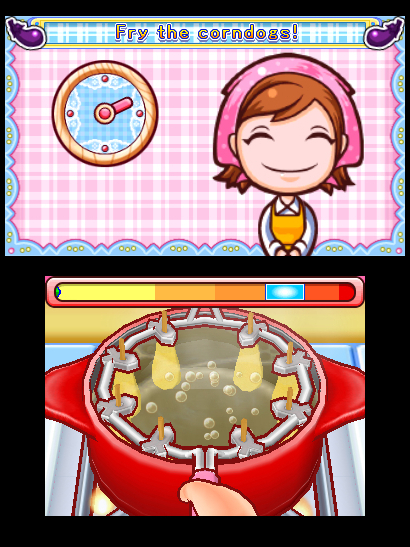 Fry up some corn dogs in the game "Cooking Mama."

As video games have become more realistic, so has their use of food. Gone are hungry yellow dots. In the Fable series, which inspired Zelli to cook an apple pie, characters' weights fluctuate depending on what they eat. And in Fat Princess, a team holding a princess captive feed her cake so it's harder to transport the hefty royal back to home base.

In Skyrim, one of the most popular games today, players can wander into someone's house, take the apples and cheese off the dinner table, and eat them or cook them to make potions.

Mills says these are the kinds of games that let players hone skills in fantasy worlds that will serve them well in real life. "If you don't want to go out and kill dragons, you can stay home and cook recipes to become a better cook." It's clear Zelli has already taken that advice.