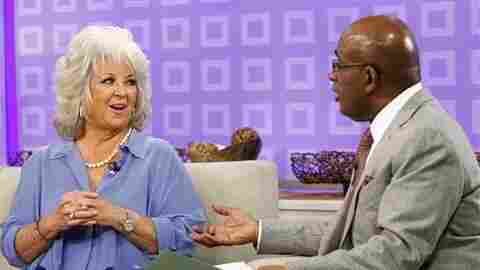 There were hints that all was not well in Paula Deen's Southern-fried world. Last November, when NPR correspondent Allison Aubrey asked Deen if she'd ever do healthier versions of her greasy, sugar-laden fare, Deen said: "As I age, and get older and I get 'different things' that I have to battle physically — it may, you know, resonate closer to home for me."

Now we know that Deen has been battling Type 2 diabetes for three years. She revealed that diagnosis this morning on the Today show and announced that she's now working for diabetes drug manufacturer Novo Nordisk.

If you're thinking this seems odd for the woman who brought the world deep-fried chocolate-covered cheesecake and a doughnut-hamburger-fried egg sandwich, you're not alone.

As one citizen commentator put it on Twitter this morning: "Now that she sells cookbooks, food, AND diabetes meds, the next logical step for #PaulaDeen is to team with over-sized casket manufacturers."

More than one-third of American adults are obese. Obesity is a key risk factor for Type 2 diabetes, which affects more than 20 million adults.

That's not to say that we should never again enjoy Deen's toffee gooey butter cake, made with two sticks of butter. Or that Deen herself has diabetes because of the way she cooks and eats. But from now on it will be very hard to think of Deen's signature culinary excess without also thinking of a life-threatening disease that brings suffering and premature death to millions of people.

Starting today, Deen faces a tough task: urging her legions of fans to reduce their diabetes risk, without torpedoing the indulge-yourself message that has made her rich, famous and beloved. She's trying.

"I've always encouraged moderation," Deen said on Today. "On my show I share with you all these yummy fattening recipes, but I tell people in moderation, in moderation, you can have that piece of pie."

Still, it's hard not to think that many of us hear the pie part, not the moderation. "It's like I told Oprah a few years back," Deen continued. "I'm your cook, not your doctor. You've got to be responsible for yourself."

Perhaps in recognition of the fact that it's hard to sell indulgence and salad on the same plate, Deen has delegated the cooking-healthy franchise to her sons. Bobby Deen's new show, Not My Mama's Meals, started airing this month on the Cooking Channel. It aims to transform Paula Deen's Southern comfort food into "lighter, lean, yet still delicious dishes."

Deen says she's sworn off sweet tea and is now walking on a treadmill. (She sounded not quite sure about the exercise thing when she talked with NPR in November.) So maybe the message will get across. One thing's for sure: Paula Deen's story is no longer about the pleasure of indulgence, but about one of the nation's biggest health problems.