Accessibility links
Geoengineered Food? Climate Fix Could Boost Crop Yields, But With Risks : The Salt Climate simulations show that massive technological interventions, known as "geoengineering," could protect food crops from some of the damaging effects of global warming. But researchers say local effects are hard to predict, so geoengineering may not be worth the risk. 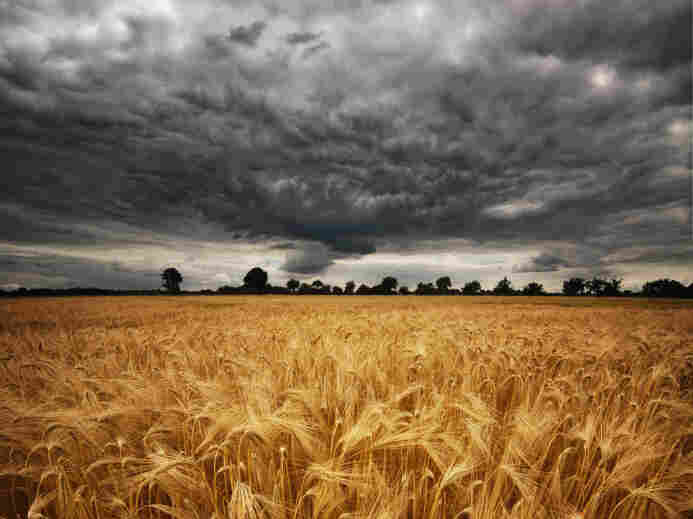 Altering the upper atmosphere could block enough sunlight to offset the warming effects of climate change and protect food crops. But what are the risks? iStockphoto hide caption 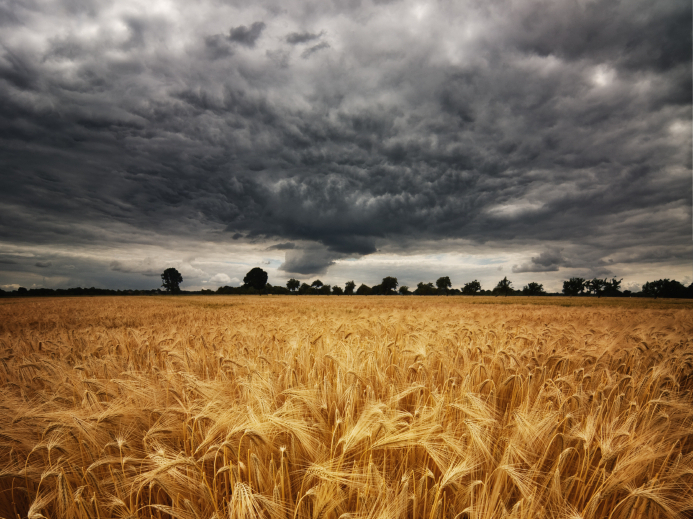 Altering the upper atmosphere could block enough sunlight to offset the warming effects of climate change and protect food crops. But what are the risks?

For a few years now, a handful of scientists have been proposing grandiose technological fixes for the world's climate to combat the effects of global warming — schemes called geoengineering.

Climate change has the potential to wreak all kinds of havoc on the planet, including the food system. Scientists predict that two variables farmers depend on heavily — temperature and precipitation — are already changing and affecting food production in some arid parts of the world where there isn't a lot of room for error. And if the problem worsens on a larger scale, it could do a lot of damage to agricultural yields and food security.

At some point, governments may decide "to do something desperate to protect our food and our people," Ken Caldeira, an environmental scientist at Stanford University, tells The Salt. And that "something desperate" could be geoengineering.

One proposal scientists are batting around is to fill the upper atmosphere with tiny particles that could scatter sunlight before it reaches, and warms, the Earth's surface. Sulfate droplets inside volcanic ash clouds already do this naturally. So the idea is that a few million tons of sulfates, sprayed into the stratosphere by airplanes, could produce the same effect artificially.

Scientists have been messing with local weather for decades. China does it all the time, most infamously during the 2008 Olympics. But around 2006, the notion of doing it on a global scale got more traction, especially when Nobel laureate Paul Crutzen got behind it. A backlash ensued, as many pointed out that tampering with such a complex system was far too risky.

Caldeira began studying geoengineering with the intent of proving that it's a bad idea. But his new research suggests that manipulating the climate could actually produce benefits, at least for food production. For instance: a study from his lab, published Sunday in Nature Climate Change, compares the effect on the global food supply of unmitigated global warming versus geoengineering.

The result? Crop yields of wheat, rice and corn would actually get a boost from geoengineering.

Julia Pongratz, a post-doc researcher, led the study. She used computer climate models to simulate a doubling of carbon dioxide levels in the atmosphere. Plants like CO2, but the models showed that the resulting temperature increase would lead to an overall decrease in crop yields.

When she added the cooling effects of geoengineering, however, the model showed crop yields increasing as much as 20 percent. Without the stress of higher temperatures, plants would be able to take full advantage of the extra CO2.

So, does this mean we should start geoengineering today?

For one thing, her simulation only studied the average global temperature – not the localized effects of geoengineering. Even if the global average remained the same, some regions might get hotter while others get colder. That could cause drastic local or regional changes in climate and weather patterns.

And both of those problems would threaten local food security, especially in areas where people already have trouble getting enough to eat.

Until researchers learn more about the specific consequences of geoengineering, neither Pongratz nor Caldeira is endorsing the idea.

"Tinkering with planetary-scale processes is a very risky business, and one that I think most people would not want to undertake lightly," Caldeira says. "I think it's the sort of thing that people wouldn't consider unless our backs are against the wall.