Accessibility links
Why McDonald's In France Doesn't Feel Like Fast Food : The Salt France, the land of haute cuisine, is McDonald's second most profitable market. That's partly because the company has figured out that to win over the French, it must encourage people to take their time while eating. 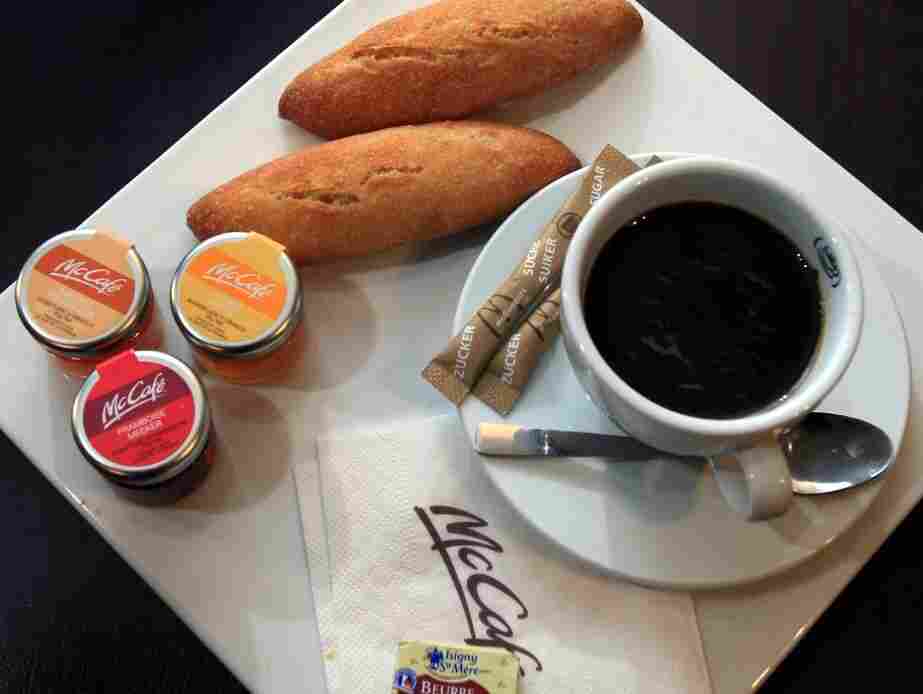 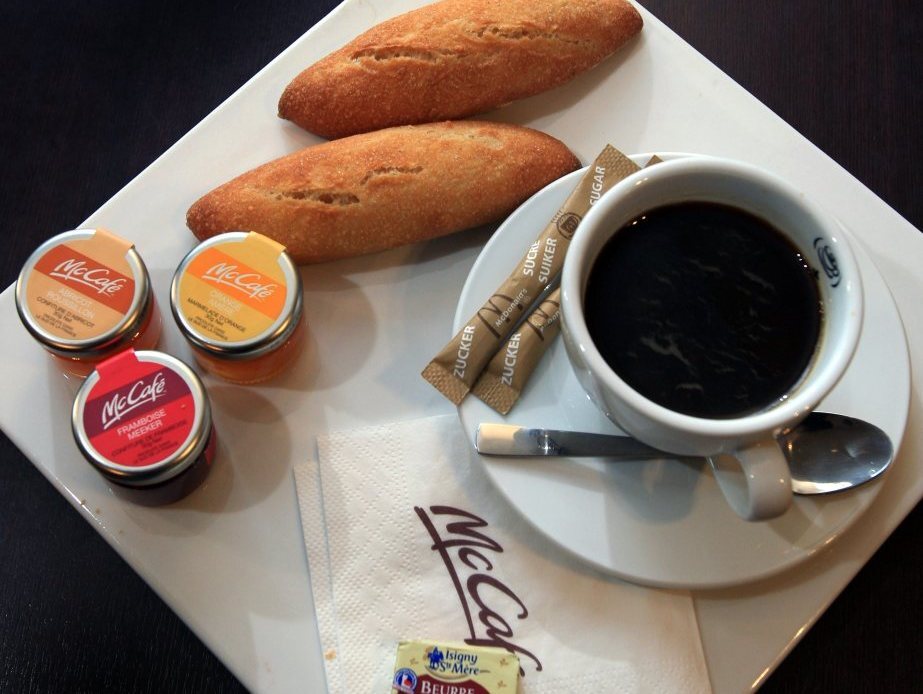 A McDonald's breakfast meal in Villeurbanne, France includes fresh baguettes and jam spreads with coffee for $4.55.

Greetings from McDonald's, or "MacDo," as they call it here in Paris, where I am comfortably ensconced in a McCafé enjoying a croissant and a grand crème coffee. I'm surrounded by people of all ages who are talking with friends, reading, or typing away on their laptops like me.

The beauty of McDonald's in France is that it doesn't feel like a fast food joint, where hordes of people shuffle in and out and tables turn at a fast clip.

McDonalds is the world's largest food chain. It operates in 123 countries around the world, and just this week the company said it plans to open another 1,300 restaurants in 2012.

Naturally, the U.S. is its no. 1 market, but guess who is no. 2? You got it: France. A paper out this month by three graduates of the University of Pennsylvania's Wharton School of Business says McDonald's is such a success in the land of Michelin three-star restaurants because it has adapted to French eating habits and tastes. There are now 1,200 franchises in France; the company opened 30 restaurants per year in the past five years alone.

Even in these harried times, the French spend more than two hours a day at the table. Sitting down to a meal is a cornerstone of French culture, and McDonald's seems to get that. French McDonald's are spacious, tastefully decorated restaurants that encourage people to take their time while eating. And the cozy McCafe's with their plush chairs and sofas have become an extension to many restaurants.

I remember there used to be a few Burger Kings in Paris, but McDonald's closest competitor went belly up years ago. The Wharton study says it's because they tried to transplant the total American dining experience to France, without taking into consideration French preferences.

McDonald's, meanwhile, offers all kinds of Frenchified dishes, from the Alpine burger with three different kinds of cheese to tasty little gallette des rois, or King's Cakes, popular after Christmas and sold by all the bakeries. Last year, it introduced the McBaguette.

Another reason McDonald's works so well here is that the food is locally sourced and very high quality. As we all know, France is the land of haute cuisine. But it's also the land of good cuisine. The French appreciate quality in any category, even fast food. Restaurateurs in France know they'll go bust if they offer substandard products. I've had friends from India tell me that the Indian restaurants in Paris are among the world's best.

And if you like good meat (who doesn't?!), then McDonald's France is clearly superior. In the U.S., McDonald's says its cattle are mostly corn-fed. While the company doesn't address on its site whether growth hormones and growth-promoting antibiotics are added to the animal feed consumed by the animals it buys, it's a reasonable assumption that they are.

French cattle are all grass fed, which many argue makes them tastier. Growth hormones are illegal here and each animal has a passport showing where it was born, raised, and slaughtered, according to McDonald's France. That's called traceability, and we don't yet have such a national system in place.

As for chicken nugget lovers, French chickens, unlike some of their American counterparts, are not rinsed in chlorine to disinfect them. The regular use of chlorine in the U.S. chicken industry is why poulet americain has long been interdit in the European Union.

Of course you can still find French people who dislike McDonald's because it represents American hegemony in a globalized world and the homogenization of food and culture. French anti-globalization activist Jose Bove actually served prison time a couple years back for sacking a McDonald's restaurant in southern France. For a friend of mine who lives in Burgundy — pretty much the French heartland — MacDo is the symbol of malbouffe, or bad food and bad eating — a major slur here. He says he'd never take his two young sons to eat chez Ronald.

But this McDonald's in Paris' 15th arrondissement is brimming with parents who've brought their kids in for lunch. There's a good dose of teenagers too. Like teenyboppers back home, French adolescents, or ados, love to hang out at MacDo — they just gather in the café instead of the parking lot.