Accessibility links
USDA To Require Healthier Meals In Schools With Updated Nutrition Standards : The Salt Less salt and fat. More whole grains, fruit, veggies and low-fat dairy. This is what kids can expect in the school lunchroom soon, according to new standards for school meals announced by the U.S. Department of Agriculture and first lady Michelle Obama. 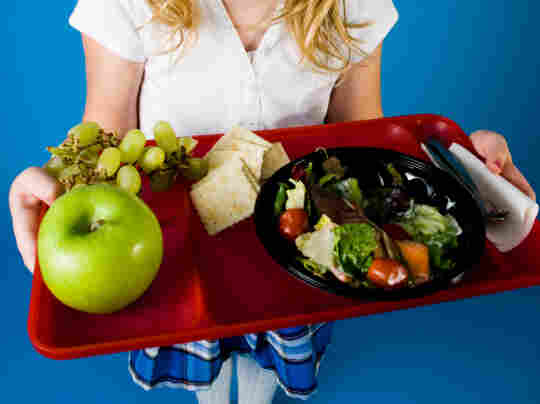 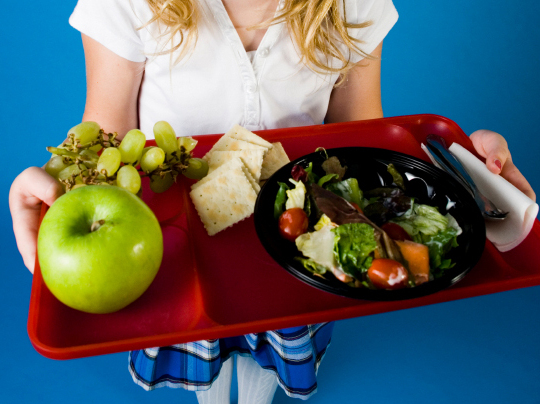 Less salt and fat. More whole grains, fruit, veggies and low-fat dairy. This is what kids can expect in the school lunchroom soon, according to new nutrition standards for school meals announced today by the U.S. Department of Agriculture and first lady Michelle Obama.

"When we send our kids to school, we expect that they won't be eating the kind of fatty, salty, sugary foods that we try to keep them from eating at home," Obama said in a statement. "We want the food they get at school to be the same kind of food we would serve at our own kitchen tables."

And remember all the political shenanigans over pizza as a veggie? Yes, pizza can technically still count as one serving of veggies. But that slice of pizza won't be served alone. The new standards call for two servings of vegetables per meal. So the pizza will come with a side of carrots or green beans.

Chocolate milk made the cut, too, although from here on out it will be skim, according to a sample menu created to show what the new standards will look like once implemented.

"The new school standards are a terrific step forward," Margo Wootan of the Center for Science in the Public Interest told The Salt. "And they would have been even better if Congress had not meddled."

One example: French fries. Originally, the USDA proposed a standard that would have limited servings of the starchy potato. But Wootan explains that the potato lobby found friends in Congress to help scrap that provision. The result: French fries will likely remain a staple of the school cafeteria. But they're likely to be a little less salty.

Another change in store: setting limits on total calories for a meal. While there are still many children at risk of food insecurity or hunger, there's also the competing challenge of obesity. In trying to balance these concerns, the USDA decided to set a calorie range.

For instance, the USDA say elementary school kids should receive lunches between 550 and 650 calories, which is about one-third of daily recommended calories.

The price tag on the changes? $3.2 billion over the next five years, the agency says. But schools will get some help with those costs from the government — included in the package announced today is an increase of 6 cents per meal in reimbursement funds for schools. This is the first increase in reimbursement funds in 30 years.

The first lady used a visit to a school cafeteria in Alexandria, Va., to talk about the new standards. And she also took the opportunity to nudge parents and teachers to be role models for their kids. She says that around her house, when she gets excited about something, her daughters get pumped up, too. And she says, in her experience, kids adapt to change so easily. "That's the beauty," she says.

As she pushed her tray down the lunch line and picked up the turkey tacos served with fresh salsa, brown rice, and whole grain flat bread, she told the kids that she has gotten her family into the habit of eating brown rice. And they all like it.

Parents who attended the first lady's announcement at Parklawn Elementary say the nice thing about the healthy changes is that the school isn't scraping kids' favorite dishes. So for these elementary school kids, school food is cool.

"My son loves the taco," says Ellisa Simmons, mom to a kindergartner. And the switch to lower-fat meat, brown rice and healthier sides isn't a big change.

Simmons says she's pretty sure the school lunch is better than what she can manage to pack in a brown bag.

"We're always so pressed for time," Simmons says, that it would be hard to get two veggies in a packed lunch. And with such healthy options at school, she says she won't even bother packing one.