Accessibility links
Deception Diet: How Optical Illusions Can Trick Your Appetite : The Salt Everything from the size of your plate to the color of your food may be telling you to eat more than you actually need. The good news is you can use psychology to your advantage, if you learn a few tricks of the trade.

Deception Diet: How Optical Illusions Can Trick Your Appetite

Deception Diet: How Optical Illusions Can Trick Your Appetite 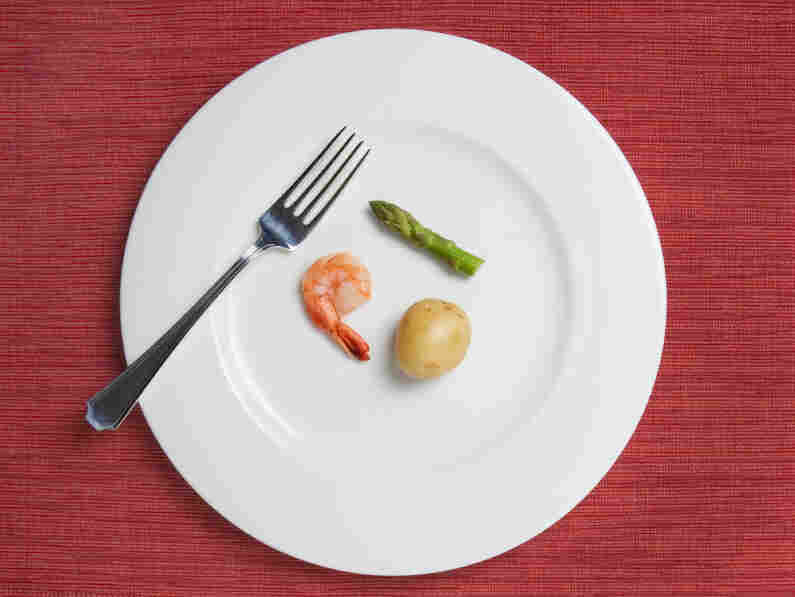 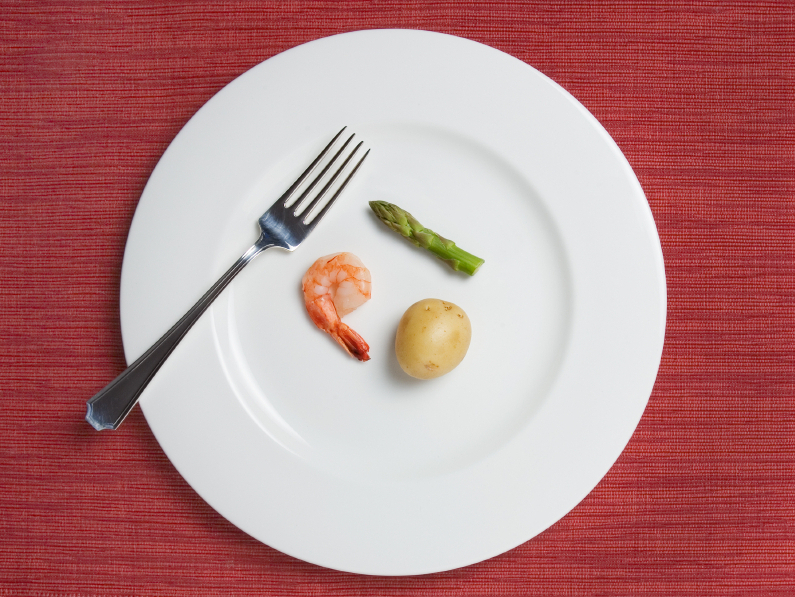 On a smaller plate, this meal would look larger — and feel more filling.

Think you know how to avoid overeating? Think again.

Research suggests that choices, like how much to eat during a meal, are often made subconsciously. Trouble is, our brains are hard-wired to mislead us in lots of little ways, which can have a big impact on our diets.

Take the Delboeuf effect, an optical illusion first documented in 1865. It starts with two dots of equal size. But surround one dot with a large circle and the other dot with a small one, and suddenly the second dot looks bigger. 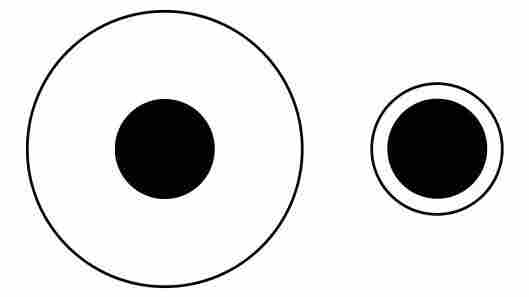 The Delboeuf illusion makes one dot appear larger than the other. But they're the same size. Your brain is misled by comparing the dots to the surrounding circles. Washiucho/Wikimedia Commons hide caption

He and Brian Wansink, director of the Food and Brand Lab at Cornell, performed a series of experiments to measure the effect of the Delboeuf illusion on serving behavior and perceptions of serving size. Their work recently appeared online in the Journal of Consumer Research.

For one experiment, participants were asked to re-create a "target" serving of soup in bowls of various sizes. In another, they had to compare pre-filled bowls to the target serving. Researchers also measured serving behavior in the real-world atmosphere of a buffet line.

As predicted by the illusion, people underserved and overestimated on small dishes, while the reverse was true for large dishes. People using the smallest dishes undershot the target serving by as much as 12 percent. But people using the largest dishes took up to 13 percent more food than they intended.

"We are oftentimes our own worst enemy. And that's not because we want to overeat," Van Ittersum says. The illusion is embedded so deeply in our brains, he says, it is nearly impossible to overcome. Even telling test subjects about it ahead of time, as they did in another phase of the research, didn't eliminate the bias. 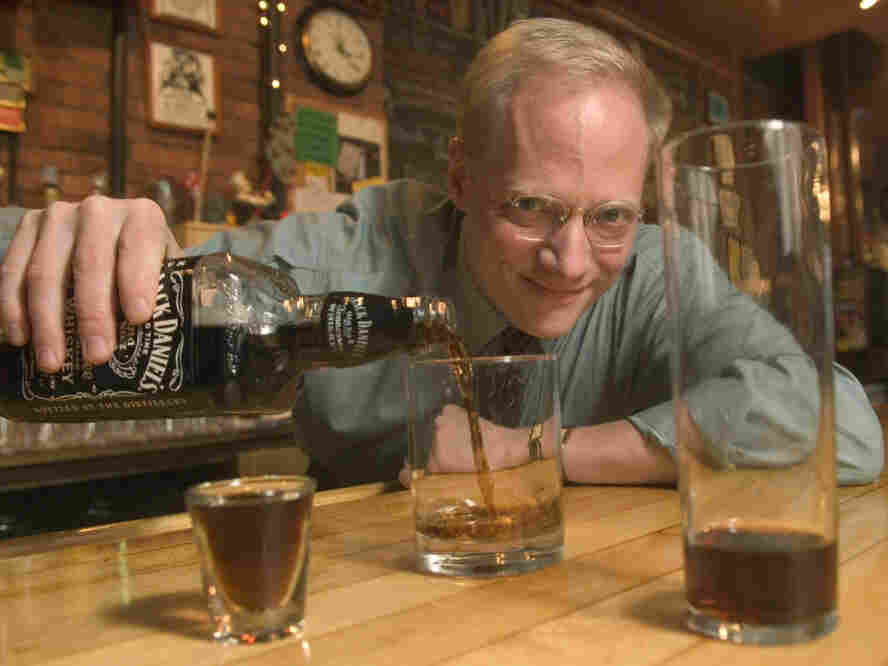 Brian Wansink demonstrates an optical illusion that even fools bartenders. How much should he pour to match the amount in the taller glass? Jason Koski/University Photography/Cornell University hide caption 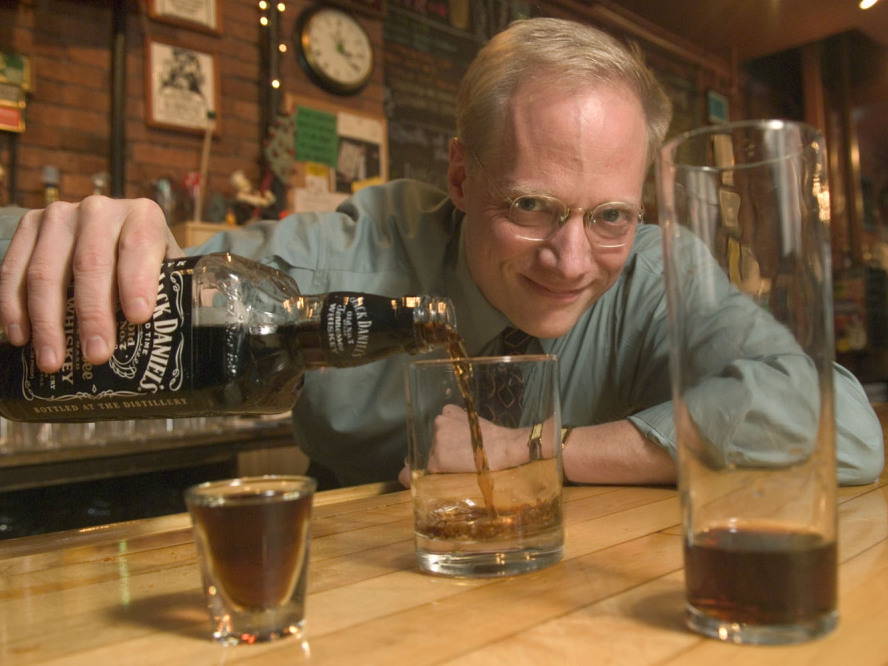 Brian Wansink demonstrates an optical illusion that even fools bartenders. How much should he pour to match the amount in the taller glass?

The Delboeuf illusion is just one of many subconscious biases influencing our food choices. We may not be able to prevent these kinds of effects, but with a little planning, we could turn them to our advantage. The Salt scoured the literature and came up with these suggestions for eating just enough.

Buy smaller dishes. The average size of an American dinner plate has increased almost 23 percent since 1900, according to Wansink and Van Ittersum. They've shown that people using smaller dishes overestimate the size of their servings, even as they serve themselves less food. Contrasting colors between the food and dish, and between the dish and table, enhance the effect. 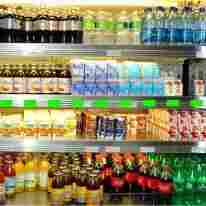 Buy taller glasses. Another optical trick, the T-illusion, which you can try for yourself, affects the serving size of liquids. We tend to overestimate vertical lengths, compared with horizontal lengths. In a previous experiment, Wansink and Van Ittersum asked people to pour equal amounts into a short, wide glass and a tall, skinny one. They found that even professional bartenders poured too much into the short, wide glass — but thought the underfilled tall glass held more.

Put healthy food at eye level in your kitchen. In 2010, the cafeteria at Massachusetts General Hospital adopted a green-yellow-red labeling system to indicate how healthy each food was. A few months later, they rearranged the shelves to place healthier items at eye level. Both changes increased purchases of healthy food.

"We were trying to make the default or the easy choice the one that was healthier," says hospital researcher Anne Thorndike, who led the reorganization.

Color-coding might be overkill at home, but you can rearrange your fridge and cabinets to make healthy foods more visible and accessible, and keep unhealthy foods out of sight.

Use food coloring. Color affects taste, as our sister blog Shots reported last year. We expect red things to be sweet, like ripe fruit. Cut a few calories by replacing some of the sugar in your recipes with red dye, a food psychologist recommends.

Eat with men. In October, The Salt reported that college students of both genders ate fewer calories in the presence of men than with women. Researchers speculate that social gender norms are to blame: Women may try to eat daintily around men, while men may feel less inclined to show off by pigging out if no women are around.

Adopt a mindful eating routine. OK, so this one isn't subconscious. But several experts reminded The Salt that subliminal tricks only go so far. So slow down and pay attention to your food — and your appetite — as an additional defense against overeating.