Accessibility links
Here's A Pie In Your Eye: A Brief History Of Food Fights : The Salt Whether throwing it, dumping it or serving it, protesters have used food to express their discontent with public figures for centuries. The delivery of 500 tacos to a Connecticut mayor's office is just the latest incarnation.

Here's A Pie In Your Eye: A Brief History Of Food Fights

Here's A Pie In Your Eye: A Brief History Of Food Fights 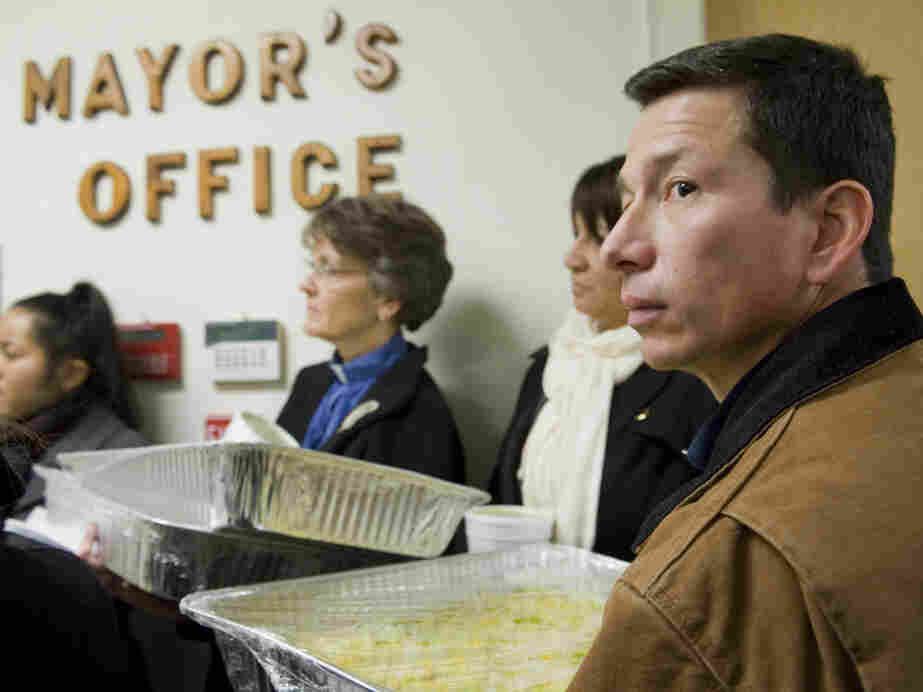 Dixon Jimenez (right), delivers tacos with other activists to Mayor Joseph Maturo Jr. in East Haven, Conn., on Jan. 26. Maturo was not in his office to receive the tacos. Jessica Hill/Associated Press hide caption 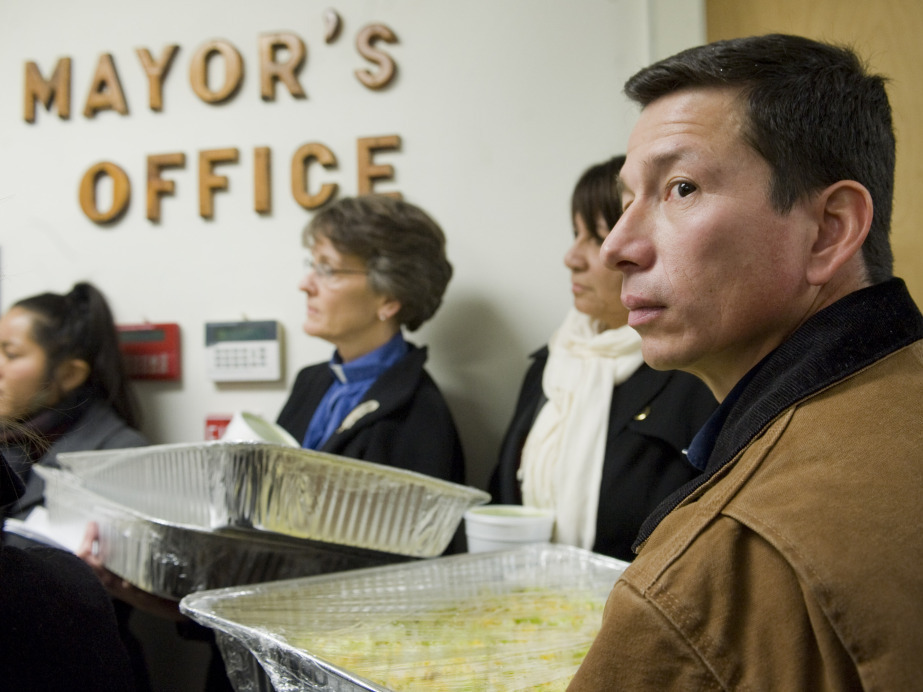 Dixon Jimenez (right), delivers tacos with other activists to Mayor Joseph Maturo Jr. in East Haven, Conn., on Jan. 26. Maturo was not in his office to receive the tacos.

Last week, 500 tacos appeared at the mayor's office in East Haven, Conn. But they weren't intended for a casual luncheon.

Instead, this truckload of tacos was meant to be a symbol of discontent. An immigration reform group sent the fare in protest to what they said was an insensitive comment from Mayor Joseph Maturo in reference to Latinos and tacos.

The Connecticut activists join a long line of protesters who've resorted to food in the name of public humiliation. Perhaps the most famous act was the disposal of 342 chests of tea into the Boston Harbor in protest of taxation without representation.

More recently, disconcerted citizens have made bold statements with cream-laden pies. Dozens of politicians, including Jim Rhodes and Willie Brown, have fallen victim to pieing. Even in the safety of a courtroom, Rupert Murdoch couldn't escape the pie-wielding partisans. 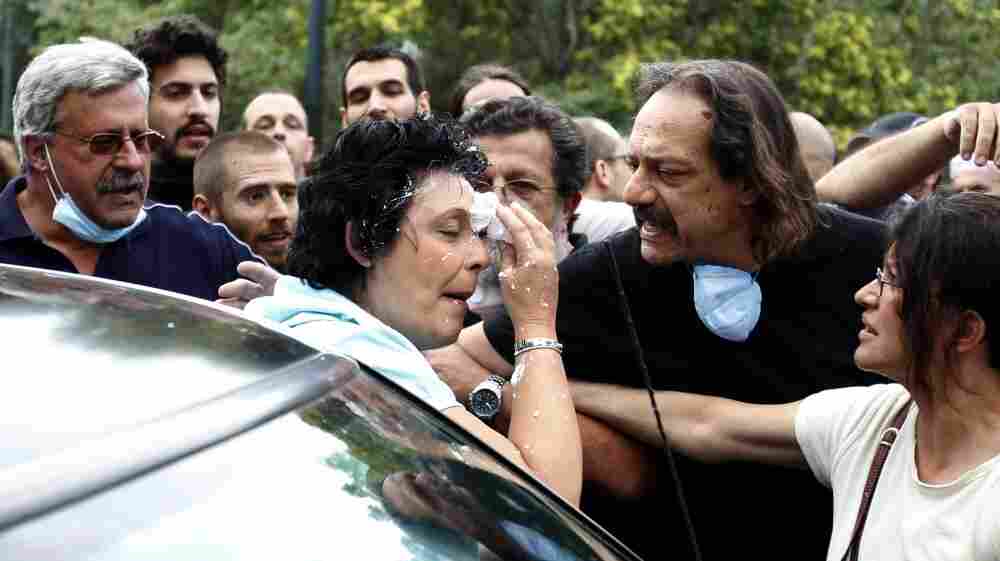 Communist party lawmaker Liana Kanelli enters her car after protesters threw yogurt on her face as she tried to reach the Greek parliament during a 48-hour general strike in Athens in 2011. STR/AFP/Getty Images hide caption 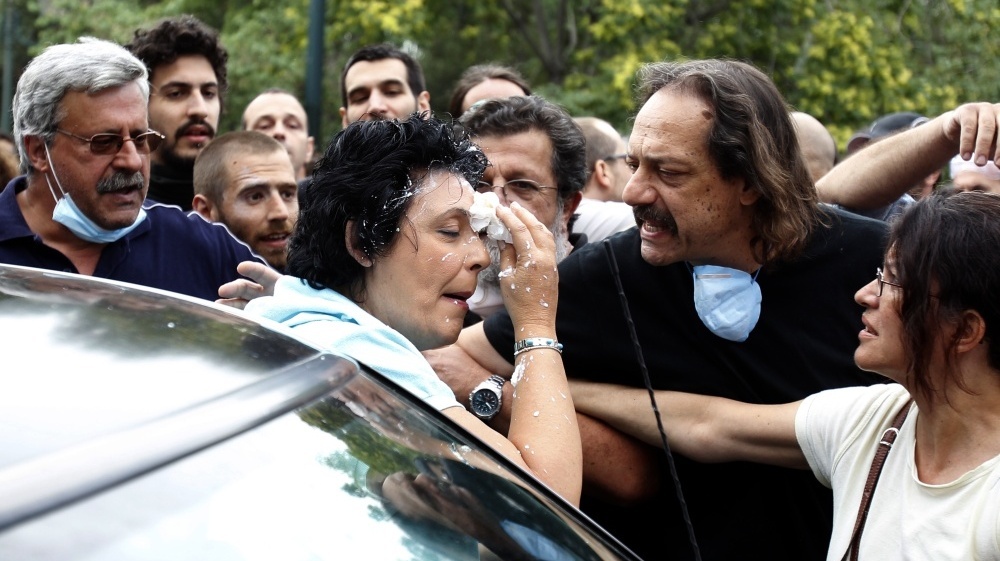 Communist party lawmaker Liana Kanelli enters her car after protesters threw yogurt on her face as she tried to reach the Greek parliament during a 48-hour general strike in Athens in 2011.

But why pies? The slapstick humor of pieing has origins deeply rooted in silent films from the early 1900s when physical comedy was necessary. In a 1998 KRON interview, an anonymous member of the Biotic Baking Brigade group – a left-wing group responsible for the pieings of Brown, Gavin Newsom and others – said, "It allows people to have a laugh at the expense of rich and powerful and otherwise unaccountable figures."

Some activists have grabbed eggs as ammunition — perhaps because they had no time to cook a pie or because they were channeling their inner 11-year-olds — and chucked them at public figures, including Arnold Schwarzenegger and David Blaine. Egging seems to be a much more aggressive tactic for protesters because it can actually cause damage. Indeed, a 2006 study on egging injuries in the Emergency Medicine Journal suggested a public health message was warranted.

Hurling food isn't just an American thing, either. The Greeks have been known to launch yogurt at figures they don't like – an activity called yaourtoma, or yogurting. Last year in Athens, protesters threw yogurt at police trying to break up a rowdy rally outside of parliament.

Leonidas Vournelis, an anthropology graduate student at Southern Illinois University who was doing research in Greece, wrote in a column that it isn't uncommon to see demonstrators walking around in marches with bags of yogurt cups armed at the ready.

The Greek protesters even use a specific type of yogurt made from sheep's milk because of its association with the countryside – quite different from FAGE, which is produced on an international scale, Vournelis says. The idea is to disrespect and shame the targets by covering them with "Greekness" and remind them of their identity, he says.

Back in Connecticut, it's probably safe to say that Maturo is happy he was tacoed — and not pied, egged or yogurted. After the demonstration, the tacos were delivered to a local soup kitchen. Maturo has issued an apology for his quip.