Accessibility links
Lamb Boom Has Sheep Farmers Flocking Together : The Salt Lamb prices are at an all-time high, but American sheep farmers are worried. They say they need more farmers to raise sheep. And they want existing sheep farmers to increase the size of their flocks to meet growing demand. 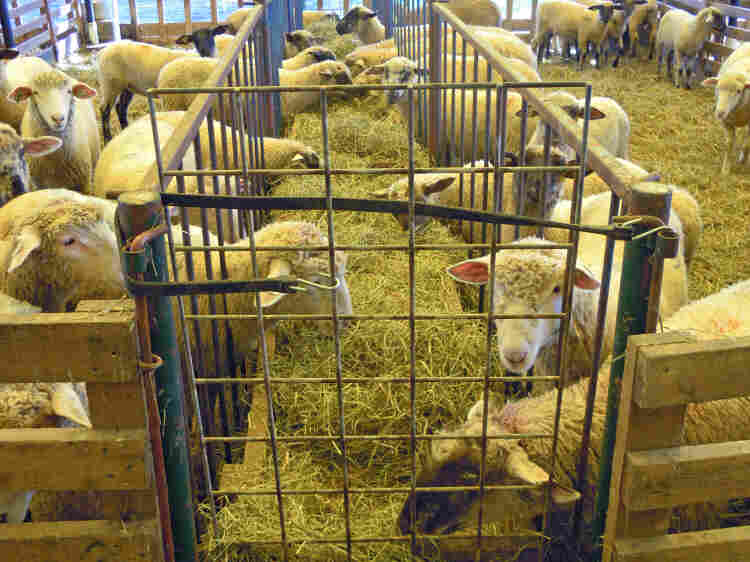 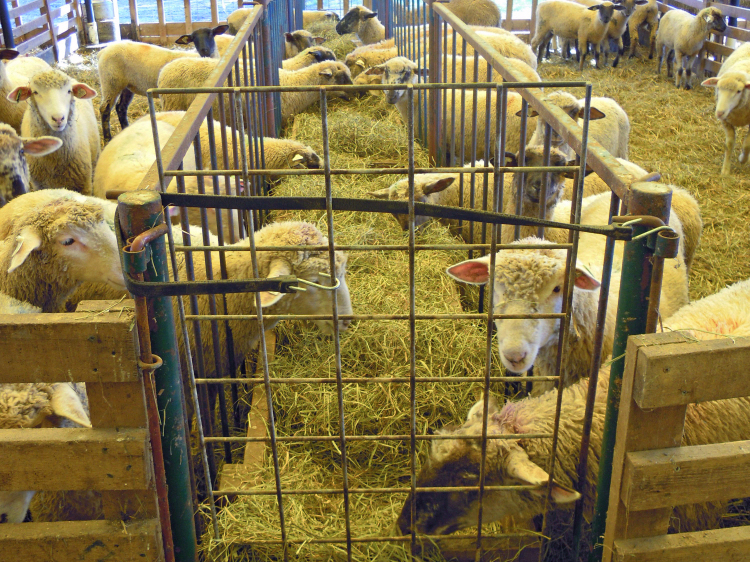 A holding pen for lambs at the Will-O-Wood Farm in southeastern Ohio.

When city folk think of lamb, they may think of very young sheep — perhaps 6 weeks old. But 6 months is the average age of spring lamb going to market these days.

Don Van Nostran has one in a holding pen in his barn at Will-O-Wood Farm in southeastern Ohio. It soon will be butchered and sold in a local Kroger store.

Van Nostran's spring lamb is very much in demand these days as an alternative to beef, chicken and pork, even though the cost is generally higher. Many immigrants from Africa and the Middle East, especially Muslims, favor lamb or goat over beef.

But even though the popularity of lamb is up, American sheep farmers like Van Nostran are worried. They say they need more farmers to raise sheep. And they want existing sheep farmers to increase the size of their flocks to meet growing demand.

That's surprising, because lamb farmers are making good money, with prices at an all-time high. Van Nostran says chops can go for about $15 a pound. Compare that to some chicken cuts in the $2 range and beef at about $5 a pound.

Still, the future of the industry is uncertain.

Curt Cline is another southeast Ohio sheep farmer who worries about producing enough.

"There needs to be a certain level of numbers of head of sheep to support infrastructure," Cline says, referring to infrastructure like processing plants and veterinary support. "If the infrastructure falls apart, you're kind of left hanging."

But he doesn't actually view other lamb producers as competition; he says he sees them as partners.

The American Sheep Industry Association is calling on existing sheep producers to expand and on new farmers to start production. This national initiative, launched last year, aims to get farmers to produce 315,000 additional lambs by 2014.

Both Cline and Van Nostran have signed on to be part of that effort.

Van Nostran says there's a lot of room for growth in the East and the Midwest, but not so much out West, where ranchers don't have access to additional grazing land.

Many of the new farmers are young, and agriculture officials agree that sheep raising should be attractive to them because it's relatively low-cost compared with other herds.

Sheep need fewer acres for grazing than cattle, for example, and sheep are significantly cheaper to feed. But they do come with a host of disease issues and, unlike cattle, have a number of predators.

Sheep farming also can be labor intensive, especially when ewes are giving birth. But for today's sheep farmers, this intense labor seems to be paying off.

Fred Kight is a reporter for member station WOUB.