Accessibility links
What Heals The World? Soup, Made By Moms : The Salt The food we cook to nurture the sick is remarkably similar across cultures. When the sniffles hit, we crave gentle foods like chicken soup and gruel.

What Heals The World? Soup, Made By Moms

What Heals The World? Soup, Made By Moms 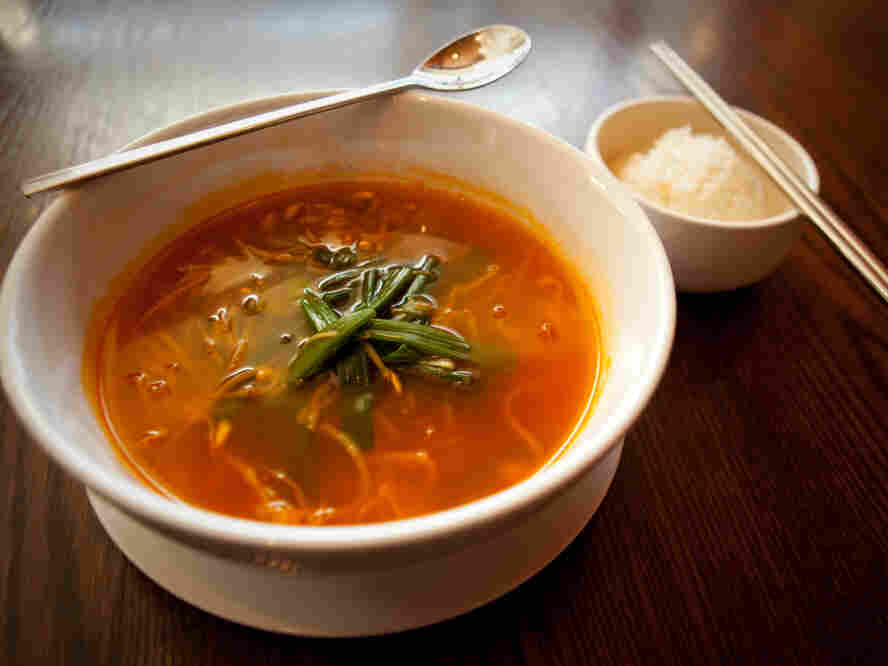 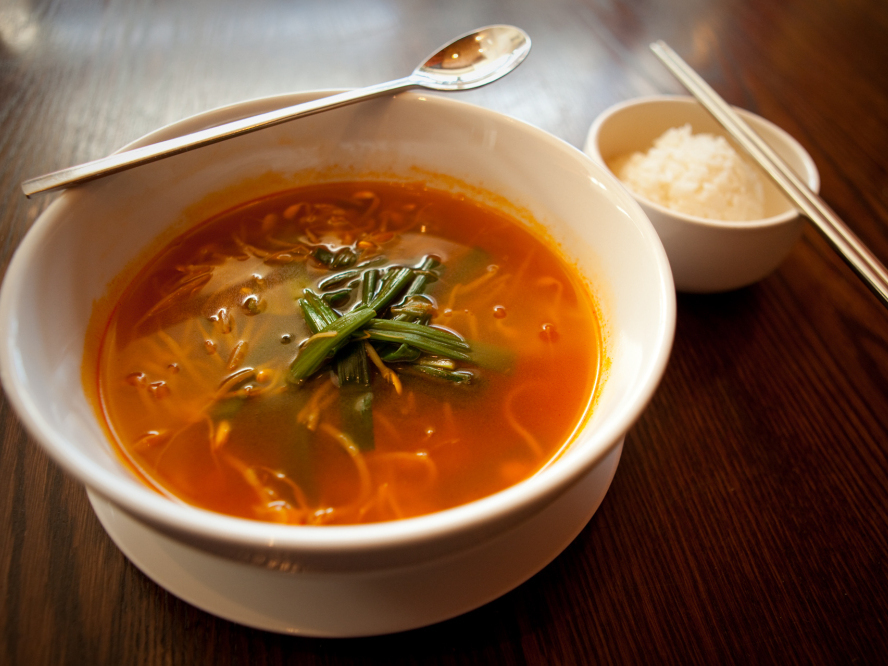 Haechangkuk, a Korean homestyle soup made with beef broth and bean sprouts, is a favorite hangover cure.

Last month I fell ill with a wretched cough. The doctor said I would get better with time, but I craved food that would sustain me on my slow plod back to health. My mom was 3,000 miles away, unable to feed me the chicken soup and Saltines of my youth.

But I found a good substitute: The kimchi soup at a restaurant just around the corner from NPR. Even though this soup has a fiery kick unheard of in the Midwestern fare of my childhood, it was simple, bracing and comforting: just the thing to heal the sick.

Cooking for the sick used to be an essential art of housewifery. The 1896 edition of the Fannie Farmer cookbook devoted a whole chapter to foods to be prepared for the ill. As late as 1945, Irma Rombauer's Joy of Cooking enumerated convalescent cookery, including clear soup with farina balls, oyster stew and wine jelly.

Perhaps antibiotics and Nyquil have made food remedies obsolete. But modern medicine hasn't overcome the need to be coddled and comforted. 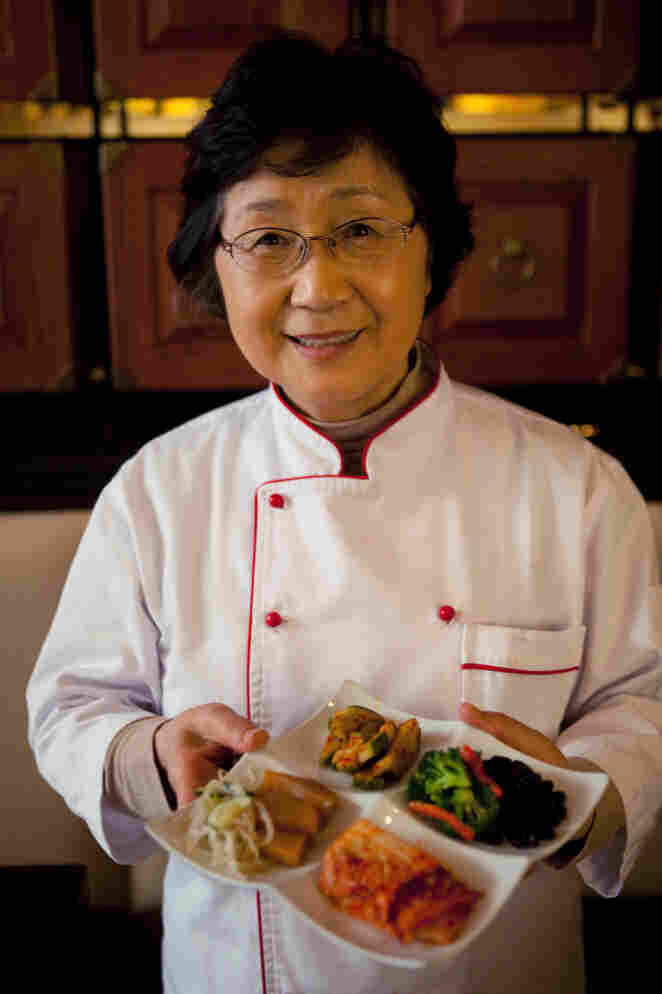 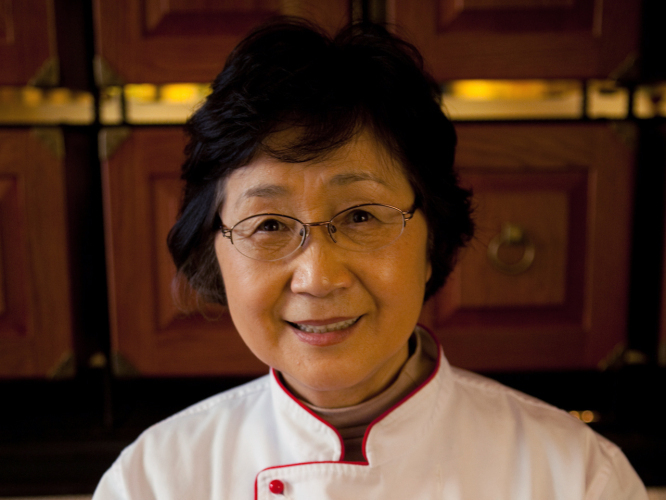 Yesoon Lee makes jook and chicken soup for her children when they're ill.

Maybe that's why the kimchi soup was so welcome; it happened to be made by a mom named Yesoon Lee. This week I went back to Mandu, her restaurant, to ask Lee if I had found the Korean mother's cure-all. What does she feed her kids when they're sick? "Chicken soup and jook," she said.

Jook is the Korean version of gruel, a dish that's on the short list of invalid menus worldwide. "It's for when you have stomach problems," says Lee, who was born in Korea but raised her two children in Vienna, Va. Her daughter Jean, who's 36 and a partner in the restaurant (along with her brother Dan), says: "Still, when I'm sick, my mom makes me jook." She tries to make it herself, but she says, "it's not the same."

The global variations on jook, which include its Chinese cousin congee and variants like the Mexican atole, start as nothing more than a soupy combination of water and grain. Chef Lee adds a hint of salted shrimp paste for flavor.

Chicken soup, Lee says, is for colds. Her soup stars a Cornish hen stuffed with sweet rice, then boiled with garlic, ginger, dried dates, and a touch of ginseng. She serves the hen whole in the broth, so the invalid can scoop out the soft rice inside. "Garlic is very good for your sore throat," Lee says, "and very good for your cold. When you have a fever, I would skip the ginseng," because it's traditionally thought to boost body temperature.

Spices vary when it comes to foods for the sickroom, according to Ken Albala, a professor of history at the University of the Pacific in Stockton, Calif. "In some cultures they're considered medicinal," he says. Western cultures tend to cut the spice, with invalid food emulating baby food. "Usually very bland white food," he says. "It's soft and easy to chew and won't tax the digestive system."

He suspects that the stocks and broths that emerged in the Middle Ages started out as convalescent food. Beef tea, a staple of the British invalid's bed tray, "is just a kind of concentrated broth," Albala says. "The idea was if you precook something in another vessel rather than in your stomach, you get more nutrition."

The 12th century philosopher and physician Maimonides touted the benefits of chicken soup. More contemporary scientists have found mere hints of therapeutic effect, and broth alone has only modest nutritional benefits. When it comes to soup, it's clearly a case of experience trumping what little science there is.

What's remarkable about invalid food, Albala says, is how little it varies across cultures and with time, despite the fact that people's notions of what's good to eat changes radically over the centuries. "It's weird." 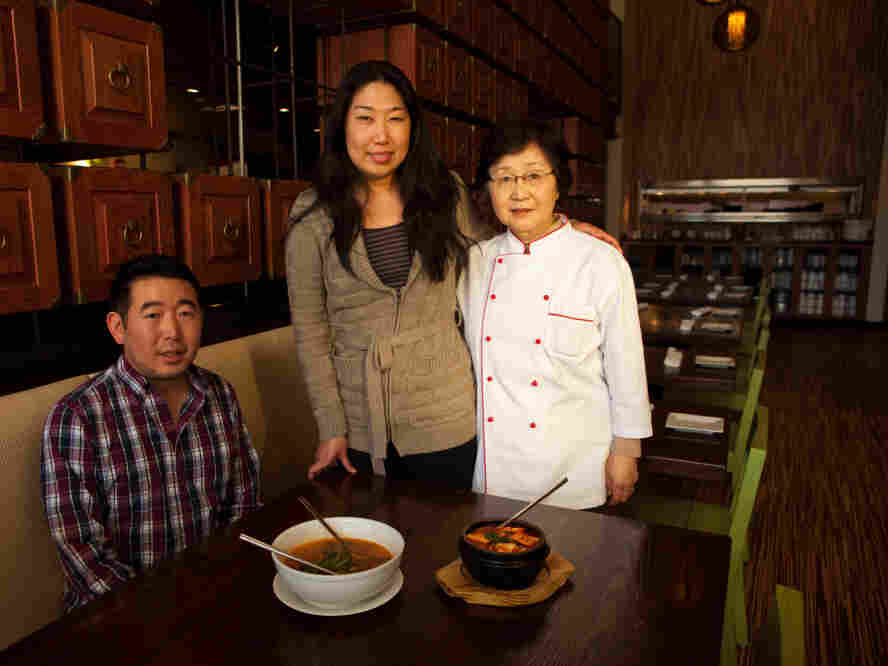 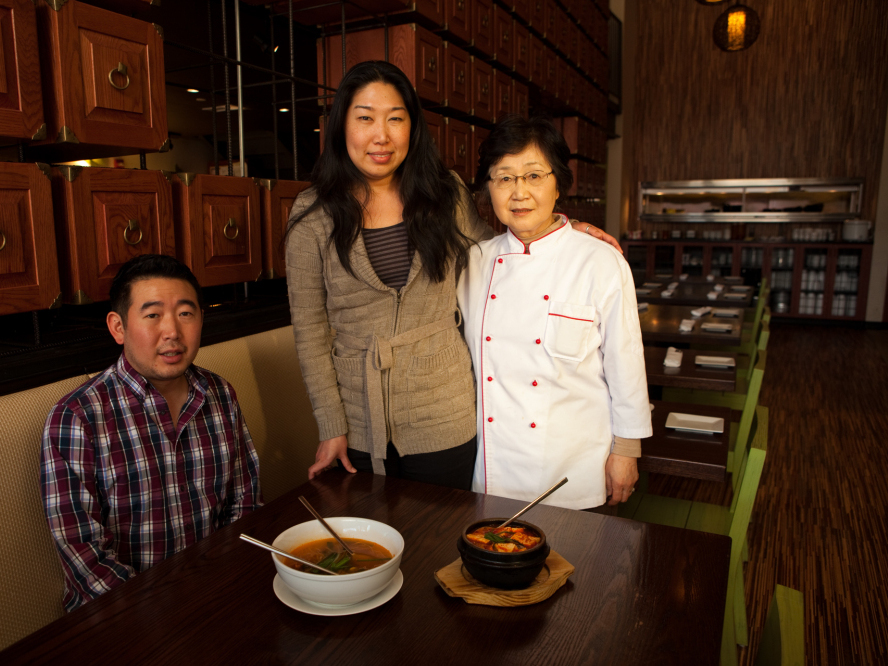 Weird, maybe, or maybe returning to a basic truth of food, and how we use it to care for ourselves. The spicy kimchi soup that warmed me when I was ill may not be traditional; Yesoon Lee says it's more similar to a spicy soup with bean sprouts that's a traditional hangover cure.

She knows that at this time of year, when it's cold and rainy, the thing people order most in the restaurant is chicken soup.