Accessibility links
California's Stevia Growers Bet On Fast Track To Sweetener Success : The Salt The first big fields of stevia ever grown in the U.S. will spout this summer in California's Central Valley. One company is trying to turn this semiwild, zero-calorie plant into an industrial crop at Silicon Valley speed. 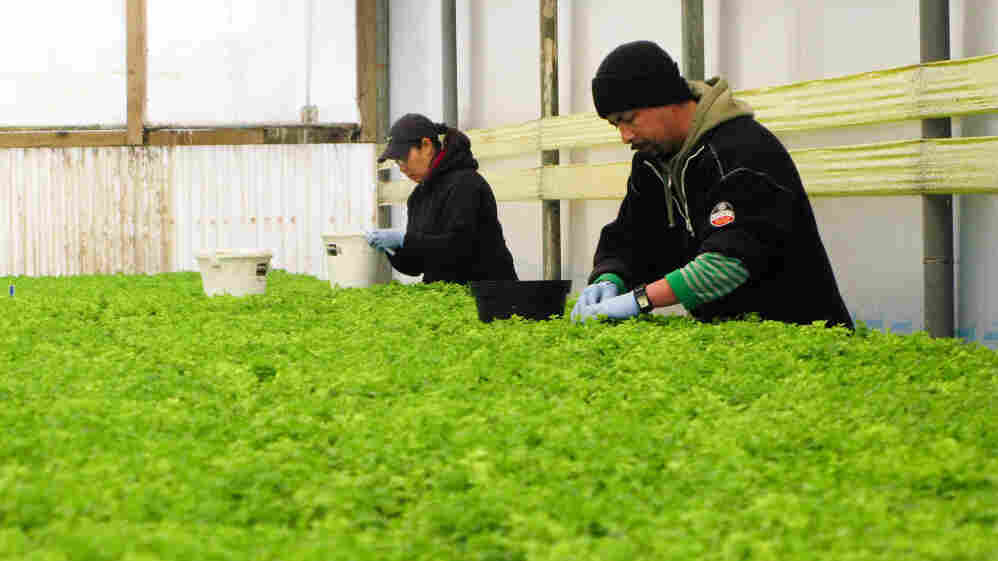 The S&W Seed Co., in Five Points, Calif., will grow these seedlings of zero-calorie stevia in the fields of California's Central Valley. Dan Charles/NPR hide caption

At least that's what food industry newsletters are saying. Regulatory barriers that once blocked many uses of this all-natural sweetener have fallen. The European Union approved the use of stevia in food late last year. In the U.S., the U.S. Food and Drug Administration gave stevia a green light in 2008. Sales are soaring.

Stevia's charm? It's the only zero-calorie sugar substitute with a fresh, clean, green image. It comes from the leaves of the bushy stevia plant, a native of Paraguay. (It still grows wild there.) The other nonsugar sweeteners — saccharin, sucralose, and aspartame — all were born in a laboratory somewhere.

Lots of companies are part of the new stevia gold rush, but S&W Seed Co., in Five Points, Calif., may be the most interesting and entertaining.

"Our feeling is, we can use our advantages in soil, and climate, and weather, to make a natural, clean, good product that people really want right now," says Grover Wickersham, S&W's chairman.

I met Wickersham in The Village Pub in the town of Woodside. It's a Silicon Valley kind of place; a venture capital hangout.

Wickersham has one foot in this big-money part of California. He's a deal-making securities lawyer. But the other foot is firmly planted in the farmland of California's Central Valley. He's the son of a rancher. The main business of the S&W Seed Co. is growing and selling alfalfa seed.

When Wickersham heard about stevia a few years ago, the Silicon Valley side of him recognized its attraction to consumers. "It could be the biggest nonsugar sweetener. That's really big!" he says.

And his Central Valley side was pretty sure that California farmers could grow stevia better, and more profitably, than anyone else.

"California's famous for being able to grow pretty much anything as well or better than any other place in the world," he says, before taking a big bite of burger. "We may not be able to compete with all the things that they make in China, but one area where California does compete, really effectively, is agriculture."

"This is just the beginning of our spring planting. We're making more and more plants," says Koren Sihota, gesturing toward a carpet of green vegetation. Sihota is in charge of S&W's stevia project.

Someone else is visiting the greenhouse today, a bearded man in a floppy hat who has a longer history with stevia than almost anyone else in the United States.

His name is Clint Shock. He's a researcher Oregon State University. But when he first saw stevia, more than 40 years ago, he was working with the Methodist Church among poor farmers who lived along the border between Brazil and Paraguay.

Some of the farmers were growing stevia in their gardens. "They gave me some plants. They also explained where it grew in nature," says Shock.

A few years later, Shock went to those places where stevia grew wild, and picked up a whole truckload of plants. He started a plantation of them. But the business flopped. Shock blames marketing problems.

Now, decades later, he has another chance, working as a consultant for S&W Seeds.

The company is trying to turn this semiwild plant into an industrial crop at Silicon Valley speed. Sihota and his team are figuring out how to plant and harvest it mechanically. They're trying to breed new varieties of stevia, turning the plant into a better biological sweetness factory.

"Ideally, what we would want is very little leaf, with 10 times the sweetness," says Sihota. "One big plant that's got a lot of sweetness and we harvest it once."

It's up to Pure Circle to extract the sweet compounds from these leaves and make something that tastes just like sugar.

As it happens, this is quite a challenge.

Paul Breslin, a psychologist of taste at Rutgers University and the Monell Chemical Senses Center, in Philadelphia, says people don't really think about how sugar tastes — how quickly they sense its sweetness, and how quickly it fades.

"But if you give them something that differs from [sugar], like something that just lingers way too long, they'll notice that immediately, and they'll say, 'That really lingers in my mouth!' "

We rip open two little green packets of it and mix the sweet powder into cups of hot water. Then we take five sips, one right after the other, to see if each sip tastes the same.

The first sip tastes sweet. But by the fifth sip, something funny happens. The sweetness somehow disappears.

It's a phenomenon called adaptation, Breslin says. It doesn't happen much with sugar, but it does with all of the zero-calorie sweeteners, including stevia.

"We found that, as we bring together different steviol glycoside molecules, they start performing better, in many cases, and more like sugar," he says.

Maybe the perfect combination, he adds, is a mixture of stevia and regular sugar.

You'd have some calories, but a lot fewer than if you used only sugar. You'd have the sweetness that people crave. And you could still put these valuable words on the label: "All-natural."