Accessibility links
To Hold The Salt, It's Time To Hold The Bread : The Salt A new analysis from the U.S. Centers for Disease Control and Prevention points to the top ten supersalty culprits in our diets. Some on the list, like bread and pasta dishes, may be surprising. 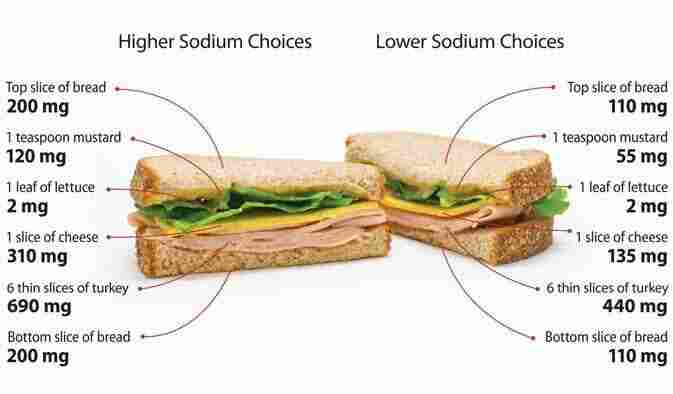 The sandwich on the left has a total of 1,522 milligrams of salt (per whole sandwich), while the other one has only 853 mg. CDC hide caption

It's no secret that some of the tastiest snacks around — potato chips, french fries, and processed deli meats — are terrific vehicles for salt. Without salt, they'd be bland, too starchy, or just plain dull.

But would you guess that the white bread on your turkey sandwich could be delivering almost as much as the turkey — up to 400 mg of sodium, or about one-third of the daily recommended limit for 6 of every 10 adults?

A report out today from the U.S. Centers for Disease Control and Prevention unmasks bread and some other sneaky sodium-heavy foods. It turns out that 10 foods — from bread to poultry to cheese to pasta dishes — are responsible for more than 40 percent of people's sodium intake.

According to the CDC, the average American consumes about 3,300 milligrams of sodium per day, not including any salt that may be added during a meal. That's way more than we need, and puts us at risk for high blood pressure, which can lead to heart disease and stroke.

The U.S. Dietary Guidelines recommend no more than 2,300 mg a day, except if you're over 51 years or African American or have high blood pressure, diabetes or chronic kidney disease. For those groups, the recommendation is 1,500 mg a day.

But it's clearly hard to stay within the limits, especially because we can't control the sodium in some of our foods. Some 65 percent of sodium comes from food sold in stores, and 25 percent comes from restaurants. The salt shaker on the kitchen table isn't really the problem — it's the industrial quantities of saline sodium and crystals that are dumped into processed food to help preserve them and boost their addictiveness.

As public health institutions and other health groups have zeroed in on sodium, sugar and other ingredients in food that can negatively impact health, they're increasingly looking to food companies to make some changes. Some have responded with commitments. Kraft Foods, purveyor of such salty snacks as Velveeta and Ritz crackers, said in 2010 it would reduce sodium by 10 percent over a two-year period. Last year, Walmart also said it would cut the sodium in packaged foods by 25 percent by 2016.

Food companies also need to worry about how much potassium is left in food, as Shots has reported. It turns out that consuming a lot of salt in combination with too little potassium is associated with a greater risk of death, according to researchers from the Centers for Disease Control and Prevention, Emory and Harvard.