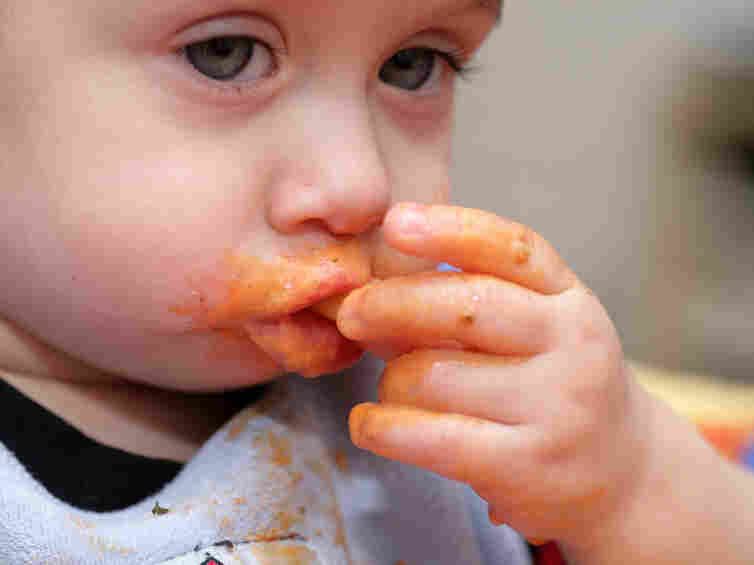 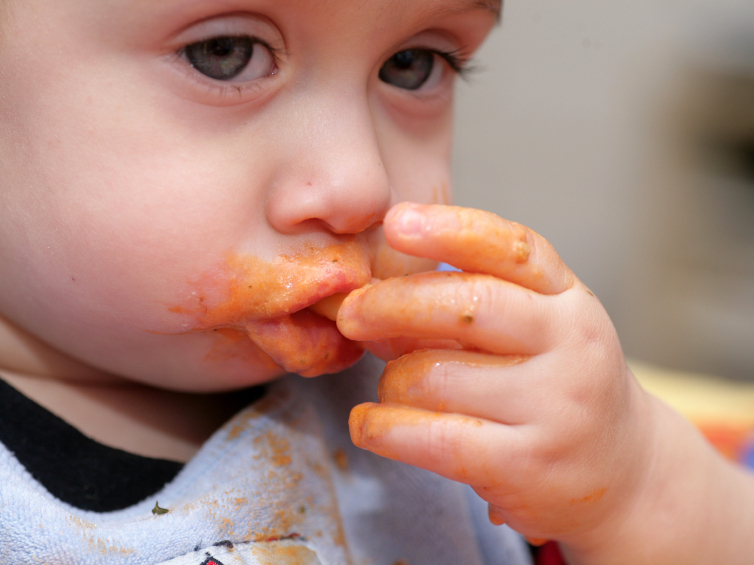 This kid's got the right idea: DIY dinner.

Spooning strained peas into a baby is the traditional way to start solid food. But babies might be better off feeding themselves.

That's the surprising result of a new study that compared the food preferences and weight of babies who fed themselves finger food with those who were spoon-fed.

Both groups of children had equal exposure to snack foods. But the babies who fed themselves preferred carbohydrates like toast, pasta or potatoes, while the spoon-fed children went for sweets when given a choice.

You'd think the children who controlled their own eating would be heavier, but not so. The spoon-fed crew was the one that was more likely to be obese as toddlers. Eight of the 63 spoon-fed children became obese, while none of the 63 self-feeding children were.

"That was interesting," says Ellen Townsend, an associate professor of psychology at the University of Nottingham in England, who led the study. "Maybe with spoon feeding, if you've lovingly prepared a delicious portion, and you might want to get that portion into that child. There may be a temptation to try to get in an extra spoonful or two."

The "self-weaning babies" might like carbs because they're easier to chew and tend to have nice textures, the researchers say. They want to do further research to see if breast-feeding and picky eating play a role.

The study, which was published in the journal BMJ Open, was small, and based on parents' recollections. But Townsend says it should reassure parents that it's OK to let the child take care of food choices, as long as the parents are providing nutritious options like fruits and vegetables, proteins, and iron-rich foods like hard-boiled eggs or strips of meat.

The good news is that most of the children were of a healthy weight, regardless of how they were fed as babies.

As for Townsend, she was holding her 9-month-old daughter when I called her in England today. What's that baby eating for dinner?

"She'll sit down with us tonight and have pork chops, string beans, some baby sweet corn, and probably some potatoes," Townsend says.

Like many parents with more than one child, she doesn't have the time to cook up special baby food. And her children seem perfectly happy to eat what's on the family table.