Accessibility links
Battling The Bottle: Students And Industry Face Off Over Water : The Salt Colleges are pulling bottled water off campuses as students argue the products hurt the environment and aren't well regulated. But the industry fired back this week with a YouTube video it hopes will sway students to keep buying bottles of water.

Battling The Bottle: Students And Industry Face Off Over Water

Battling The Bottle: Students And Industry Face Off Over Water 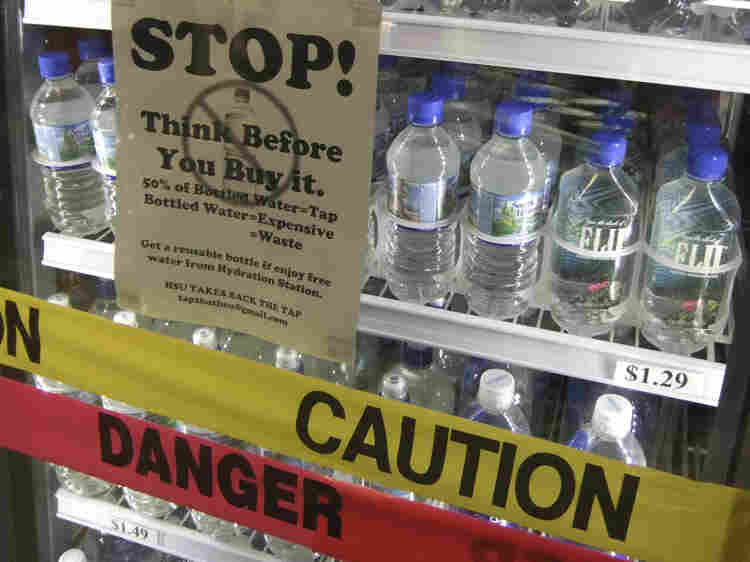 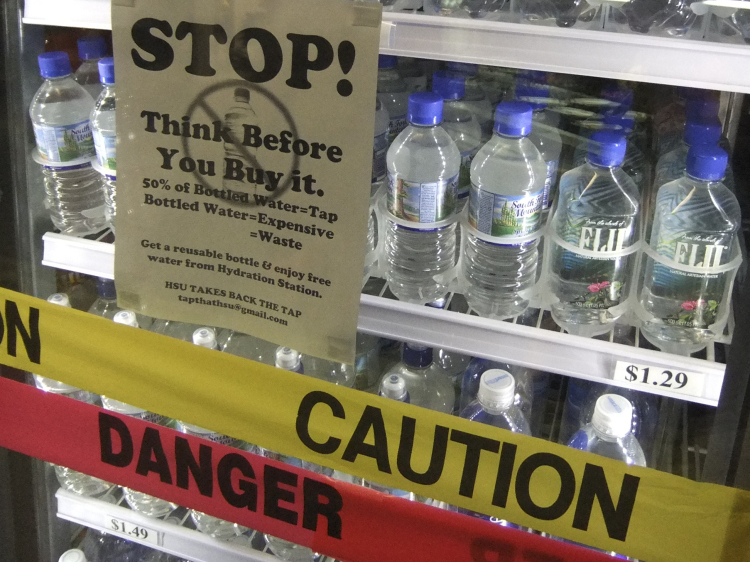 Bottled water is trickling away from college campuses nationwide, thanks to the efforts of student activists and the non-profit groups that support them with campaigns like Ban the Bottle.

But that's not going over too well with the International Bottled Water Association. The industry, which had $10.6 billion in revenue in 2010, went on the defensive this month with a YouTube video to counter what it calls "misinformation" used to turn college students against bottled water.

Corporate Accountability International, which created the Think Outside the Bottle campaign that has been used on some campuses, says more than twenty schools have complete or partial bans on bottled water because of environmental and health concerns about the industry. Macalester College in St. Paul, Minn., and California's Humboldt State University imposed campus-wide bans in September, and the University of Vermont announced last month it will end its contract with Dasani bottler Coca-Cola in July.

In addition to removing bottled water from vending machines, stores and cafeterias, students have pushed for reusable bottle hand-outs, water fountains, and filling stations. "We're really trying to make it part of the student culture to carry a water bottle," says Clare Pillsbury, a Macalester senior who led her campus's effort.

But the IBWA video suggests the cause is unworthy of students' energy – instead, perhaps they could focus on genocide in Darfur. It claims bottled water is a good alternative to sugary beverages and easier to recycle than other packaged drinks. The IBWA also argues bottled water is safer than tap water.

The students – and a lot of water experts and authors – disagree with most of these points. They say the bottles add up to a lot of waste, and that the companies have privatized something that should essentially be free.

So, what's the take-away?

IBWA president Joe Doss always circles around to freedom of choice. "It's not a tap water versus bottled water issue," he says; the industry just wants students to have the option.

And they do, the activists say – they just have to go off-campus.

The bottled water war is spreading beyond campuses, though. Several cities have stopped using public funds to purchase bottled water, and Grand Canyon National Park announced Monday it will stop selling water in containers smaller than one gallon.

Doss estimates his industry grew by five percent in 2011, so for now the freedom of choice looks safe. But that could change, if activists continue to get their way.

"The fact is, you could eliminate bottled water," Pillsbury says. "These companies are creating a product that we don't need."