Accessibility links
Coming Soon To Your Grocery Aisle: Organic Food From Europe : The Salt The U.S. and the European Union are announcing that they will soon treat each other's organic standards as equivalent. In other words, if it's organic here, it's also organic in Europe, and vice versa. 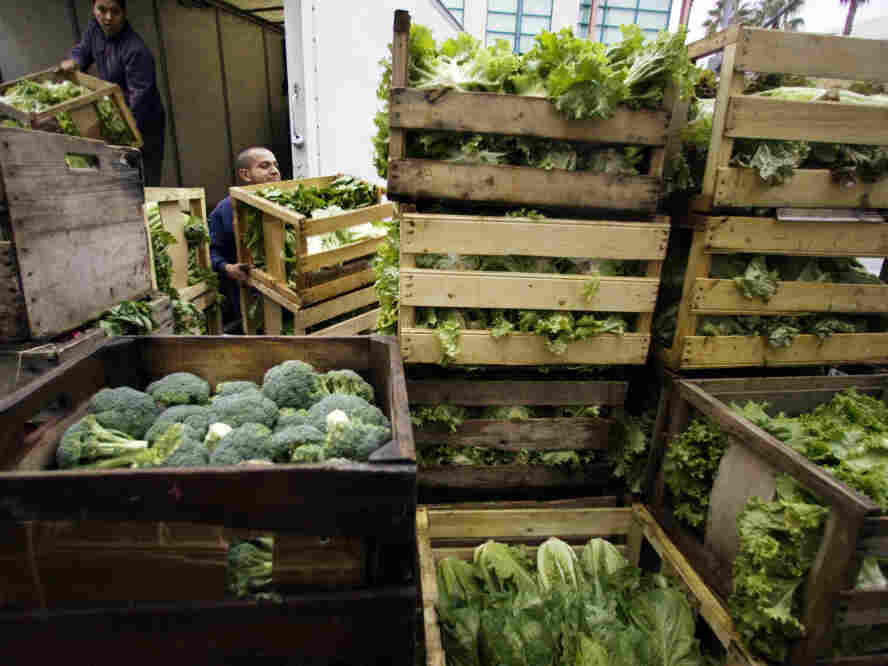 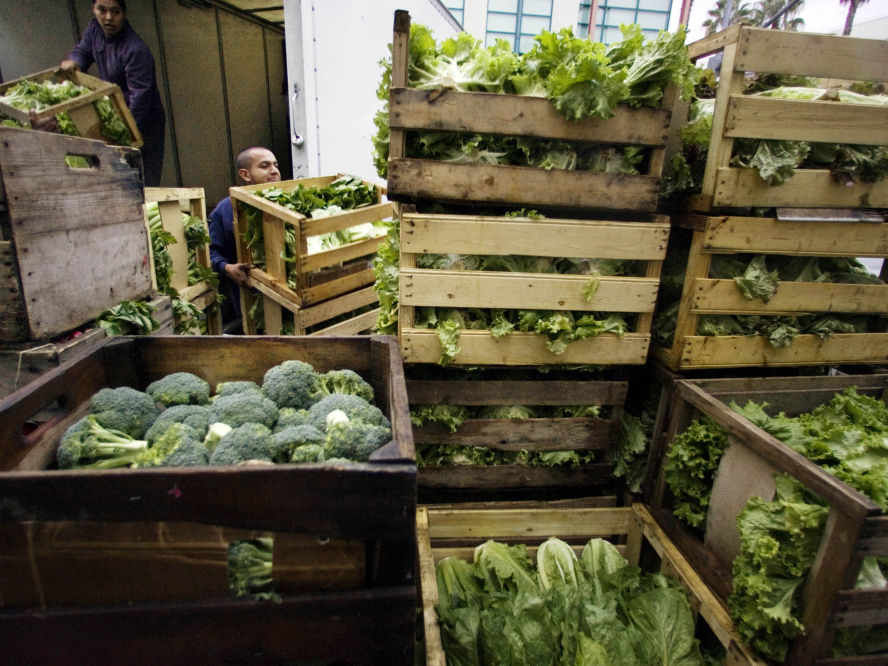 Edgar Jaime (right) and his brother Jose Luis unload organic vegetables from their farm in Santa Monica, Calif. Now that U.S. and European organic standards are equivalent, more American organic farmers will be able to export to Europe.

If you buy organic products, your options may be about to expand. The U.S. and the European Union are announcing that they will soon treat each other's organic standards as equivalent. In other words, if it's organic here, it's also organic in Europe, and vice versa. Organic food companies are cheering because their potential markets just doubled.

Those formal definitions of "organic" actually were codified quite recently — just a few decades ago. Before that, organic farming was more of philosophy, based on the idea that you could grow healthier food by nurturing natural life in the soil. In different countries, there were different prophets of this idea: Rudolf Steiner in Germany; Sir Albert Howard in England; J.I. Rodale in the United States. All of them became organic advocates early in the 20th Century.

But Samuel Fromartz, author of the book Organic, Inc. and editor of the Food and Environment Reporting Network, says the different parts of this international movement were talking to each other from the beginning, and they came up with very similar practices.

Eventually, though, groups of farmers realized that they needed rules and a system of certification to make sure that anybody using the label "organic" was actually following those rules.

"They didn't want some other guy who was using some sort of pesticide or chemical fertilizer to also claim that he was organic," says Fromartz.

Those rules have now been written into government regulations. But they are slightly different on either side of the Atlantic. So organic certification here in the U.S. doesn't mean you can sell something as organic in Europe, and the other way around.

As a result, Matt McLean, founder of Uncle Matt's Organic in Clermont, Fla., doesn't even bother trying to sell his oranges or grapefruit juice in Europe.

"They have a couple of different things that they won't allow, that we do allow in organic production," he says. Those differences "are very minor, but it's just a headache for us, if we have to farm differently in different fields and have to keep track of it."

If a European company wants to sell organic chocolate in both the U.S. and Europe, it has to get its cocoa growers in West Africa certified as organic according to both systems.

On June 1, though, that complication and extra expense will go away. With just a few exceptions, if it's organic on one side of the Atlantic, it will also be organic on the other side.

Kathleen Merrigan, deputy secretary at the U.S. Department of Agriculture, made the announcement Wednesday at a trade show of the organic industry in Germany.

"Everybody was hoping that this day would come, and that we could have free trade in organic agriculture and get consumers what they want," she told NPR.

Getting to this point meant getting over some prejudices, Merrigan says. Many Europeans had the feeling that U.S. standards were probably too permissive for the benefit of big organic agribusiness. U.S. officials, for their part, didn't think the Europeans did enough verification to make sure farmers actually follow the rules.

The two sides spent a couple of years visiting each other and decided that those preconceptions were wrong. Basically, they now say, the organic standards are equivalent. Any small differences, they'll just disregard.

There's one significant exception. In Europe, organic farmers who work with animals are allowed to treat illnesses with antibiotics. In the U.S., they aren't, and that prohibition will remain. No meat or milk from animals treated with antibiotics can be imported and sold in the U.S. as organic.

McLean, from Uncle Matt's Organic, is happy to know that exporting fruit to Europe now is a realistic option.

"I think it's a historic agreement that's going to create a lot of opportunities for U.S. food companies, and also farmers, for sure," he says.

Organic grain from U.S. farmers may flow toward Europe, and more European chocolate or olive oil may show up in American supermarkets. Officials from the U.S. Department of Agriculture are predicting that U.S. organic exports to Europe will triple within three years.