Accessibility links
Is That A Plastic Baby Jesus In My Cake? : The Salt How a mysterious traveling salesman made a porcelain baby Jesus a Mardi Gras tradition.

Is That A Plastic Baby Jesus In My Cake?

Is That A Plastic Baby Jesus In My Cake? 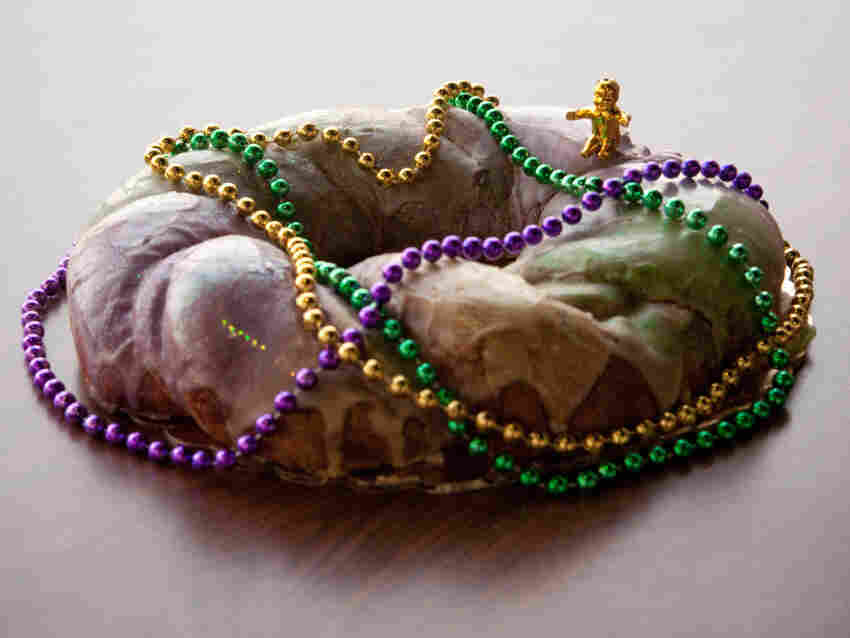 Sucre in New Orleans is one of many bakeries that leaves the plastic baby out of the king cake. John Rose/NPR hide caption 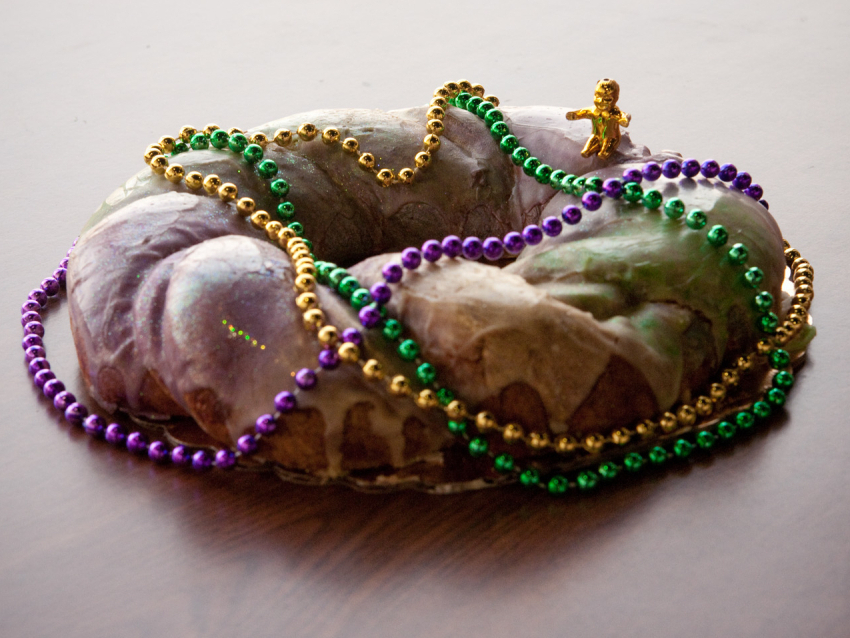 Sucre in New Orleans is one of many bakeries that leaves the plastic baby out of the king cake.

If you've been in New Orleans for carnival season, or if you're lucky enough to taste a cake from there that has arrived in the mail, there's a pretty good chance that yes, there is a plastic baby that comes with your cake.

The baby, meant to represent Jesus, has become a fixture of the king cake (galette des rois in France or rosca de reyes as it's called in Mexico). It's a frosted yeast dough cake that New Orleans bakeries churn out between King's Day, January 6th, and Fat Tuesday, the last day of indulgence before Lent.

But just how that baby got in the cake is a strange tale – featuring a crafty traveling salesman — that's worthy of the best Mardi Gras lore and ritual.

First, let's talk a little king cake history. The custom of eating a wreath-shaped or oval cake on January 6th to honor the Three Kings goes back to Old World Europe, most notably France and Spain. At some point the French and the Spanish brought the cake to the Americas, where it seems to have been most heartily adopted in New Orleans, Mexico and some other parts of Latin America.

Those early American king cakes were simple, dusted with a bit of sugar, and eaten at home with the family.

But historians say that sometime in the late 19th century, the Twelfth Night Revelers, a New Orleans social group that hosted the first Mardi Gras ball of the season, took up the custom of hiding a bean (later replaced by a pecan or a jeweled ring) inside the cake. According to the Times-Picayune Creole Cookbook, the lucky finder of the treasure would then be crowned king or queen of the ball.

Poppy Tooker, a preeminent New Orleans food expert and host of "Louisiana Eats" on NPR member station WWNO, tells The Salt that the big king cake revolution came along in the 1940s, thanks to a baker named Donald Entringer and a chance encounter.

His bakery, McKenzie's, was one of the biggest and most famous commercial bakeries in 20th century New Orleans. By 1950, king cake had become such a fixture of the Mardi Gras season, served over and over between King Day and Fat Tuesday, that people increasingly turned to commercial bakeries like McKenzie's to source their cakes.

One day Entringer was approached by a traveling salesman who had with him little porcelain dolls from France of a size that would fit in a dollhouse. "He had a big overrun on them, and so he said to Entringer, 'How about using these in a king cake,'" says Tooker. "That sort of entranced them, and he began baking these porcelain dolls into the king cake."

Entringer got permission from the health department to bake the dolls into the cakes, the Times Picayune reports.

After a while, Tooker says, Entringer ran out of porcelain dolls. So he went down to the French Quarter, where he found the little plastic king cake baby that we know today from an importer. "And so little plastic babies became the absolute positive rule."

The babies are indeed ubiquitous now, and come in a rainbow of colors, from somewhat realistic pink and brown, to green, purple and gold (the colors of the season).

But recently bakeries have stopped baking the baby into the cake, leaving it in the center of the oval for revelers to insert discreetly before serving. (Apparently, the idea of baking a piece of plastic in food doesn't go over as well anymore.)

Indeed, the cake we ordered in the mail from Sucre bakery – called the 21st century king cake because of its daring laquered silver frosting — last week had a gold plastic baby rattling around inside the package for the trip from New Orleans to Washington.

Tooker sees this is as a small tragedy. "We've become such a litigious society that nobody will put the baby inside the king cake anymore. That's really kind of sad."

Yet in an intriguing reversal, one New Orleans woman has revived the tradition of using a porcelain baby. Alberta Lewis sells porcelain figurines to Haydel's bakery, and comes up with a new design every year. And we're told by a friend in Mexico City, where roscas de reyes are now jammed with plastic babies, that porcelain is making a comeback there, too.

King cakes are so symbolic of Louisiana cuisine that they can be found as far away as Berlin, as this NPR story reports.

Whatever form the baby takes shouldn't diminish from the festivities that king cake helps mark — the sugary crown for a sweet season.