Accessibility links
Sprouts Growers Say They Need FDA To Set New Safety Rules : The Salt With yet another outbreak of sprout-related illness, sprouts growers they need the FDA to provide new rules so they can test new techniques for reducing risk. 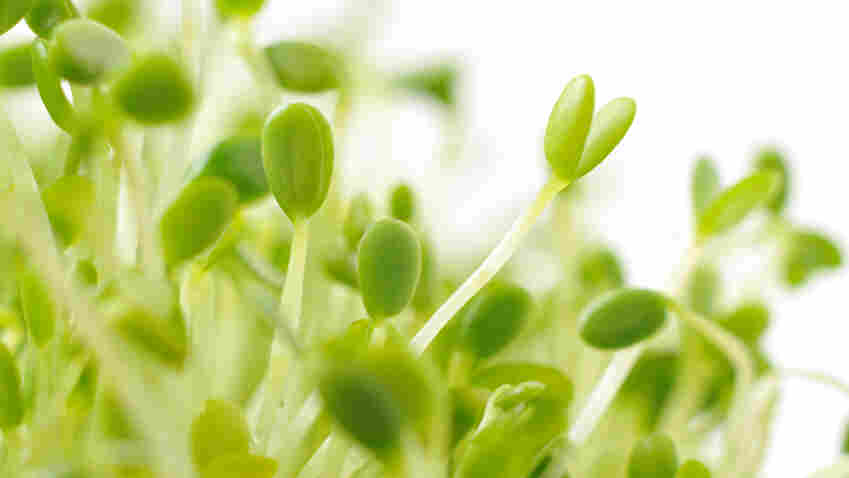 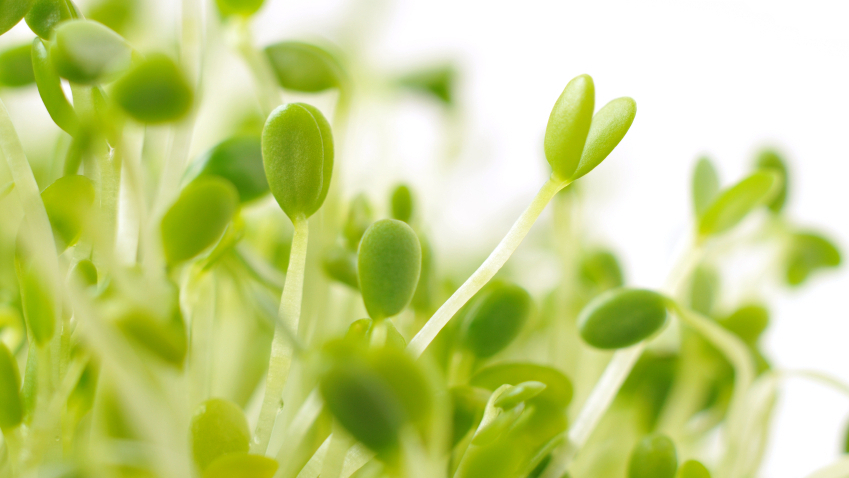 Clover sprouts look to be the source of the latest e. coli outbreak.

Another week, another outbreak of illness caused by sprouts. The latest troubles come to people who ate sandwiches from Jimmy John's restaurants in five Midwestern states.

The likely culprit is e. coli on clover sprouts, according to the federal Centers for Disease Control and Prevention. In the past year, problems with bacterial contamination of sprouts have been almost continuous, ranging from minor problems in the United States to a massive outbreak in Europe that killed 50 people.

So it seems like a good time talk with Bob Sanderson, president of the International Sprout Growers Association. He and his wife, Barbi, have been growing sprouts commercially in Rochester, Mass., for more than 30 years. But lately he's spending most of his time dealing with the pressing issue of safety and sprouts. Here are the highlights of our conversation, edited for length and clarity.

Q: The sprout industry is following guidelines issued by the Food and Drug Administration in 1999, which suggested that fairly high levels of chlorine be used to reduce the number of bacteria on seeds. What's your objection to that?

Sanderson: Chlorine is a very strong chemical, and it's pretty obvious that it's inconsistent in its effectiveness. Most European countries don't allow its use on foods. There's been a lot of research since then on other methods.

Q: What are some of the other possibilities?

A: There are some pretty sophisticated methods. The biggest I've seen is a hot-water treatment for mung beans developed by the Japanese. It's highly automated, and it's not practical for all kinds of seeds. We do grow mung beans, but we haven't got a system like that. We've have to really expand a lot to consider that.

There are liquid treatments related to citric acid that seem to be pretty good. They're not as dangerous to handle [as chlorine].

This month there's a treatment described in an article in the Journal of Food Protection. It involves an organic acid that's about the acidity of apple juice. There's also been some very interesting preliminary research into using existing organisms that are native to sprouts to control the ones you don't want. It's a new way of thinking about it.

Q: But you can't use those treatments unless they've been approved by the FDA?

A: Our customers are saying, has the FDA approved it? And the FDA has not approved anything. But they also haven't come out and said don't use it, because it's not as good as chlorine.

I don't think the problem is technological so much as it's in terms of coming up with criteria. The [FDA] guidance has just kind of been sitting there. There are have been eight or more of these research reports into alternatives, but nobody knows if they can use them or not.

Q: I'm wondering if one problem is that the sprout industry is really a niche, compared to, say, lettuce growers.

A: It's true. We don't have the research budget to hire a whole bunch of scientists. But I don't think money can solve all problems. Maybe in terms of getting people's attention and getting things into the pipeline, it can be useful. But in terms of better methods [for sanitation], there are lots of methods that have already been looked into.

I'm hoping that the new rules [that are part of the Food Safety Modernization Act] will say, here's what you have to do to be acceptable. That would free up the industry to come up with solutions.