Accessibility links
Can Gardening Help Troubled Minds Heal? : The Salt Psychiatrists have long claimed that gardens hold healing powers for mental illness. Now, scientists are exploring a new field called horticultural therapy for everyone from troubled youth to veterans. But just how gardens affect the brain remains mainly a mystery. 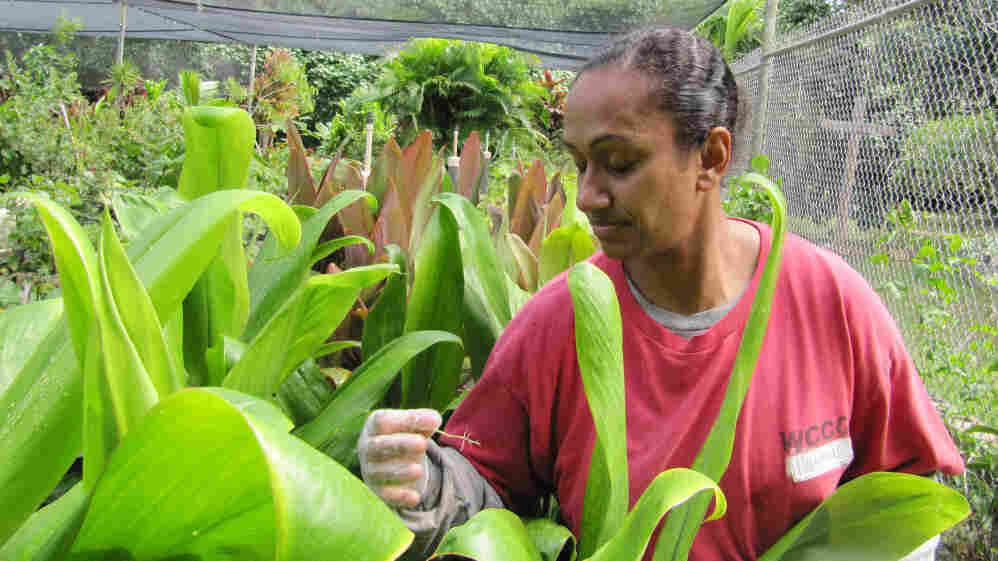 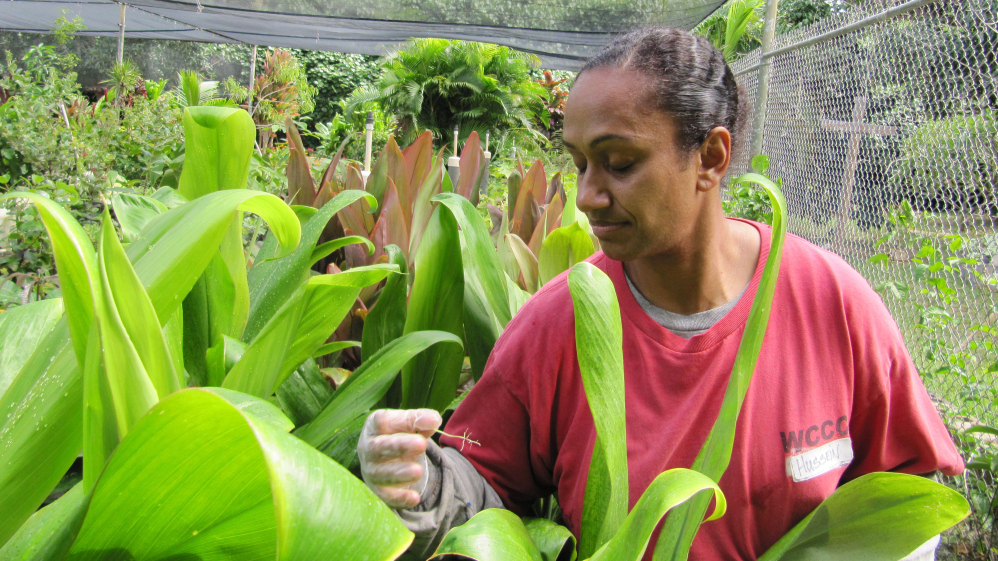 Women's Correctional Community Center inmate Lilian Hussein checks on ti leaves she planted as part of the prison's farming and gardening program in Kailua, Hawaii. The green ti leaves are often used to wrap food or weave into leis.

If you haven't noticed, gardens are popping up in some unconventional places – from prison yards to retirement and veteran homes to programs for troubled youth.

Most are handy sources of fresh and local food, but increasingly they're also an extension of therapy for people with mental health issues, such as post-traumatic stress disorder, or PTSD; depression; and anxiety.

It's called horticultural therapy. And some doctors, psychologists and occupational therapists are now at work to test whether building, planting, and harvesting a garden can be a therapeutic process in its own right.

Horticulture therapy dates back to Socrates, but it didn't become a scientific pursuit until the 18th century. That's when Benjamin Rush, a psychiatrist and Declaration of Independence cosignatory, began documenting how gardening benefited his mentally ill patients.

Much of the science behind just how gardening affects the mind and brain still remains a mystery. What scientists do know is that gardening reduces stress and calms the nerves. It decreases cortisol, a hormone that plays a role in stress response. So what about the biological mechanism behind mental disorders? That's a bit tougher.

Variables in the environment — such as climate, location, diet and genetics — have complicated some of the early research on horticultural therapy. So to pinpoint a causal relationship between gardening and mental rehabilitation, researchers have to use a balance of qualitative and quantitative studies, according to Elizabeth Diehl, editor-in-chief of the Journal of Therapeutic Horticulture.

A 2011 study at a juvenile rehabilitation center in southwestern Ohio with a gardening program showed that horticulture therapy helped the kids see themselves in a more positive light and helped them better manage their emotional and behavioral problems. And most of the kids said they would continue gardening after the program, according to the findings in the Journal of Therapeutic Horticulture.

One 2007 study in the journal Neuroscience found a bacteria found in soil linked with increased serotonin production in the brain — a sign that gardening could increase serotonin levels and improve depression.

Social scientists have also been looking at gardens built by and for the homeless, ex-convicts on probation and hospital patients. The results of early studies suggest they have a positive impact. Most people tend to not revert back to bad behavior and many make changes in their lives for the better, the studies show.

For now, that evidence seems to be enough to fuel the burgeoning field — programs like a camp for troubled teens in Hawaii, called Pacific Quest. Program staff tell The Salt they believe the garden is a beneficial tool to emotionally engage the kids.

For a few months, students — many with psychological issues from trauma, adoption, depression — band together and run a garden from the seed to the dinner plate. "They are introduced to the garden by eating the food planted by [a camper] who was in their shoes just a few months ago," Travis Slagle, a Horticultural Therapy Association member and land supervisor for Pacific Quest, tells The Salt. "That builds their curiosity."

Horticulture therapy offers at least one big advantage for the kids: The garden setting never changes. This gives them ample time to connect with their surroundings and feel at home.

"With the garden, you're living in a place and learning about the community and building a community," he says. That stable environment can help the kids let their guard down.

Students build the garden beds, plant the seeds, care for the seedlings and cook the food — all with minimal help from the staff. The teens learn how to problem solve on their own, as well. Slagle says they build rock walls for support and plant companion plants for certain veggies or fruit.

"They can see the parallel of the garden and relate it to their own lives," he says. "It provides ways to engage in conversation and life lessons." The kids, who meet with counselors and therapists regularly throughout the process, are learning to prepare for the moment but also to plan for the future, he says. Doing both at the same time requires maturity, and wisdom and that's something the garden brings out, he says.

The kids take the extra passion fruit, kale, onions, carrots, beets, bananas, and pineapples to the local farmer's market to sell. The profit is donated to a local charity. "The garden allows them to recognize that it's not something that's just going to benefit themselves," he says. "It teaches that in an experiential way."