Accessibility links
Panda Express Takes Sweet And Sour Beyond The Food Court : The Salt Food court mainstay Panda Express is now in the midst of a major transformation. It's adding premium products like Angus steak and portobello mushrooms, and new flavors to keep pace with an increasingly sophisticated American palate. But that fiendishly tasty orange chicken isn't going anywhere. 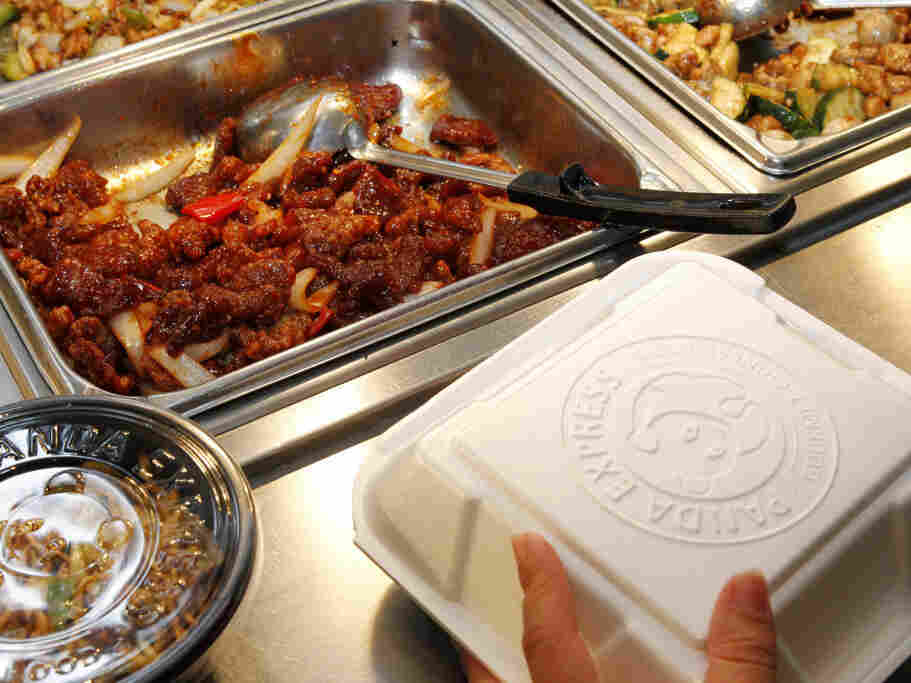 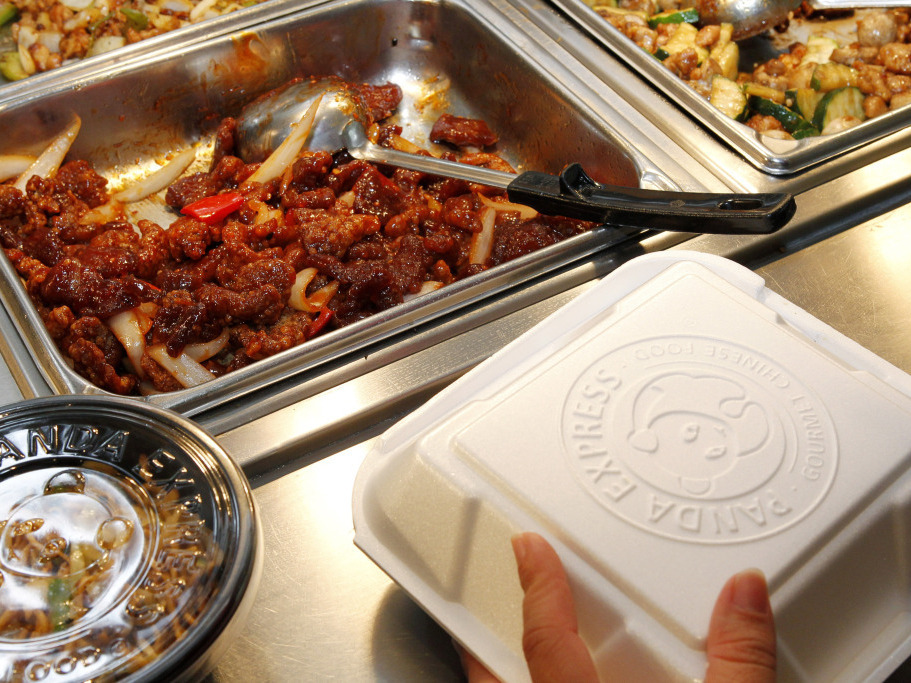 An employee packs a customer's takeout order at a Panda Express restaurant in Los Angeles.

Not all that long ago, many Americans thought of Chinese food as fried rice, chow mein and orange chicken. And one reliable place to find it was at the mall, at places like Panda Express.

But food court mainstay Panda Express is now in the midst of a major transformation. That means moving from mall basements to stand-alone restaurants and keeping pace with an increasingly sophisticated American palate.

"It was my entryway into Chinese food," says Devin Niebrugge a bit wistfully. The 23-year-old California transplant is enjoying a late lunch at a Panda Express in Washington, D.C. "I feel like you start with Panda Express and when you start to like that, then you go to the more local Chinese restaurants and experiment a little more."

Panda Express is now one of the fastest-growing chains in the U.S. For the past 28 years, head chef Andy Kao has worked to stay ahead of food trends.

"Before, I just gave customers a big chunk of meat," Kao said at a suburban Los Angeles Panda that was turned into a temporary test kitchen last fall. "Now I need to make sure [the] nutrition's good."

One of Panda's challenges is countering the perception of Chinese food as oily and fried. Since 2007, Panda has publicly made a point of serving 20 different kinds of vegetables all chopped in-house every day. 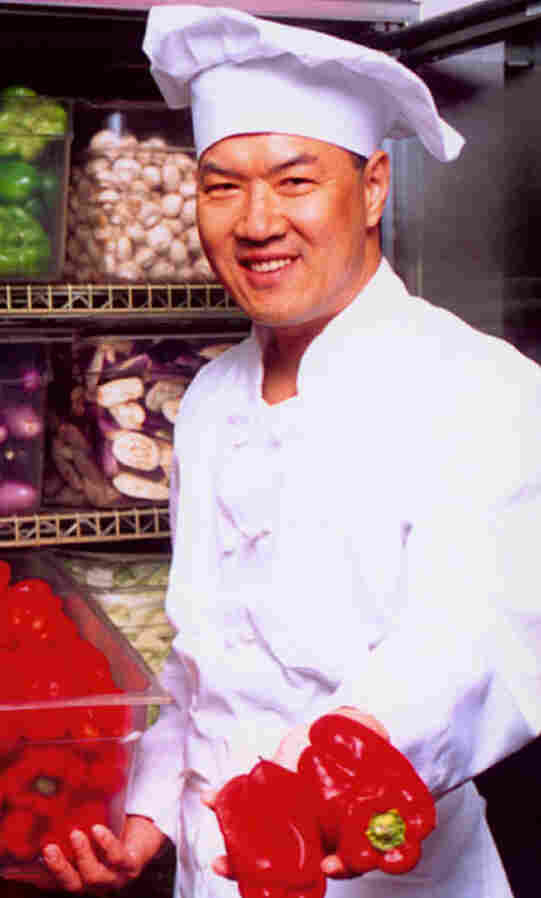 Of the 150 recipes Panda Express Chef Andy Kao dreams up every year, only one or two will make it to consumers. Courtesy of Panda Express hide caption

Freshness is a strategy it shares with other "fast casual" restaurants such as Panera Bread and Chipotle. The niche thrived during the recession by highlighting quality ingredients in meals costing less than $10. To compete in a "Food Networked" world, Kao has had to somehow showcase Panda as generally appealing yet authentically ethnic.

"Sweet and sharp and salty," she smiles. "You don't want any one flavor to stand out. You want it to be balanced."

To create another Panda platonic ideal, Lui and Kao are in the process of testing a brand new recipe for shrimp. Such premium products (along with Angus steak and portobello mushrooms) are part of Panda's plan to go more upscale. But the bottom line is steam table sustainability.

"So we'll taste it fresh and we'll taste it held," Lui explains. "And we'll see if the flavors and textures are holding up, and if not, we'll go back to do more development work."

Of the 150 recipes Kao dreams up every year for Panda Express, only one or two will make it to consumers, usually after years of trial and error. I watched Lui and product development coordinator Adrian Lok narrow down sauces.

"We had to put out 60, 70 sauces and taste each one," Lok says. The day I visited, they'd screened it down to six. Panda did not want me to reveal the flavors, but they would be familiar to anyone who enjoys a range of Asian cuisines. Smart, says food industry consultant Darren Tristano, who points to the success of Sriracha rooster sauce. He says Americans are craving a flavor profile Panda's well-positioned to provide.

"The spiciness, that teriyaki flavor," he enthuses. "Those different types of sour and tart and tangy. They're really starting to become more appealing. In fact, if you just look at the kids' aisle for candy [in the grocery store], that's most of the types of food we see. Very tart and sour flavors are what kids are looking for."

So are older kids, like the college students who routinely devour Korean food and seek out Korean-influenced frozen yogurt, like Pinkberry. It's reflective of a changing American palate. Tristano says there are about 40,000 Asian restaurants in the U.S. that represent about 13 percent of all full service sales.

"Compared to Italian at about 11 percent," he observes. "Now Italian used to be larger than Asia, but the two have flipped over the past two years."

Tristano admits that "Asian" seems like ridiculously broad category compared to Italian, but it's in Panda's interest to play up a pan-Asian approach; one stop for Chinese, Korean and Thai.

In fact, the final version of that test kitchen shrimp that landed on Panda's steam tables last week uses spicy Thai green peppercorns. Sales are up 5 percent since the launch of peppercorn shrimp. Customer Niebrugge says Panda can innovate all it wants. Nothing would persuade her to order anything but her beloved orange chicken.

"You know it's always the biggest tray on the little buffet line," she points out. "Everybody eats it."

A few new Panda Expresses open every month, most recently in Mexico City, joining about 1,500 Pandas so far. That's 30 percent more than 10 years ago. Over the long term, Panda plans to express itself to the tune of 10,000 restaurants all over the world.