Accessibility links
Why Astronauts Crave Tabasco Sauce : The Salt Why do astronauts lose their sense of smell in space, and what's this got to do with their preference for fiery condiments? No one is sure, but NASA food scientists have some plausible ideas. 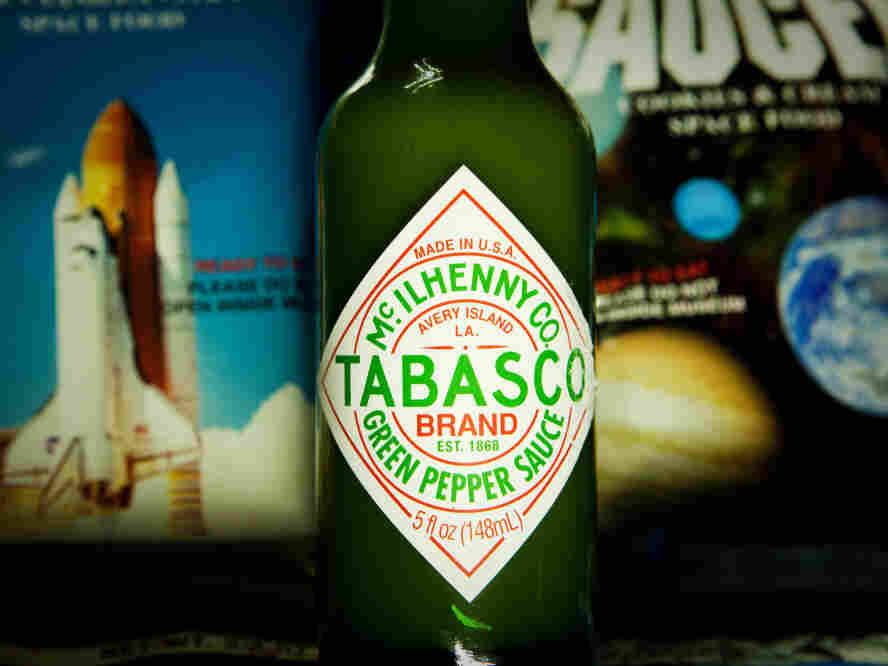 Astronauts may have a particular affinity for Tabasco sauce in space because their sense of smell and taste is distorted. John Rose/NPR hide caption 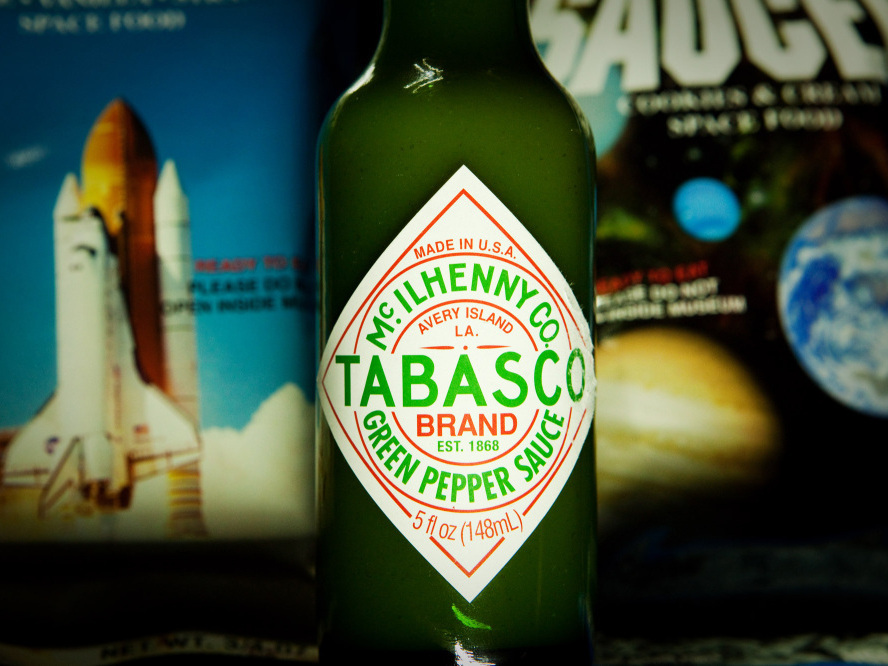 Astronauts may have a particular affinity for Tabasco sauce in space because their sense of smell and taste is distorted.

If you think astronauts just want dehydrated dinners and freeze-dried ice cream, think again. After a few days in space, they start reaching for the hot sauce.

In fact, they may start craving foods they didn't necessarily like on Earth.

"They crave [spicy] peppers, they crave sour and sweet things," says Jean Hunter, a food engineer at Cornell University. That means Tabasco sauce was definitely on the menu for space shuttle astronauts.

Why this sudden interest in hot peppers? Part of the reason may be that after arriving in space, astronauts lose their sense of smell, which largely governs the pleasurable taste of food. An example of this is coffee. "If you hold your nose and sip your coffee, you're getting just a bitter liquid," says Hunter.

Why do astronauts lose their sense of smell, and what's this got to do with a preference for fiery food? No one is sure, but there are some plausible ideas.

Michele Perchonok leads NASA's food science program. She says one possibility is what happens to the fluids in your body in a weightless environment. On Earth, gravity tends to drag those fluids downward, toward your feet. In space they go everywhere, including to your head, so after arriving in space, you begin to look like a cartoon character.

"We call it the Charlie Brown phase, because their faces have gotten more round," says Perchonok. Round, because they are retaining fluid in their heads. "And as they retain fluid, they also feel like they have a cold or they're congested, and again they're not smelling as much."

Perchonok has asked Hunter and her crew at Cornell to test the stuffy nose theory. To do that on Earth, volunteers will spend several weeks in a bed where their heads are lower than their feet to try to re-create that Charlie Brown effect.

As for the preference for hot peppers, one theory is that as the sense of smell is blocked, another starts to take its place: the heat of the peppers.

Kimberly Binsted at the University of Hawaii, Manoa is trying to figure out what the best menu options are for people whose sense of smell is diminished. And she is now recruiting participants for a Mars habitat simulation.

She plans to stock the habitats with spices and herbs and duck fat. She says duck fat doesn't weigh any more than margarine, is just as stable, and tastes better.

She's also going to encourage her participants to experiment in their food preparation. Even without fresh fruit and vegetables, Binsted says it's possible to make some interesting culinary creations.

"With powdered milk alone you can make a pretty poor mozzarella," she says. "But it's a mozzarella anyway, and after you've not had fresh cheese for several months, even a little bit of not-very-good mozzarella is a wonderful, wonderful thing. You can melt it on some toast, you can make a basic pizza. It becomes a real treat."

And besides, figuring out new food combinations can help take your mind off the stress of being locked up in a tiny space with a half-dozen others.

If the idea of pretending you're on Mars for four months is appealing to you, Binsted is still taking applications from people who want to join her simulation.