Accessibility links
In Rice, How Much Arsenic Is Too Much? : The Salt People are asking how much arsenic in food is too much, but they're not getting answers. Scientists say they know a lot less about arsenic in food than they do about the toxic element's effects in drinking water.

In Rice, How Much Arsenic Is Too Much?

In Rice, How Much Arsenic Is Too Much? 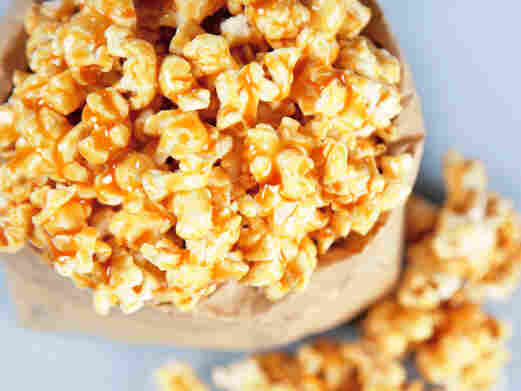 Brown rice syrup, which can be high in arsenic, is sometimes used in vegan recipes like this caramel corn. iStockphoto.com hide caption 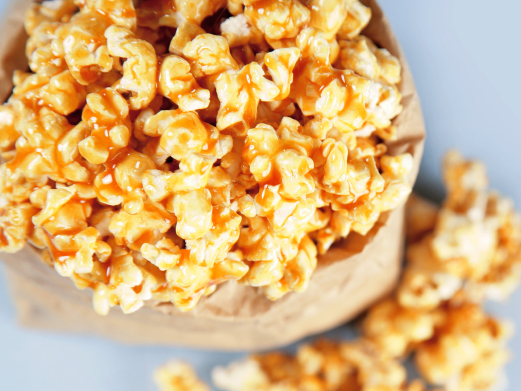 Brown rice syrup, which can be high in arsenic, is sometimes used in vegan recipes like this caramel corn.

The news that some rice-based foods are surprisingly high in arsenic has left rice lovers wondering how the heck we're to know what's safe to eat.

Since Dartmouth College researchers reported last week that a toddler formula and energy bars sweetened with organic brown rice syrup tested high for arsenic, readers of The Salt have had lots of questions about how one might find out the arsenic content of rice-based foods, and figure out what's safe.

There is no federal limit for arsenic in food, even though trace amounts of the toxic element are commonly found in rice, fruits, juices, beer, flour, corn and wheat, depending on where it's grown. The toxic stuff is inorganic arsenic, which is different from organic arsenic. Organic arsenic is found in nature but passes through the body quickly.

The Dartmouth scientists compared their findings to the federal standard of 10 parts per billion for inorganic arsenic in drinking water. But they were quick to say that's not a good yardstick for food exposure, and that we're overdue for a rule for food, too.

That's seconded by Andrew Meharg, a professor of biogeochemistry at the University of Aberdeen who's an expert on arsenic.

"The safety thresholds for chronic inorganic arsenic [in water] are well-established," Meharg told The Salt via email. "Food needs to be put on the same footing as water standards." The human body doesn't care whether the arsenic comes from food or water, he notes, and it's not hard for food to contain enough arsenic — an equivalent to the 10 parts per billion standard for water — to increase a person's risk of cancer, heart disease, and other health problems.

Scientists have known for decades that rice has a special affinity for arsenic, soaking it up from the soil more efficiently than other grains.

In the United States, a 2007 report found that rice from some south-central states contains almost twice as much arsenic as California rice, on average, because arsenic-based pesticides were used earlier for growing cotton. Siobhan DeLancey, a spokeswoman for the U.S. Food and Drug Administration, told The Salt: "Those are the areas we are more concerned about."

For those reasons, last year the FDA started testing the levels of the inorganic arsenic in rice and rice products. Those results should be available sometime this spring, DeLancey says.

Back in 2009, the U.S. Environmental Protection Agency ran a computer model estimating that the amount of arsenic that Americans consume in food and water is well below the federal limit for water — about one-fifth of that level. But the study results also showed that some foods could be as important as, or more important than, water as a source of the metal.

So far only China has set a standard for inorganic arsenic in rice — at 0.15 microgram per kilogram of body weight per day. But Meharg says this is too high a standard for babies and small children, who are growing quickly and have smaller bodies.

"There's much less research in arsenic and food," says Brandon Pierce, an assistant professor of epidemiology at the University of Chicago. "The food studies researchers are saying these levels are potentially harmful, and industry is saying no."

The best data on arsenic and health comes from Bangladesh, where millions of households have been exposed to high levels of arsenic in well water. That has increased their risk of cancer, heart disease, and perhaps diabetes. Using well water for irrigation has also increased the amount of arsenic in rice, a major food source for Bangladeshis.

Pierce studies the effects of arsenic on people in Bangladesh. The risk appears to be dose-related, he says, with higher levels of arsenic increasing disease risk. (A new study by Pierce and his colleagues in the journal PLoS Genetics found that genetic variations affect people's susceptibility to arsenic.)

It's a lot harder to find studies on diets and situations more typical of rice consumption in the United States.

In 2009, the British warned parents against feeding rice milk or other rice drinks to children under age 5. The drinks sampled had low levels of arsenic, but the regulators said because children drink a relatively large amount of milk, their intake of arsenic would be greater than that of older children and adults relative to their body weight. "A daily half pint or 280 milliliters of rice drink could double the amount of the more harmful [inorganic] arsenic they consume each day," the Food Standards Agency concluded.

Babies are often fed rice-based foods because they're thought to pose less of an an allergy risk than wheat.

Last year, Spanish researchers tested rice-based baby food, and found arsenic levels high enough that they wrote "it seems imperative that legislation on maximum residues of arsenic in food should be available as soon as possible to protect consumers worldwide."

Research is needed to pinpoint types of rice that are less likely to accumulate arsenic in the grain, they added. "Otherwise the rice percentage in infant foods should be reduced."

Concentrated foods like rice bran or brown rice syrup, which is sometimes used as a sweetener in vegan recipes, can be very high in arsenic, Meharg says.

The formula that tested high for arsenic in the Dartmouth study was a soy-based formula made by Nature's One of Lewis Center, Ohio. Organic brown rice syrup is the primary ingredient. Yesterday the company posted a statement saying that their products "meet all safety requirements of the Federal Food and Drug Administration".

But those FDA requirements don't include limits for arsenic in food.

The Salt talked with Karla Highman, Nature's One director of marketing and a company co-founder, who said that indeed the FDA safety requirements do not include testing for arsenic. She said that the FDA took samples of the toddler formula earlier this week for testing.

What can parents and rice lovers do while the scientists and regulators come up with standards?