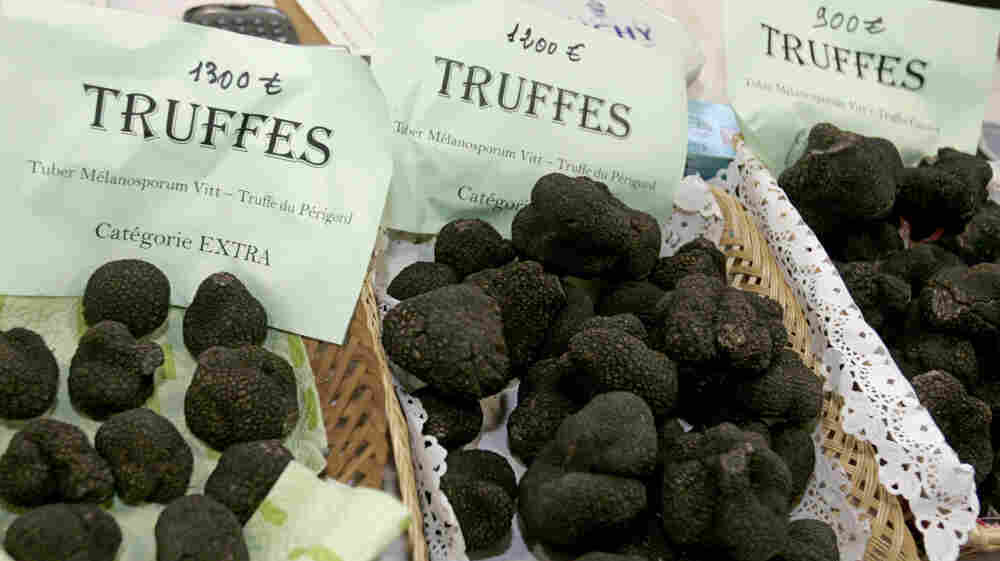 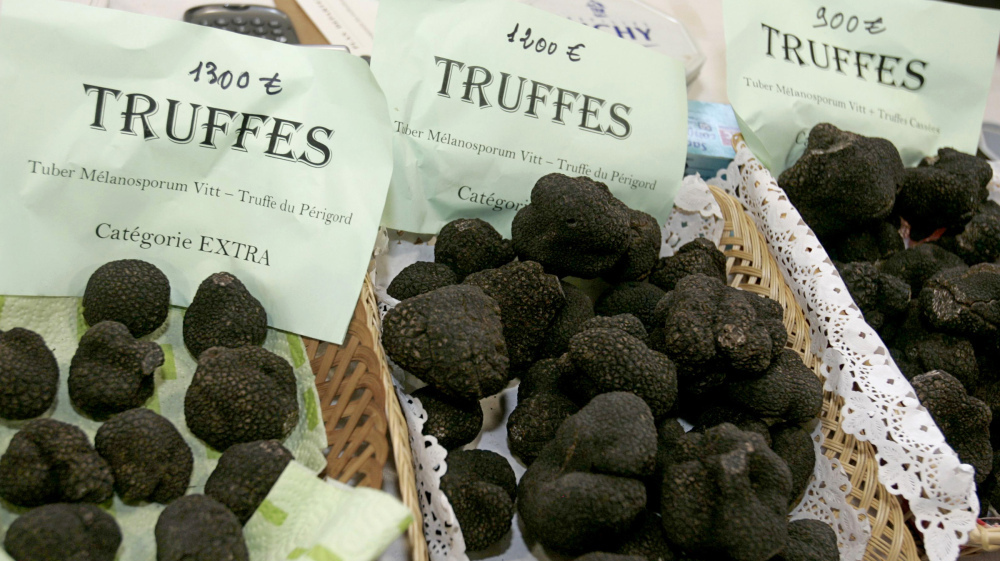 Perigord truffles for sale in southwestern France. American farmers say they've figured out how to make the delicacy flourish in Appalachian soils.

As orchards go, truffle orchards are upside-down and backwards. The magic happens not on the branches of oak and hazel trees, but beneath them, where a richly flavored mushroom sprouts from fungal colonies laced about the trees' roots. This cultivated variety is the black Perigord truffle, or tuber melanosporum.

These truffles are notoriously hard to farm, even in France, where Perigords originate. Now, in the rolling hills and clay soils of eastern Tennessee and western North Carolina, a growing number of farmers are hoping to establish southern Appalachia as the new truffle capital of the world.

Tom Michaels, owner of Tennessee Truffle, says he was the first American to grow Perigords commercially in 2007, from trees inoculated with melanosporum fungus using a relatively new French technique. He tells The Salt that about 200 orchards are now in development in the U.S., but because it takes years before truffles appear, few are producing yet. "The next few years are the moment of truth" for the burgeoning industry, he says.

Restauranteurs and gourmands are taking notice. Last weekend Michaels joined a roster of truffle experts at the fourth annual National Truffle Fest in Asheville, N.C. Similar celebrations of the truffle have sprung up in Oregon, where wild and cultivated truffles grow, and Napa Valley, in recent years.

Although there are dozens if not hundreds of truffle species – some native to North America – most are not edible. Among palatable varieties, the Perigord is considered the crown jewel and, accordingly, is known as the "black diamond" truffle. It's prized for its pungent aroma, a delicate mix of fruit, musk, and earth.

Michaels says each truffle has a unique flavor profile. He selects them individually to meet his customers' requests, and delivers them fresh the next day, which has earned him accolades from chefs like Momofuku's David Chang. European truffles can take ten days to reach American kitchens, by which time the flavors have already started to fade.

Freshness doesn't come cheap, however: Even American Perigords can fetch upwards of $800 a pound.

The long years of cultivation mean many truffle growers are still in the dark about how to squeeze the most from their trees. How far apart to place the trees, or what balance of minerals to maintain in the soil, are still very much open questions. Michaels says managing a truffle orchard "is really art. It's not [yet] a science at this point."

But truffle-gathering will probably always rely on old-world methods: specially trained dogs – or pigs, who find truffles irresistible – to sniff out the mature fungi.

Between rapid growth and rising demand, the small American truffle industry could soon be big business. Michaels says he currently harvests just 3 to 5 percent of what his orchard could, in theory, produce.

"I'm supposed to be famous because I grow a few pounds per acre," he says. "But if you look at what is possible, it's way more than that."