Accessibility links
Kids Don't Mind If You Put Veggies In The Cake : The Salt Kids surprised researchers at Columbia University by being just as happy with some treats even if they knew they had vegetables. The cookies were another matter, though.

Kids Don't Mind If You Put Veggies In The Cake

Kids Don't Mind If You Put Veggies In The Cake 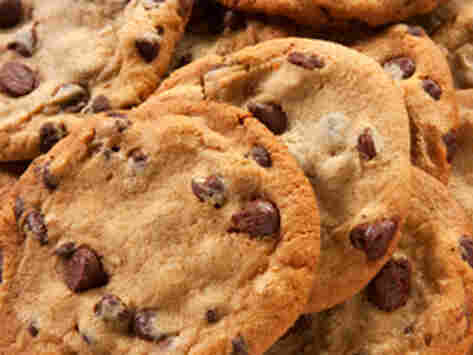 Chocolate chip cookies don't seem to be a great vehicle for chickpeas, according to kids. Robert Linton/iStockphoto.com hide caption

Will kids eat their veggies if they're inside desserts? Parents and nutritionists have been debating this question for years.

Now, it seems there's an answer: Yes, if it's broccoli in the cake. No, if it's chickpeas in the chocolate-chip cookies.

Nutritionists generally hate the idea of "stealth veggies," arguing that children should learn to eat their vegetables and like them, darn it. They got really bent out of shape after reading The Sneaky Chef by Missy Chase Lapine, and Deceptively Delicious by Jessica Seinfeld, both of which argued for sneaking veggies into kid-friendly foods.

That sure got me dialing the phone. Lizzy Pope, the lead author of the study, says the cookies did indeed contain actual chickpeas. "You just pour a can of chickpeas into your cookie dough.

"I thought they were pretty good, actually," says Pope, a registered dietitian who is now a PhD student at the University of Vermont. She says the cookies are a bit moister than usual, but that the chickpeas tend to blend in with the dough.

Pope served her creations to 68 children, ages 8 through 14. The trick was that all the desserts contained stealth items, but only half were labeled that way. The other half were falsely labeled chocolate chip bread, gingerbread spice cake, and chocolate chip cookies.

Kind of a reverse deceptively sneaky.

The children surprised the researchers by being just as happy with the bread and cake, whether or not they were labeled as having vegetables. The cookies were another matter.

The kids voted overwhelmingly for the cookies they thought had no chickpeas, and rejected the overtly leguminous ones.

Pope thinks the problem wasn't chickpeas per se. It's that most of the kids weren't familiar with them. That wasn't the case with broccoli and zucchini. "It was a neophobia thing going on."

The take-home message, at least from this study: "You don't have to hide vegetables in food to get kids to eat them," Pope says. The research was published in the current Journal of Nutrition Education and Behavior.

Instead, she says, telling children there's a vegetable in what they're eating might not be a bad idea at all.

Especially if it's a broccoli gingerbread spice cake.

For more on adventures in upping the vegetable content in food, check out Allison Aubrey's report on school lunches. Or check out Lizzy's Pope's blog on her study.