Accessibility links
Farmers Face Tough Choice On Ways To Fight New Strains Of Weeds : The Salt In large sections of America's farmland, new strains of weeds are making life miserable for farmers. They've developed resistance to the country's No. 1 weedkiller, Roundup. Now farmers face a choice: Do they go for yet another kill-all-the-weeds chemical, or go back to more complicated, labor-intensive ways of fighting weeds? 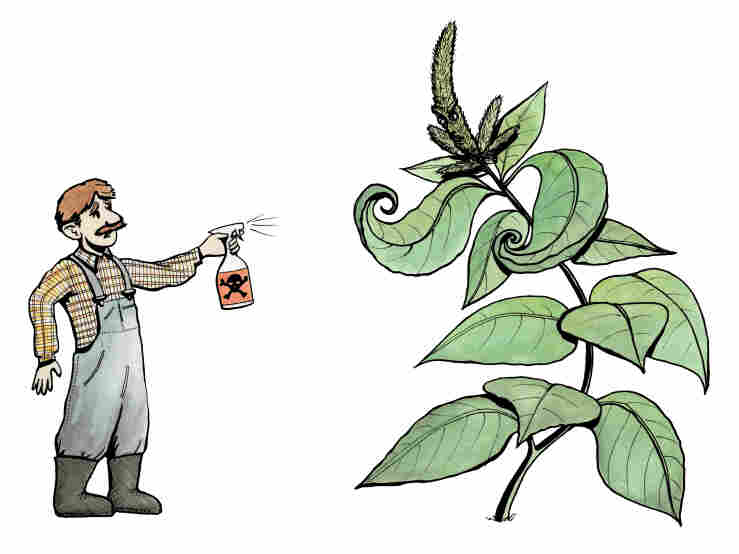 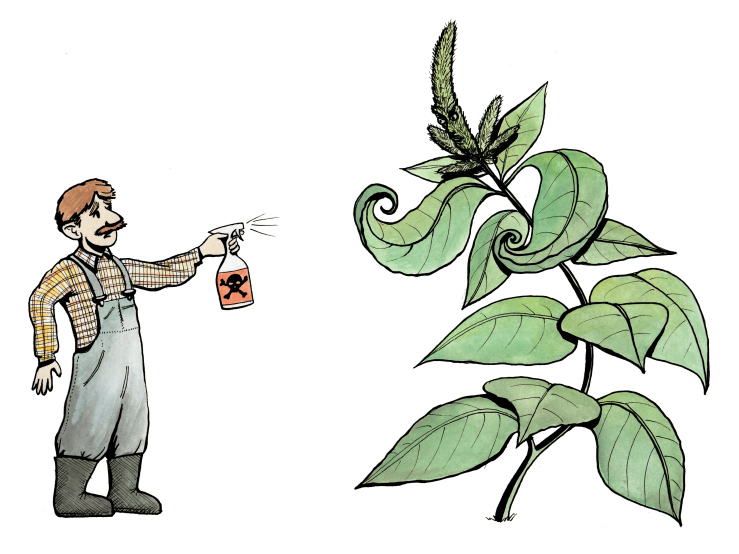 OK, so this story is about weeds and weedkillers, neither of which is ever the hero of a story, but stay with me for a second: It's also about plants with superpowers.

Unless you grow cotton, corn or soybeans for a living, it's hard to appreciate just how amazing and wonderful it seemed, 15 years ago, when Roundup-tolerant crops hit the market. I've seen crusty farmers turn giddy just talking about it.

All they had to do was spray the herbicide Roundup over their fields and everything died — except their remarkable new crops, with their laboratory-inserted genes that made them resistant to that weedkiller.

Alas, the giddiness faded. In more and more places across the country, farmers now are struggling to deal with weeds that their favorite weedkiller won't kill anymore. The weeds, too, have evolved Roundup-resistance superpowers.

Now, a hot debate has erupted over what farmers should do next. Should they adopt a new generation of genetically engineered, herbicide-resistant crops? Or turn away from chemical herbicides altogether? (A national summit on this issue is planned for May, in Washington, D.C.)

To get a closer look at this debate, I went to south Georgia, where farmers are fighting one of the most irrepressible of the new superweeds. It's called Palmer amaranth, known to the locals here as pigweed.

"It started just north of us," recalls Randy Bryan, who grows cotton in Irwin County. "And then all of a sudden, it was all over south Georgia. We had it everywhere."

Palmer amaranth can grow 3 inches a day. A single plant can release close to a million seeds. It's a bully; if you let it grow beside cotton seedlings, the poor cotton doesn't stand a chance.

Many farmers still spray glyphosate, but then they have to hire people to go in to the fields and pull pigweed by hand, or chop it down with hoes.

"I have a brother-in-law who told me he spends $120 an acre on hand labor," says Van Grantham, a cotton grower in Coffee County. That's about four times what farmers spent to control weeds five years ago.

Cotton prices are high right now, so nobody is abandoning the crop altogether, but if prices returned to normal levels, the cost of containing Palmer amaranth could make cotton unprofitable.

Farmers are looking for alternate solutions, and in Georgia, they turn to Stanley Culpepper. He's a weed scientist at the University of Georgia and the state's expert on cotton weeds. This time of year, he spends his days driving from county to county, delivering talks to cotton farmers.

Culpepper grew up in North Carolina, and comes from a long line of farmers. He talks to his cotton growers like a football coach giving his players some tough love.

"We all agree: There can be no glyphosate-resistant Palmer amaranth at planting, right? We've crossed the bridge. We know there has to be no Palmer at planting or you won't pick your crop. If you do pick your crop, it won't be economically sustainable," he told a hall filled with about 70 farmers in Coffee County.

You're going to have to spray a lot of different chemicals to overwhelm the enemy, Culpepper tells the farmers. Some will kill your cotton if you aren't careful.

Then, Culpepper puts up a new slide. It's a picture of a field that's covered with a layer of rye, flat on the ground.

This residue works as well as any weedkiller, he tells the cotton growers. Pigweed just despises it. So the system would be: Grow a crop of rye, then roll it flat to keep weeds from growing. But leave some narrow gaps in the rye, and that's where you plant your rows of cotton.

Culpepper explains that he's still working out some kinks in this technique. But in just a few years, he says, it could be a big part of the pigweed solution.

"If we can work it out, this is the most sustainable program that we as cotton growers could do, bar none, for resistance management and Palmer amaranth control," he says.

This is Culpepper's recipe for surviving in a world of weeds that could become resistant to your most popular herbicides: Do lots of different things to fight the weeds. Some of them involve chemicals, some don't. Some will mean more work. But the work is worth it.

But Culpepper's is not the only recipe in the room. The one that may prove to be really tempting for farmers is one offered by three other non-farmers in the room this evening. They represent three big cotton seed companies: Dow AgroSciences, Monsanto and Bayer CropScience.

Those companies are selling — or plan to sell, within a few years — crops that have been engineered to tolerate other herbicides that will kill pigweed. Farmers will be able to spray those herbicides — long-established chemicals called 2,4-D and dicamba — right over their crops, just as they do today with glyphosate.

Some environmentalists are angry about these new products. The Natural Resources Defense Council, for instance, says 2,4-D is dangerous and ought to be banned.

And David Mortensen, a weed ecologist at Penn State University, predicts that weeds will evolve resistance to these herbicides, too. He says it's a kind of treadmill, where farmers constantly need new weedkillers.

"When one herbicide fails, you add a second herbicide, and then a third herbicide to the package. And I am convinced that this is not a sustainable path forward," he says.

The University of Georgia's Culpepper, meanwhile, stands somewhere in the middle of this argument.

"Let's be clear: I want all the new technology that's economically and environmentally friendly for our growers that we can get," he says.

The key is not to misuse them; not to rely just on one or two of them, because then the weeds will adapt.

Culpepper thinks his farmers have learned that lesson, and what happened with Roundup doesn't need to happen again.