Accessibility links
At The Community Garden, It's Community That's The Hard Part : The Salt In cities across the country, most community gardens are divided up into individual plots. It means if some of your neighbors start shirking their responsibilities, it's not really your problem. But there are also still a lot of people doing communal-style gardens. 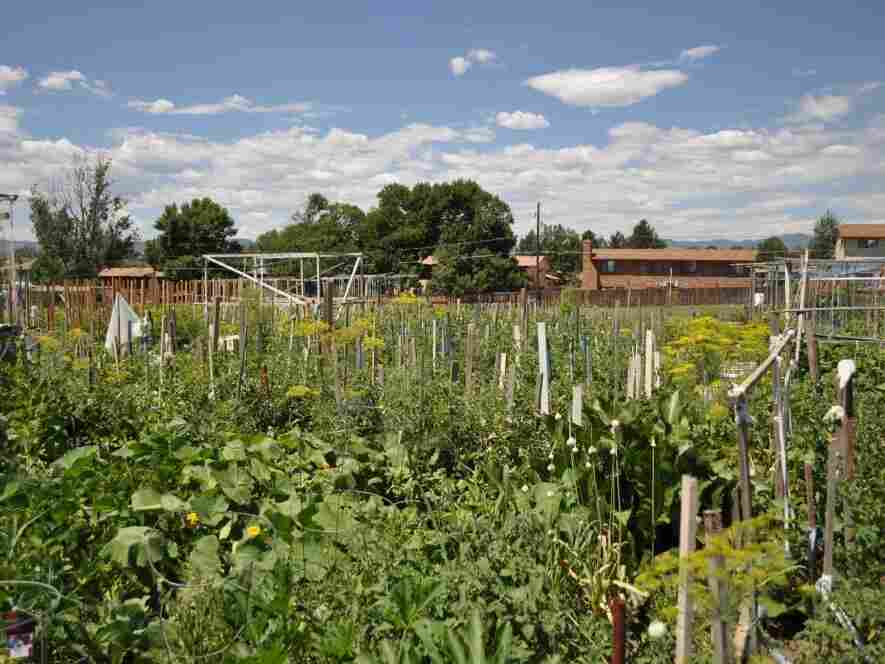 You may think that the great historic debate between communism and private property is over.

Well, it's not. Not at your local community garden.

Take, for example, the experience of Campos Community Garden in Manhattan's East Village.

Eight years ago, the garden was decrepit and abandoned. Beverly McClain walked by it all the time, on the way to her daughter's school. And one day, she and a motley group of fellow gardeners decided to revive it.

"It was neighborhood people; it was parents from the school; people from the project across the street who had seen it be a hellhole for way too long," she says.

After they carted in lots of fresh, clean soil, they decided that they were not going to stake out little individual garden plots. They'd work on the whole thing together.

"I liked that people could just show up and join the garden, as opposed to being on a wait list," says McClain.

"It's just really hard when you've got a whole lot of stuff going on and only one or two people have shown up [at the garden], and they're expected to take care of everything," says McClain. "In August, when it's really hot out, it's just kind of hard."

So last year, the Campos Community Garden laid out some boundaries of personal responsibility: Individual plots where people get to plant and pick their very own vegetables. McClain says she has to admit that it's helped.

Of course, if you're an economist like Russell Roberts at George Mason University, you can say that this was completely predictable.

And even if you just talk to veteran community gardeners, many of them will warn you away from communal arrangements.

"Our experience is, it's an unequal participation, and an unequal sharing," says Judy Elliott, who's the Education and Community Empowerment Coordinator for Denver Urban Gardens. And Ryan Mitchell, with Friendship Gardens in Charlotte, N.C., says he has often seen how "when people realize that they have to do a lot of hard labor in the middle of the summer when it's hot and humid, about half the group just drops off." The rest then feel overworked, resentful, and discouraged. Some of them may then leave, too.

So in Denver, Charlotte and across the country, in fact, most community gardens are divided up into individual plots. It means less drama and less discouragement. If some of your neighbors start shirking their responsibilities, it's not really your problem.

And still, the debate continues. Because there are still a lot of people doing communal-style gardens. And they say it may be true that the most troublesome part of a community garden is the community. Yet if you can pull it off, the community that forms around a garden is, in fact, far more valuable than the vegetables.

In Detroit, 400 or 500 new community gardens have started over the past 10 years. Almost all of them are communal. Ashley Atkinson, director of Urban Agriculture and Open Space for a nonprofit called The Greening of Detroit, says people meet their neighbors at the gardens. "That's really, really, beneficial in a city like Detroit, where neighbors are more and more isolated, as crime goes up and people feel less safe. It's important for people to be outside getting to know each other, particularly elders and young people," she says.

Right outside Detroit, meanwhile, in the city of Grosse Pointe Park, Betsy Fortuna helped start two gardens called Grayton Gardens and Backyard Community Garden, where everyone works together and all the members can pick vegetables pretty much whenever they want.

Despite all the annoyances of community — "You know. It brings up a lot of almost childhood stuff — you know, 'He took more than me!' " — Fortuna says it's completely worth it: "It really was a blighted corner, and now there's action there, there's neighbors helping neighbors, people getting each other jobs, and all kinds of good things."

Just knowing everybody, she says — knowing that if she needs something she can go ask anybody on the street: It changes everything.