Accessibility links
Europe's Mixed Record On Animal Antibiotics : The Salt Yesterday, a federal judge ordered the U.S. Food and Drug Administration to proceed with a 1977 plan to outlaw the use of certain antibiotics as growth promotion drugs for livestock. American farmers are unsure about how this could impact their industry, but there's a real-world example that provides some answers: Europe, and specifically Denmark. 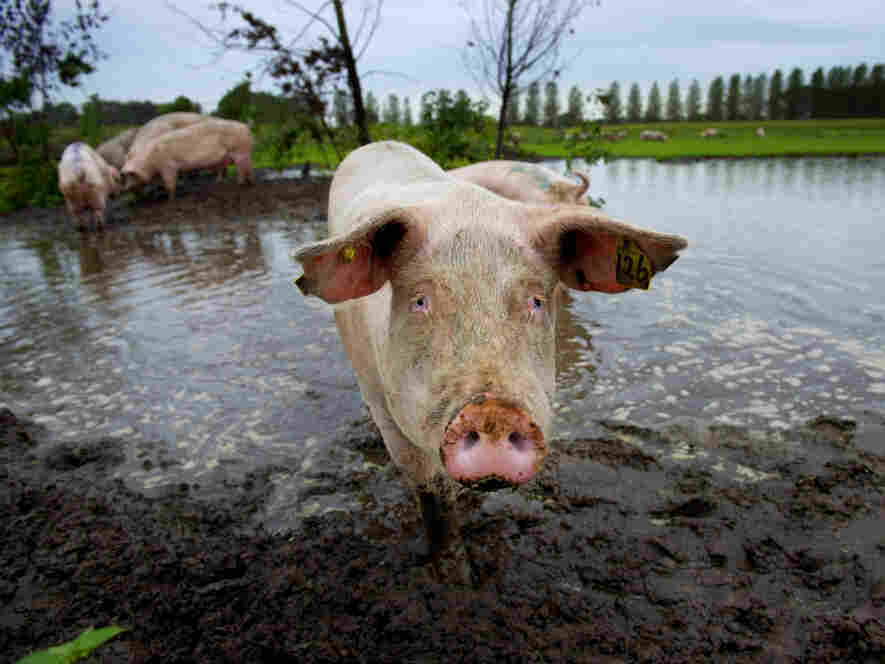 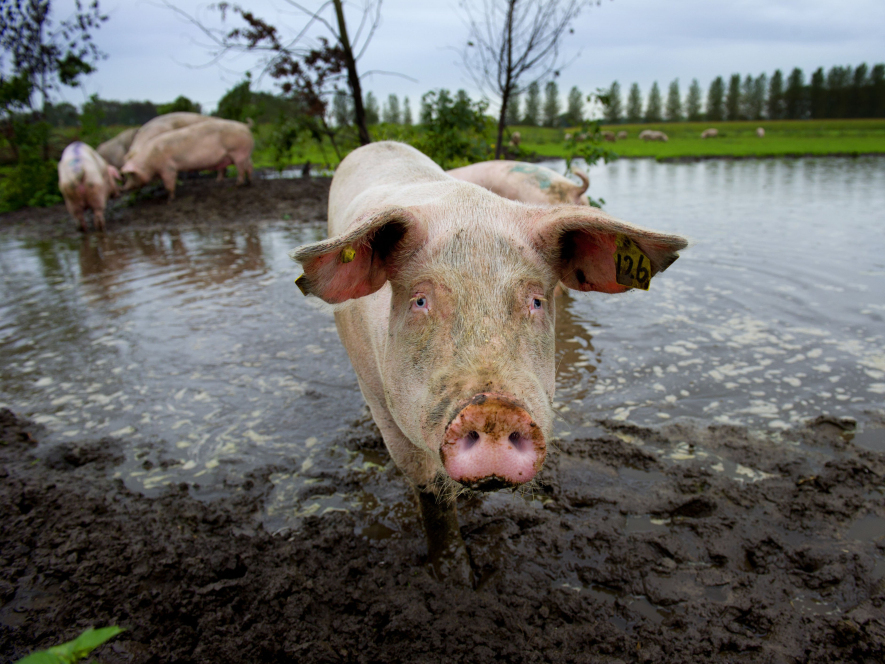 Pigs take a mud bath at the De Jofrahoeve pig farm in Esch, Netherlands. Dutch farmers treat their animals with almost three times the antibiotics that their Danish neighbors use.

If Danish pigs can live with fewer antibiotics, why can't their American cousins?

It's a hot topic, especially today. Yesterday, a federal judge ordered the U.S. Food and Drug Administration to proceed with a 1977 plan to outlaw the use of certain antibiotics as growth promotion drugs.

A coalition of public health and environmental groups called it "a great victory for public health." Those groups say that reckless use of antibiotics by beef, pork, and chicken producers — including use of the drugs to make animals grow faster — is promoting the emergence of dangerous antibiotic-resistant strains of salmonella and E. coli bacteria.

The FDA, for its part, says it also wants to reduce the use of antibiotics in animal agriculture, but it wants to use voluntary "guidance" to industry, rather than a formal ban. In fact, it planned to release its final guidance on the subject this week, but has yet to do so. A draft version of this guidance document was released in 2010.

But beyond all the legal confusion, there are some real and practical questions to explore: What would be the consequences of a ban on casual antibiotic use on the farm? How would it change farm practices?

Fortunately, there's a real-world example that provides some answers: Europe, and specifically Denmark.

In the 1990s, the Danish government took the lead in restricting use of antibiotics in animal production. It's important to understand that Denmark is not a small producer of high-priced, boutique pork. It's a pork powerhouse, with millions of pigs and hundreds of farm operations that house tens of thousands of animals.

So what happened? Fortunately, the Danish government has collected reams of data on this experiment. But depending whom you ask, you'll hear different interpretations of it.

Defenders of the Danish initiative point out (as in this presentation, which is worth a closer look) that the average use of antibiotics in Danish animals, per pound of meat produced, has been cut in half from the early 1990s. And it does not appear to have hurt the pork industry, even though pork producers in neighboring countries did not have similar restrictions. Danish pork production actually increased.

Defenders of the U.S. pork industry, however, pooh-pooh this apparent success. Take a closer look at the data, they say, and you'll see some problems.

With less prevention, Danish veterinarians were forced to rely more often on a cure. In a study that was partially funded by the National Pork Board, researchers from Iowa State University found that the use of antibiotics to treat actual disease increased significantly.

True, it never climbed anywhere close to pre-ban levels, but veterinarians also were forced to use more sensitive and valuable antibiotics. The use of third and fourth-generation cephalosporins — "what my kids get when they get strep throat ... went up by more than 300 percent," says Scott Hurd, formerly deputy undersecretary for food safety at the U.S. Department of Agriculture, now a researcher at Iowa State University.

In fact, the Danish government was so alarmed by this development that officials leaned on the industry to halt this trend. In 2010, the industry "voluntarily" put in place a two-year moratorium on the use of these specific antibiotics.

The European Union banned use of antibiotics for growth promotion, but not for disease prevention, in 2006. In the Netherlands — the EU member that has released the most detailed data on what happened — the measure had very little impact at first. Pork producers used just as many antibiotics as before the ban. In the past couple of years, though, after the government applied increased pressure, antibiotic use has started to drop.

Yet Dutch farmers still treat their animals with many more antibiotics — almost three times more, in fact — than their Danish neighbors.

The Danish secret? According to Gail Hansen, from the Pew Health Group, the Danes realized that they had to change their farming practices. They weaned their pigs later, reduced the density of their animals, changed the airflow to minimize disease transmission, and looked for animal breeds that seemed better able to withstand diseases. According to Iowa State's Hurd, those changes did increase their costs.

So how does U.S. antibiotic use compare with these countries? The short answer is: No one knows, exactly. The FDA does publish data on overall use of antibiotics in farm animals, but those figures can't be directly compared with the Danish data because they aren't broken out by the specific animals concerned.

Even a back-of-the-envelope calculation, however, makes it obvious that agricultural use of antibiotics in the U.S. is far higher than in Denmark. It may, however, be comparable to current use in the Netherlands.