Accessibility links
Shad Are Angling To Once Again Be The Tasty Harbinger Of Spring : The Salt For centuries, the shad run signaled that spring had arrived. But pollution, dams and overfishing decimated the once-mighty American shad. Now young chefs are working to rekindle a taste for this seasonal, local treat. 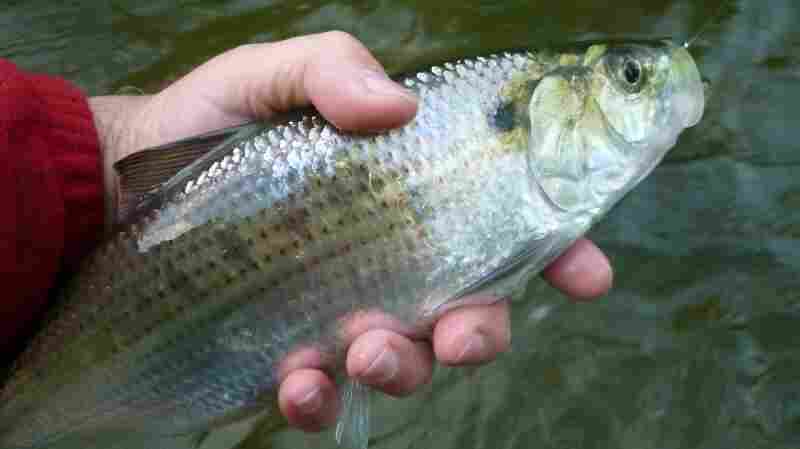 This hickory shad is fun to catch, but its cousin the American shad is the tastiest. iStockphoto.com hide caption 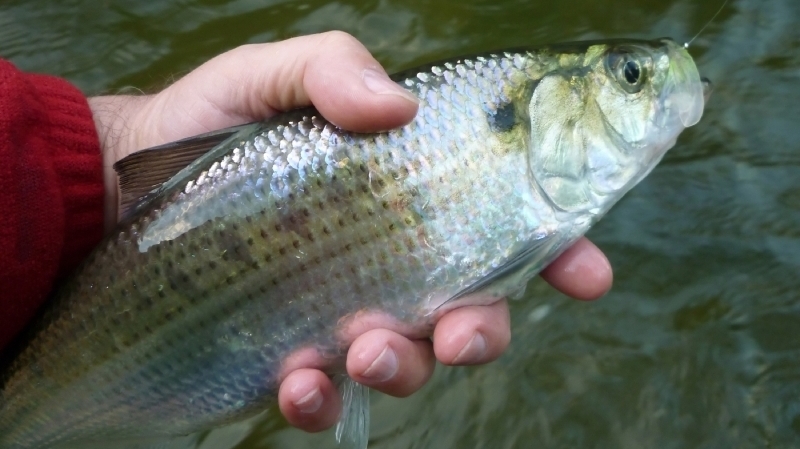 This hickory shad is fun to catch, but its cousin the American shad is the tastiest.

For most of American history, early spring meant a feast of shad. That tradition has faded, but young chefs are trying to slip the ritual back onto plates.

The earliest Americans from from Florida to Nova Scotia caught shad by the basketful as they swam back from the sea to spawn in their home rivers. The fresh, silvery fish was most certainly a delight after winter's dreary fare. The American shad's Latin name is clue to its allure: Alosa sapadissima, or most delicious herring.

American shad were a key food source for American Indians and later, colonists. New Yorker writer John McPhee called shad the "founding fish" because it fed so many key figures in American history, from William Penn to Abraham Lincoln.

After his presidency, George Washington made a good income from selling shad netted from the Potomac River at Mount Vernon. In 1772, he caught upwards of 1 million shad and herring, according to a charming account of shad's American history by CleanFish founder Dale Sims. Civil War soldiers had rations of shad. And even now, a shad planking is a ritual meal for Virginia politicians. 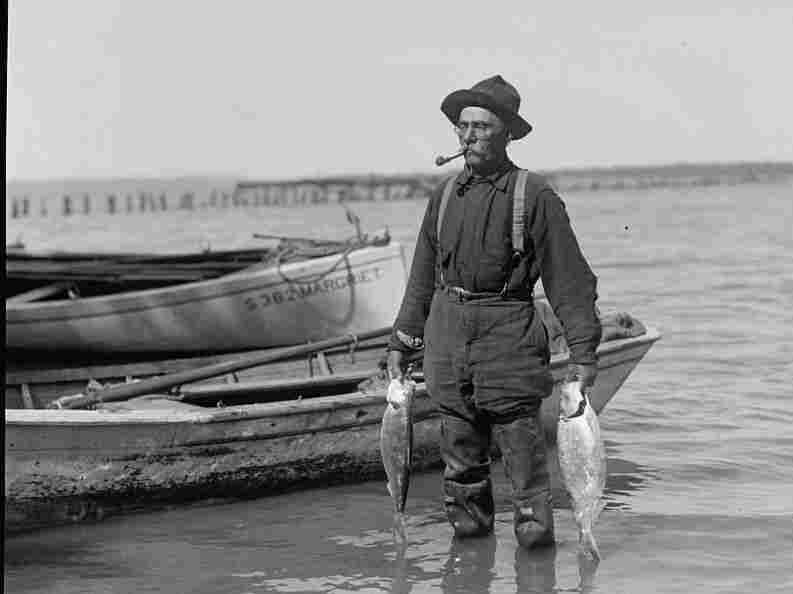 A fisherman pulls shad from the Potomac River in the early 1900s. Library of Congress hide caption 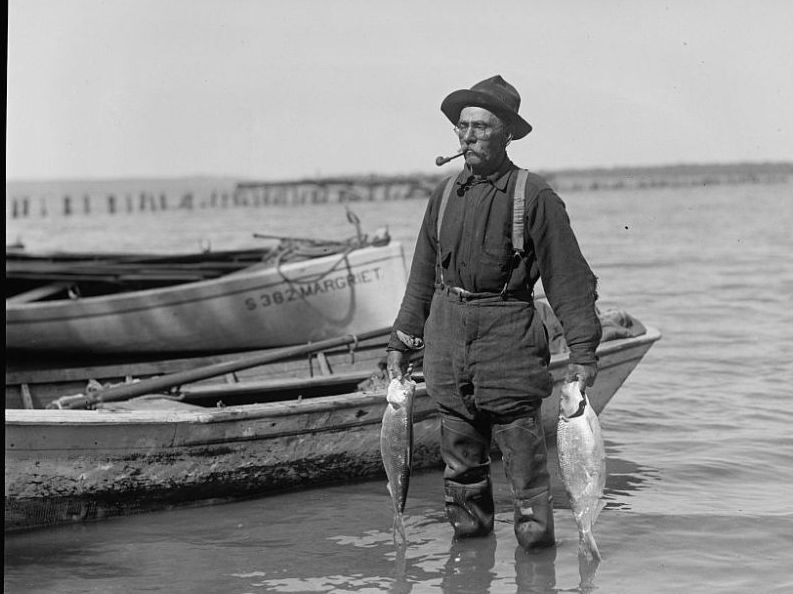 A fisherman pulls shad from the Potomac River in the early 1900s.

There are shad on the West Coast, too, most notably in the Columbia River. But they're mere interlopers from the East Coast, having been transplanted there in the 1880s.

In its native rivers, the noble American shad fell on hard times starting in the late 1800s, with overfishing, pollution and dams reducing its numbers to the point where the tradition of shad as the must-have dish for spring had largely faded from memory.

But young chefs are now angling to restore the shad to its former glory. "Since the beginning of people inhabiting this area, there was always shad the first thing in spring, the first guarantee of fresh fish," says Jed Fox, a chef at Ris restaurant in Washington, D.C. Some of those fish would have spawned in Rock Creek, just a few blocks from the restaurant.

It's yummy, and it's local, but is it sustainable? That's a good question.

Many shad fisheries are closed to give the population a chance to rebuild. The Monterey Bay Aquarium Seafood Watch recommends that people avoid eating shad because of that.

But Georgia and South Carolina already have approved plans in place for sustainable commercial shad fishing, and North Carolina has applied for approval.

East Coast shad are managed by the Atlantic States Marine Fisheries Commission, which requires states to have a sustainable fishery plan for American shad in place by Jan. 1, 2013, if they want to continue recreational or commercial fishing. "We recognize the importance of continuing the fishery and keeping the history and knowledge of American shad going," says Kate Taylor, coordinator for the commission's shad plan.

Most shad sold in restaurants and stores this spring probably comes from Southeastern states with sustainable stocks, Taylor says. This year, she says, people should ask where the fish was caught. Next year you won't have to ask; all shad on the market will have to be harvested sustainably. "Shad is a great fish to eat, it's very healthy for you, and you're supporting a local fishery that's sustainable."

Shad, a large member of the herring family, are famously bony fish. Cooks get around that by baking the fish to soften the bones. But for most people, the real prize is the shad roe.

These eggs are delicate, and they're best in a sauté of butter. This week Fox is topping them with a sweet and sour bacon sauce and a side of sautéed bitter greens to offset the sweetness. Roe is a bit of an acquired taste, he acknowledges, with "a liver-esque, innards kind of flavor. But it's a very smooth and rich flavor."

Other restaurants make shad and shad roe a spring tradition. If you were lucky enough to be at the Grand Central Oyster Bar in New York City today, you could dine on a shad filet and shad roe combo, served with the traditional bacon, for $29.95.

Fishmongers who weren't born yesterday say they've seen American shad journey from being a must-have seasonal item to something that only older people remembered to order. But Stanley Pearlman, for one, is glad to see shad coming back. "It's had a rekindled interest with the younger chefs looking for a product with history," says Pearlman, president of NAFCO, a seafood wholesaler in Jessup, Md. "It's rediscovering something that was lost."

Home cooks thinking to tackle roe should proceed with caution, Pearlman says. "You have to sauté it perfectly. If it's overcooked the grains become a little sandy. If it's done the right way, it's definitely a good thing to eat."

No shad near you? Maybe there's some mullet roe waiting to brighten your spring. Check out this video with Daniel Klein, a chef and filmmaker who writes the Perennial Plate blog. He set out earlier this month to net a mullet off Anna Maria Island, Florida. Fresh-caught raw mullet roe gets a big thumbs up.