Accessibility links
Does A Chocolate Habit Help Keep You Lean? : The Salt New research suggests that frequent chocolate consumption may favorably influence metabolism. It adds to the growing evidence that our bodies may not treat all calories the same way. 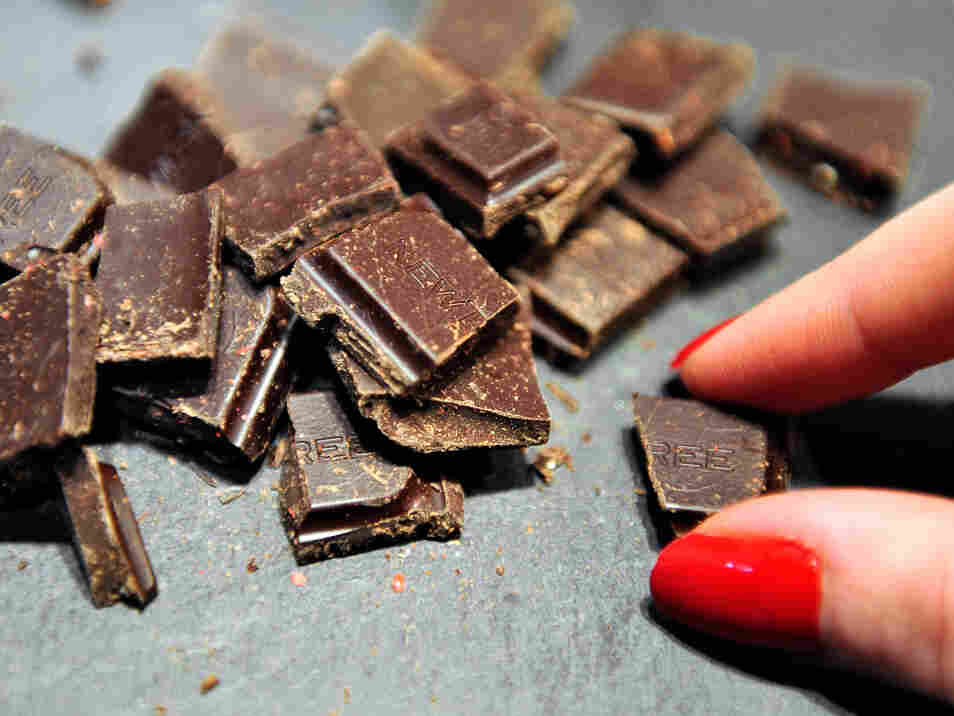 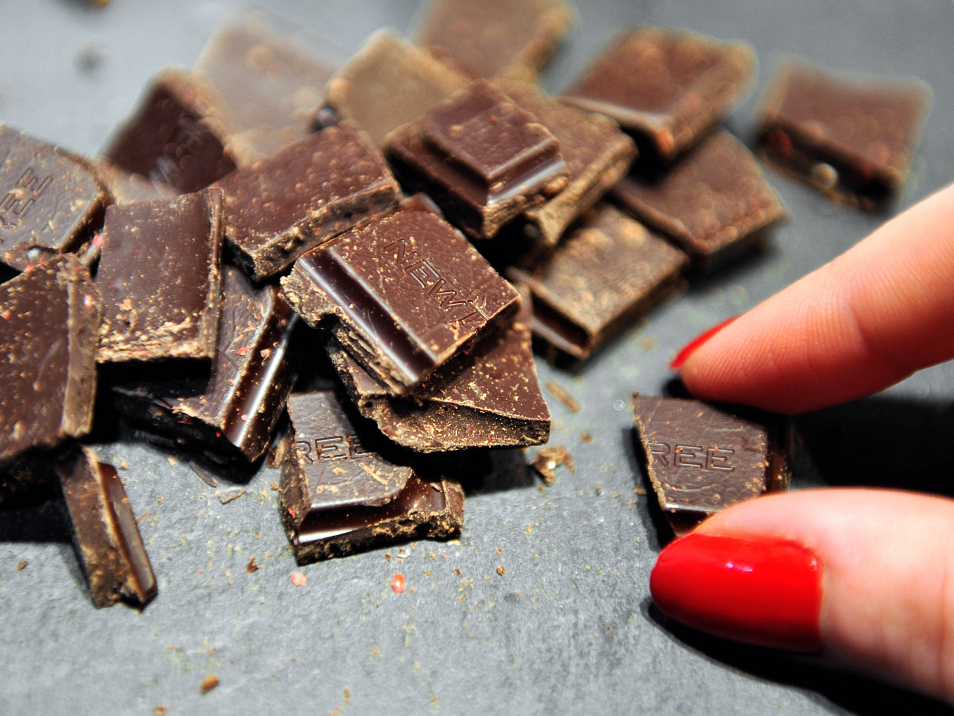 Researchers say some compounds in cocoa may help us fend off fat.

Really, we asked? Last time we checked chocolate was loaded with fat and sugar. But this new research, along with some prior studies, suggests chocolate may favorably influence metabolism.

To test this theory, Beatrice Golomb, an associate professor of medicine at the University of California, San Diego, asked about 1,000 people, ages 20 to 85, a simple question: "How many times a week do you consume chocolate?" The participants then completed food frequency questionnaires to estimate their caloric intakes of a whole range of foods including chocolate. They also had weight and height measurement taken to calculate their body mass index, or BMI.

"In our study, people who ate chocolate more often actually ate more calories," says Golomb. "But in spite of that they had lower [BMI]."

How much lower? For a 5-foot-tall woman, weighing about 120 pounds, the study found that she was likely to be about 5 pounds lighter if she was a frequent eater of chocolate (five times a week).

And, no, the people with serious chocolate habits did not exercise more than those who weren't in the habit of eating chocolate.

"So exercise was not an explanation for the finding," says Golomb.

This study certainly does not prove that frequent chocolate consumption causes people to be leaner: The researchers found that chocolate's correlation to thinness started to melt away among the participants who consumed the most. They also didn't suss out whether the type of chocolate — white, milk, or dark, which can have varying amounts of cocoa — made a difference.

But what's fascinating here is the notion that our bodies may not treat all calories the same way.

"I think a really important point is that it isn't just the number of calories that matter," says Golomb. But the composition of calories seems to matter, too.

Not all researchers are convinced of this. Broadly speaking, the "calories in, calories out" method of managing weight is effective for most people.

And it's possible that overweight participants in the study under-reported their their chocolate consumption, according to Jane Wardle of the University College London. Indeed, a lot of researchers agree that self-reported food data can be flawed. (Editor's note: This was added Tuesday 12:20 p.m. ET.)

But what research shows is that certain foods contain compounds that have some power to positively influence metabolic factors.

When he investigated some specific polyphenols found in cocoa, he found that they potently inhibit an enzyme, called pancreatic lipase, that's responsible for digesting dietary fat.

This means that the fat in chocolate may exit our bodies before it has a chance to be absorbed. Or, in other words, these compounds in cocoa may help us fend off fat.

Lambert's studies have been conducted in test tubes and mice, not in people. "So there's a big leap from what we're doing to what the [UC San Diego researchers] are doing."

But it might be one mechanism that explains why frequent chocolate eaters tend to be leaner.

Another possible mechanism is that the compounds in chocolate may increase the energy that cells make. Researchers are studying this as well.

So, for now, if you're a chocolate lover, lose the guilt. Or, be reassured, for now, that the associations between eating chocolate and body weight move in the preferred direction.

And one more thing: This study was not funded by the chocolate industry. Funding came from the National Institute of Health; the National Heart, Lung, and Blood Institute; and the UC San Diego General Clinical Research Center.