Accessibility links
Studies Show Why Insecticides Are Bad News For Bees : The Salt Two new studies, published in the prestigious journal Science, suggest that one class of insecticides poses a more serious threat to bees than government regulators realized. 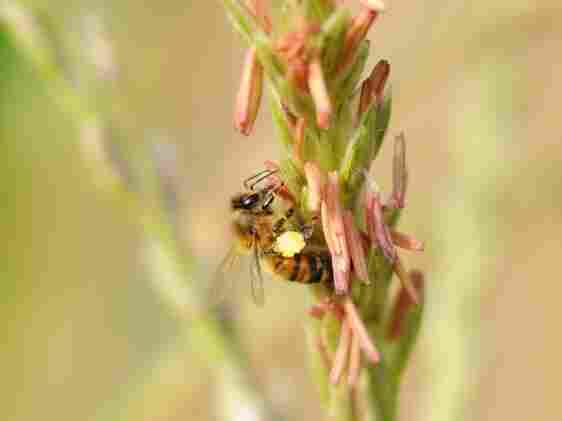 One class of insecticides makes an entire corn plant poisonous to many insects that feed on it, including bees. iStockphoto.com hide caption 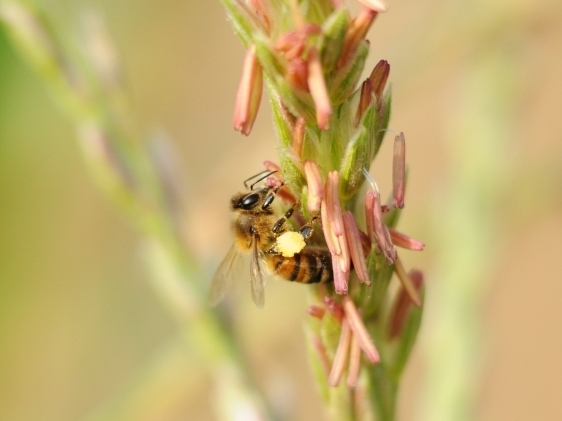 One class of insecticides makes an entire corn plant poisonous to many insects that feed on it, including bees.

The search for the killer of America's bees is a little bit like an Agatha Christie novel. Suspicion has turned toward one shady character and then another: declining habitat; parasites; diseases; pesticides.

Or did they all conspire in the recent mass murder of the country's bees?

Today, two new studies are turning the spotlight of suspicion toward a specific class of insecticides called neonicotinoids. It's becoming increasingly clear that these chemicals are present — although at low levels — across huge parts of American farmland. And they may be addling the brains of our bees.

These chemicals came on the market in the late 1990s, and about a decade ago became popular as insect-killing coatings on seeds. Today, most of the corn seed (also canola and sunflower seed) in the country is covered with these insecticides before those seeds are planted. The biggest manufacturer of the pesticides is Bayer CropScience, based in Germany.

The chemicals then are absorbed by the growing corn or canola plant and transported throughout its roots, leaves, and even its nectar and pollen. This makes the entire plant poisonous to lots of insects that feed on it, from root-gnawing worms to sap-sucking aphids.

Did you catch that? About nectar and pollen? That's what bees eat. And it takes only a small amount of these insecticides to kill a bee.

All this, in fact, was already known when the U.S. Environmental Protection Agency (and comparable government agencies in Europe) approved these insecticides. But government regulators, relying in part on studies carried out by Bayer CropScience, came to the conclusion that bees would be exposed to only tiny amounts of the pesticide, well below what's necessary to kill them. (An internal EPA critique of one of these studies was leaked and publicized by the activist group Pesticide Action Network in 2010.)

Three new studies, conducted in Indiana, the United Kingdom, and France, now are challenging this belief.

The first blow came in January, from researchers at Purdue University who reported in the journal PLoS ONE that when insecticide-coated corn seed goes into the ground, farmers' planting equipment releases a small cloud of dust containing neonicotinoid. The researchers were startled to discover that this "planter exhaust" contained a potent dose — easily enough to kill a bee. The Purdue researchers also found that bees often gathered corn pollen — contrary to a common assumption that corn's pollen is unappetizing to bees.

Today, there are two new studies, published in the prestigious journal Science. And both of them, although limited to laboratory observations, suggest that these insecticides pose a more serious threat to bees than government regulators realized.

In the first study, researchers at the University of Stirling, in the United Kingdom, exposed bumblebees to low, "field-realistic" levels of a neonicotinoid insecticide called imidacloprid. The bumblebees didn't die, but in a remarkable and unexpected development, they almost stopped making new queen bees.

In the second study, carried out in France, honeybees that were exposed to another nicotinoid seemed less able to navigate, and many never found their way back to their home hive. This study, however, exposed the bees to higher levels of pesticide, probably higher than most bees encounter in the real world.

Together, the studies show that when bees are exposed to levels of these insecticides that aren't enough to kill them, they're still harmed in ways that can endanger the survival of their colonies. The neonicotinoids appear to be "so toxic to bees, really the only safe number is zero," says Christian Krupke, one of the authors of the Purdue study.

In its response to to the new studies, released today, Bayer CropScience called the results "artificially generated." The company said that the bees were exposed to higher levels of the pesticide than would be typical in the field, and that previous studies had found no harm to bees.

Jeffery Pettis, who leads bee research at the U.S. Department of Agriculture, says the new research shows clearly that pesticides can harm bees without killing them. But he also says that mandating zero risk to bees also may not be a good idea. Instead, Pettis says, the government may need to come up with ways to "limit the damage" to bees, perhaps by limiting the number of crops on which the insecticide can be used.