Accessibility links
Is That A Crushed Bug In Your Frothy Starbucks Drink? : The Salt Cochineal is a red dye made from a crushed insect native to Latin America. Some vegetarians are distressed that Starbucks uses the dye in some of its pink-colored food and beverages.

Is That A Crushed Bug In Your Frothy Starbucks Drink?

Is That A Crushed Bug In Your Frothy Starbucks Drink? 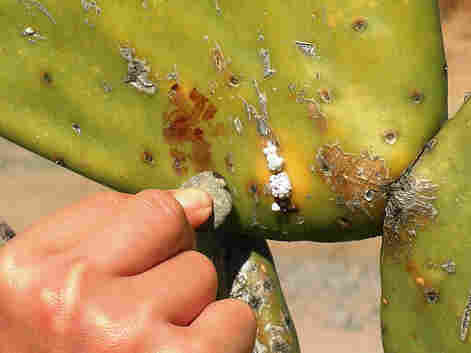 The tiny white insects that feed on cactus turn into red cochineal when crushed. Starbucks uses the dye in some of its products. Flickr via Wikimedia Commons hide caption 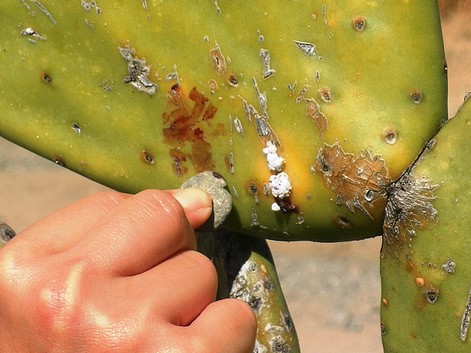 The tiny white insects that feed on cactus turn into red cochineal when crushed. Starbucks uses the dye in some of its products.

Call it the tempest in the Frappuccino. Some Starbucks patrons have been distressed to learn that the chain's Strawberry and Creme Frappuccino owes its pink coloring to crushed insects.

The coloring in question, cochineal, is made from a tiny white insect, Dactylopius coccus. When crushed, its body exudes a brilliant red color. Cochineal has been used as a coloring for foods and makeup for centuries.

It's all natural. It's approved by the U.S. Food and Drug Administration. Eating insects is newly trendy in San Francisco and Los Angeles. And, as NPR's Martin Kaste has reported, cochineal is gathered off cactus by poor people in Peru, who use their earnings to feed their families and send their children to school.

So what's not to like? A lot, apparently, if you're a vegetarian.

A website, ThisDishIsVegetarian.com, reported on March 14 on the chain's use of cochineal in strawberry Frappuccinos. Evidently a distressed barista sent a photo of the strawberry flavoring's label, which listed cochineal. 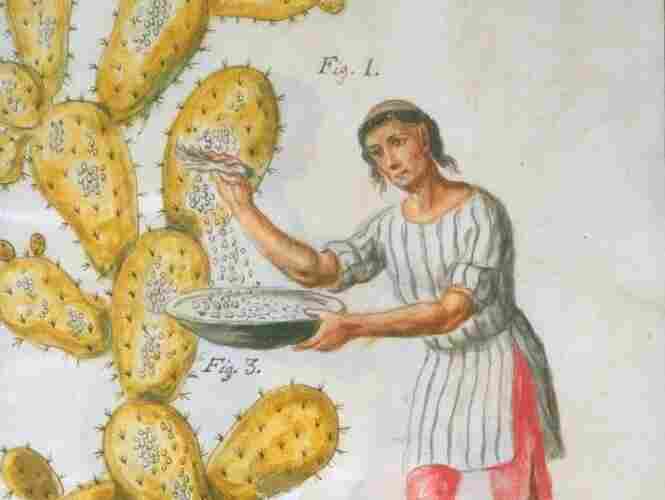 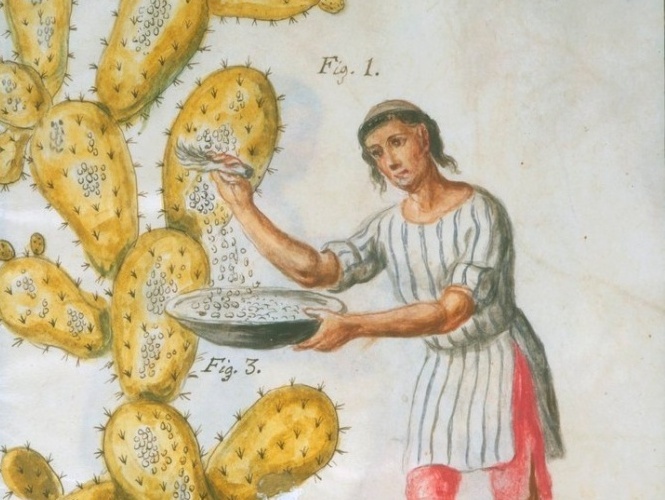 Since then the news has bounced around the Internet, sparking a change.org petition asking the latte behemoth to "stop using bugs in your strawberry-flavored drinks."

In an email to The Salt, Starbucks confirmed that cochineal is also used to color its strawberry smoothies, and three food items: the birthday cake pop, mini donut with pink icing, and red velvet whoopee pie. "Cochineal extract is a commonly used ingredient and is a natural, FDA-approved colorant found in a wide variety of food and beverage products in the U.S.," a Starbucks spokesperson wrote.

After first defending its use of cochineal as a natural product, Starbucks is having second thoughts. Yesterday, Starbucks president Cliff Burrows announced that the company is reconsidering the use of cochineal. "While it is a safe product that poses no health risk, we are reviewing alternative natural ingredients," Burrows wrote on the corporate blog.

Actually, there is a health risk to cochineal. It can cause allergies and asthma in some people, and the reaction can be severe. So in 2009, the FDA started requiring that foods and cosmetics containing cochineal and carmine, another name for food coloring made from scale insects, put that on the label.

Natural alternatives include beet extract, but it tends to fade with time. Cochineal's rosy hue does not. But it may be fading from the roster of natural coloring alternatives.