Accessibility links
Lust, Lies And Empire: The Fishy Tale Behind Eating Fish On Friday : The Salt An old myth holds that Catholics eat fish on Fridays because of a secret pact a medieval pope made to sell more fish. That's just a fish tale. The real story behind fish Fridays is way better. 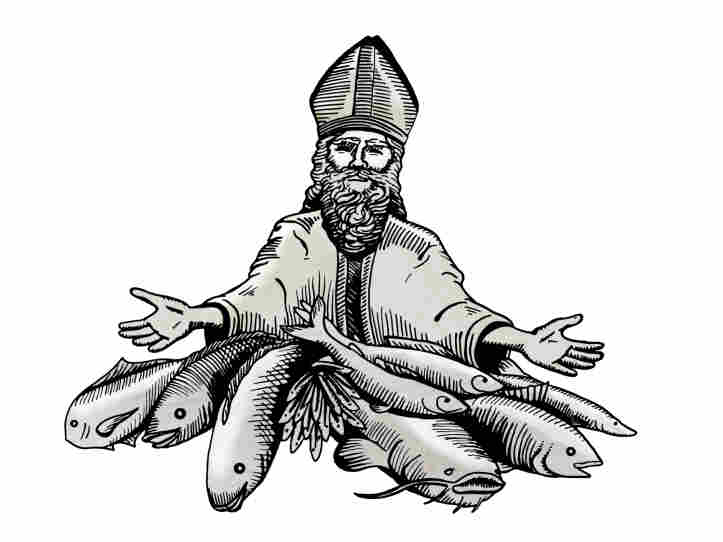 Did the pope really make a secret pact to sell more fish? No, but the real story of eating fish on Fridays is much more fantastical. Adam Cole/NPR hide caption 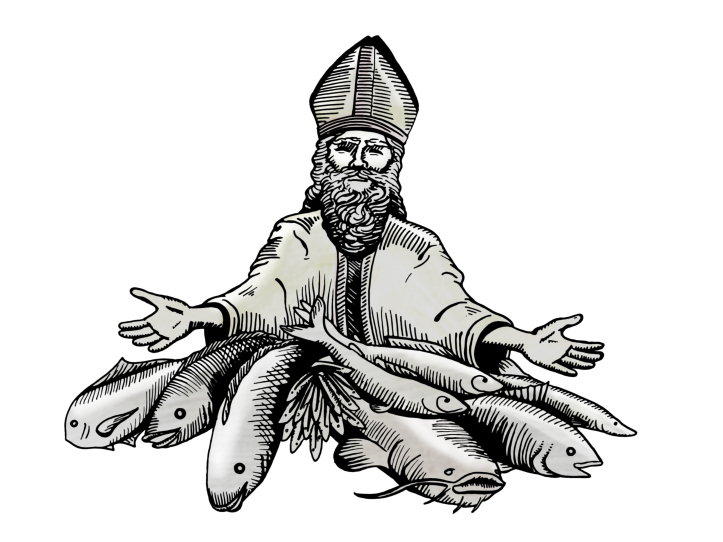 Did the pope really make a secret pact to sell more fish? No, but the real story of eating fish on Fridays is much more fantastical.

It sounds like the plot of a Dan Brown thriller: A powerful medieval pope makes a secret pact to prop up the fishing industry that ultimately alters global economics. The result: Millions of Catholics around the world end up eating fish on Fridays as part of a religious observance.

This "realpolitik" explanation of why Catholics eat fish on Friday has circulated for so long, many people grew up believing it as fact. Some, myself included, even learned it in Catholic school. It's a humdinger of a tale — the kind conspiracy theorists can really sink their teeth into. But is it true?

"Many people have searched the Vatican archives on this, but they have found nothing," says Brian Fagan, a professor emeritus of archaeology at the University of California, Santa Barbara, whose book, Fish On Friday, explores the impact of this practice on Western culture.

The real economic story behind fish on Fridays turns out to be much better.

Let's start with a quick lesson in theology: According to Christian teaching, Jesus died on a Friday, and his death redeemed a sinful world. People have written of fasting on Friday to commemorate this sacrifice as early as the first century.

Technically, it's the flesh of warmblooded animals that's off limits — an animal "that, in a sense, sacrificed its life for us, if you will," explains Michael Foley, an associate professor at Baylor University and author of Why Do Catholics Eat Fish On Friday?

Fish are coldblooded, so they're considered fair game. "If you were inclined to eat a reptile on Friday," Foley tells The Salt, "you could do that, too."

Alas, Christendom never really developed a hankering for snake. But fish — well, they'd been associated with sacred holidays even in pre-Christian times. And as the number of meatless days piled up on the medieval Christian calendar — not just Fridays but Wednesdays and Saturdays, Advent and Lent, and other holy days — the hunger for fish grew. Indeed, fish fasting days became central to the growth of the global fishing industry. But not because of a pope and his secret pact.

At first, says Fagan, Christians' religious appetite was largely met with herring, a fish that was plentiful but dry and tasteless when smoked or salted. And preservation was a must in medieval times: There was no good way for fresh fish to reach the devout masses. Eventually, cod became all the rage — it tasted better when cured and it lasted longer, too.

The Vikings were ace at preserving cod — they "used dried and salted cod as a form of beef jerky on their ocean passages," Fagan says. And the route the Vikings took at the end of the first millennium — Greenland, Iceland, Newfoundland — matches up with the natural range of the Atlantic cod.

It's possible that others may have followed the cod trail to Canada before Columbus sailed the ocean blue. Clues suggest that English fishermen from Bristol may have made the voyage by around 1480 but kept mum on the location lest the competition rush in. By some accounts, both Columbus and John Cabot had heard of these adventures when they set off on their own epic journeys west.

"Why do people go over the horizon?" Fagan says. "In the case of the North Atlantic after the Norse ... they went looking for cod" to satiate the demands of the faithful.

So that's the empire part of our saga. Funny enough, while the pope story is a fish tale, an official leader of a church did make fish fasting the law for purely practical reasons. For that story — and the lust our headline promised — we turn to a monarch known for his carnal cravings: Henry VIII.

But after Henry became smitten with Anne Boleyn, English fish-eating took a nosedive.

You see, Henry was desperate with desire for Anne — but Anne wanted a wedding ring. The problem was, Henry already had a wife, Catherine of Aragon, and the pope refused to annul that decades' long marriage. So Henry broke off from the Roman Catholic Church, declared himself the head of the Church of England and divorced Catherine so he could marry Anne.

Suddenly, eating fish became political. Fish was seen as a " 'popish flesh' that lost favour as fast as Anglicism took root," as Kate Colquhoun recounts in her book Taste: The Story of Britain Through Its Cooking.

Fishermen were hurting. So much so that when Henry's young son, Edward VI, took over in 1547, fast days were reinstated by law — "for worldly and civil policy, to spare flesh, and use fish, for the benefit of the commonwealth, where many be fishers, and use the trade of living."

As one economic analysis noted, U.S. fish prices plummeted soon after Pope Paul VI loosened fasting rules in the 1960s. The Friday meat ban, by the way, still applies to the 40 days of the Lenten fast.

A few years before the Vatican relaxed the rules, Lou Groen, an enterprising McDonald's franchise owner in a largely Catholic part of Cincinnati, found himself struggling to sell burgers on Fridays. His solution? The Filet-O-Fish.

While not exactly the miracle of loaves and fishes, Groen's little battered sandwich has fed millions around the world.