Fast Food Chains In Cafeterias Put Hospitals In A Bind

Fast Food Chains In Cafeterias Put Hospitals In A Bind 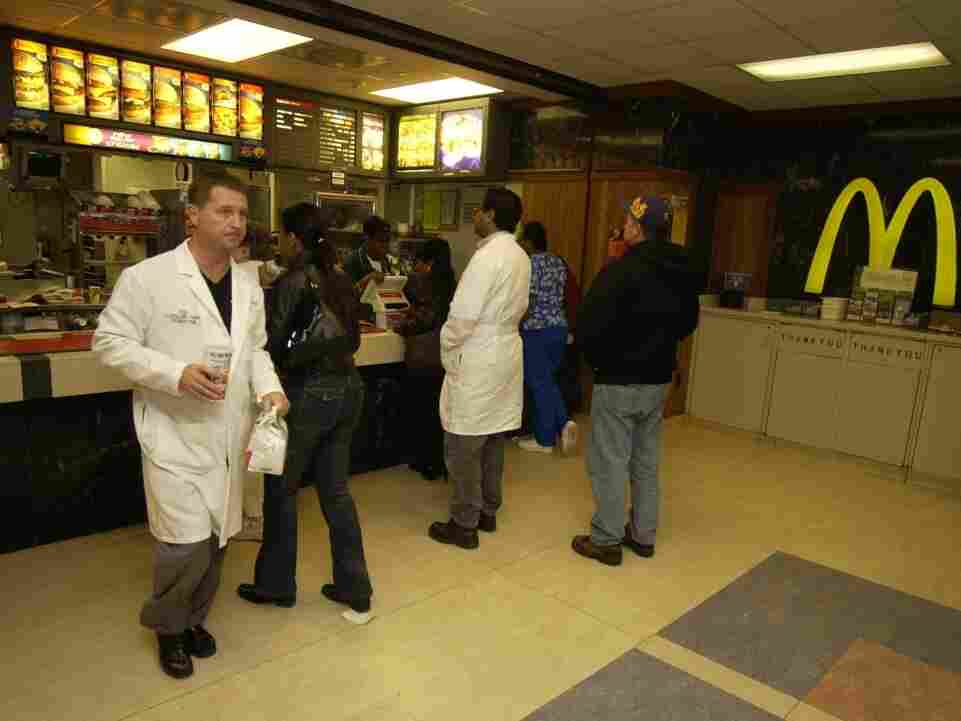 The McDonald's inside the Cleveland Clinic, 2004, in Cleveland. Tony Dejak/AP hide caption 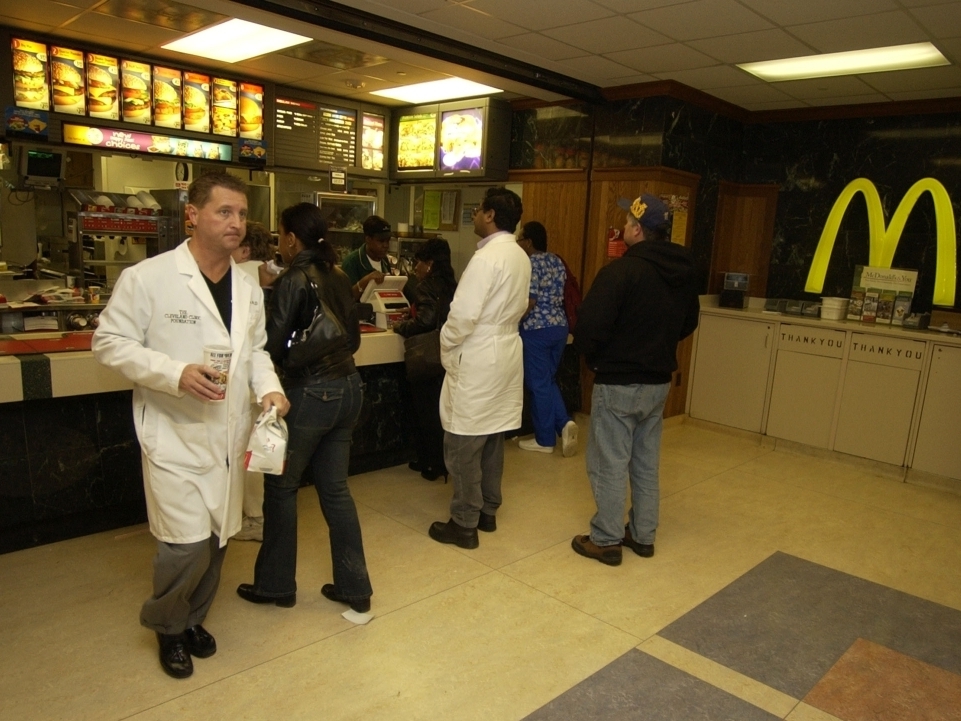 The McDonald's inside the Cleveland Clinic, 2004, in Cleveland.

On one side of a wall inside the Truman Medical Center cafeteria in Kansas City, Missouri, the menu features low-calorie, low-fat and low-sodium meals. On the other side of the wall is a McDonald's, featuring hamburgers and french fries.

The pairing is a sore point for hospital CEO John Bluford who, as chair last year of the American Hospital Association, issued a call to action urging hospitals to eliminate unhealthy food in cafeterias as one way to create a culture of wellness. Serving fast food inside Truman Medical Centers sends "an inconsistent message" to patients, staff and the community, Bluford says.

In 1992, Truman agreed to a 25-year contract with McDonald's, at a time when the financial benefit of having a stable food service client in the hospital outweighed any potential health concerns.

But times have changed, and now other hospitals interested in replacing fast food with more healthful options may find it isn't as easy as it seems. In Ohio, the Cleveland Clinic tried in vain to terminate its contract early with McDonald's 10 years ago. At the time, the clinic's lead heart surgeon (and now hospital CEO), Delos Cosgove, proposed removing all fast food vendors.

The Pizza Hut did close. But McDonald's stayed and remains a tricky relationship for the hospital, which has since removed sugary beverages and trans fats from its campus offerings. "We're just going to live with it," Bill Barum, director of hospitality and retail services for the Cleveland Clinic, tells The Salt. "When the contract ends, we'll have the opportunity to re-examine the space.

After 34 years at the Children's Hospital of Philadelphia, McDonald's closed its doors last September. The hospital says it wanted the extra space, but it has since added back milkshakes to the menu for sick kids, according to the hospital's spokesperson, Julian Walsh.

Of the 14,000 McDonald's in the United States, the company says there are 27 in hospitals. Fast food outlets like the hamburger chain can be a convenience and a comfort for patients. The food may also appeal to some patients' picky tastes when undergoing difficult treatments.

And McDonald's says its offerings are balanced to fit any diet. "Today, we offer more variety than ever in our menu and we trust that our customers will make the appropriate choices for them, their families and lifestyles," says Danya Proud, spokesperson for McDonald's.

Some hospitals have as many as five different fast food outlets, according to the Physicians Committee for Responsible Medicine, which surveyed hospital food in 2011 at more than 100 major U.S. hospitals. The report's top five "worst hospital environments" had at least one fast food restaurant.

"In this day and age, when you would think a hospital might be proud enough, if not shamed enough, to cut or end these contracts with fast food outlets," says Susan Levin, a dietitian with PCRM.

But even as some hospitals are looking the end the contracts, others are striking up new ones. As we've reported, Chick-fil-A recently set up shop in several facilities, including the Texas Medical Center's St. Luke's Episcopal Hospital and the Medical University of South Carolina University Hospital in Charleston, S.C.

This story is part of a reporting partnership with NPR, member station KCUR, and Kaiser Health News.