Accessibility links
Indian Engineers Build A Stronger Society With School Lunch Program : The Salt The program, which is run by engineers, currently feeds 1.3 million children, making it one of the largest school lunch programs in the world. The program is so cost-effective it's become a Harvard Business School case study.

At a government-run public middle school in Bangalore, the blackboard's cracking, the textbooks are tattered and most of the students are barefoot.

But with all those challenges, the biggest obstacle that teachers face in keeping kids in school is hunger. Many students show up at school having had nothing to eat for breakfast.

On mornings one student comes to school hungry, the thought of school makes her break down, she says.

Suchitra is an unusually talented student, says her teacher, Sheelavati Shakti. She shows a strong aptitude for music and dance, and is strong academically.

But when she joined this school a year ago, Suchitra looked unhealthy, Shakti says. Her skin was discolored, but she didn't have an infection; she was just malnourished.

Suchitra's life has recently been turned around, however. An ambitious school lunch program now supplies kids at her middle school with a nutritious, freshly cooked meal. On days she comes to school hungry, she knows she can eat at school.

"After eating this food I've become stronger," Suchitra says. "That's why I'm able to come to school and study and play."

The skin discoloration disappeared after she started the lunch program, Suchitra says. But the program has done more than improve her physical health; it's allowed her to dream of a better life. She now imagines going to college to study science. And one day, she says, she hopes to become a software engineer.

The lunch program that provides meals to Suchitra's school currently feeds 1.3 million children across India, making it one of the largest school lunch programs in the world. 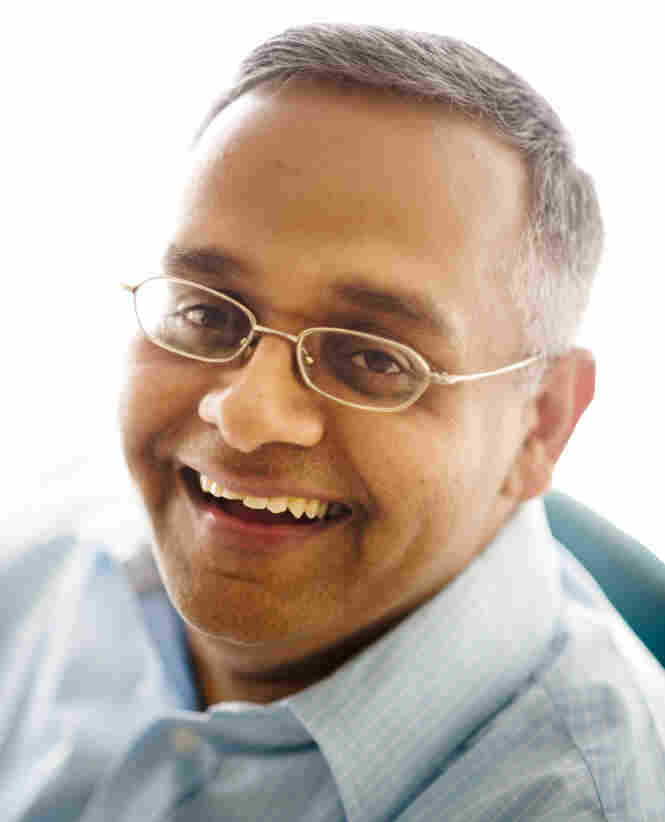 Shridhar Venkat is the director of the Akshaya Patra Foundation, which runs one of the largest school lunch programs in the world in India. Ryan Lobo for NPR hide caption 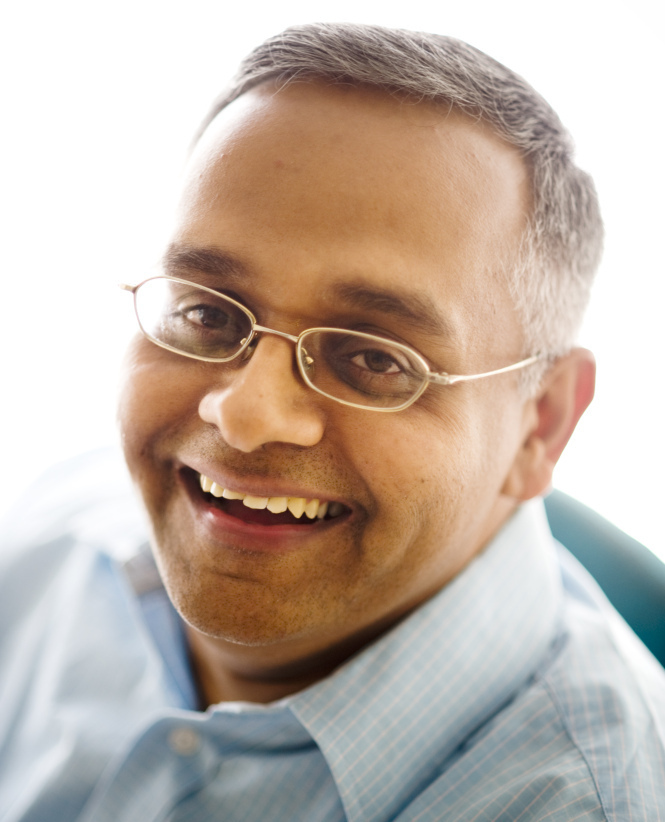 Shridhar Venkat is the director of the Akshaya Patra Foundation, which runs one of the largest school lunch programs in the world in India.

It was initially begun more than a decade ago as part of the religious outreach of a Hindu group known as ISKCON, better known in the West as the Hare Krishna movement.

The Hindu group is still actively involved in the program. But the lunch program is now operated as a secular, public-private partnership, serving poor children of all backgrounds.

Government officials supply grain and other lunch ingredients at a discount, and provide a cash subsidy. Donors from India and around the world supply the rest.

"Feeding a child is not charity," says Shridhar Venkat, who directs the lunch program through the Akshaya Patra Foundation. He used to be a corporate executive. To him, a child like Suchitra is not a hungry 13-year-old girl in poverty. She's an opportunity, and giving her lunch is an investment. Tomorrow, an educated Suchitra could produce a huge return on that investment to her community, he said.

The program prepares most of the food using centralized kitchens. Some 17,000 pounds of rice and 4,500 gallons of soup are produced by one kitchen in Bangalore. Engineers have designed the kitchen and the logistics of delivering the food to schools.

"We have never failed to deliver a meal on any day in the last 11 years," Venkat says. 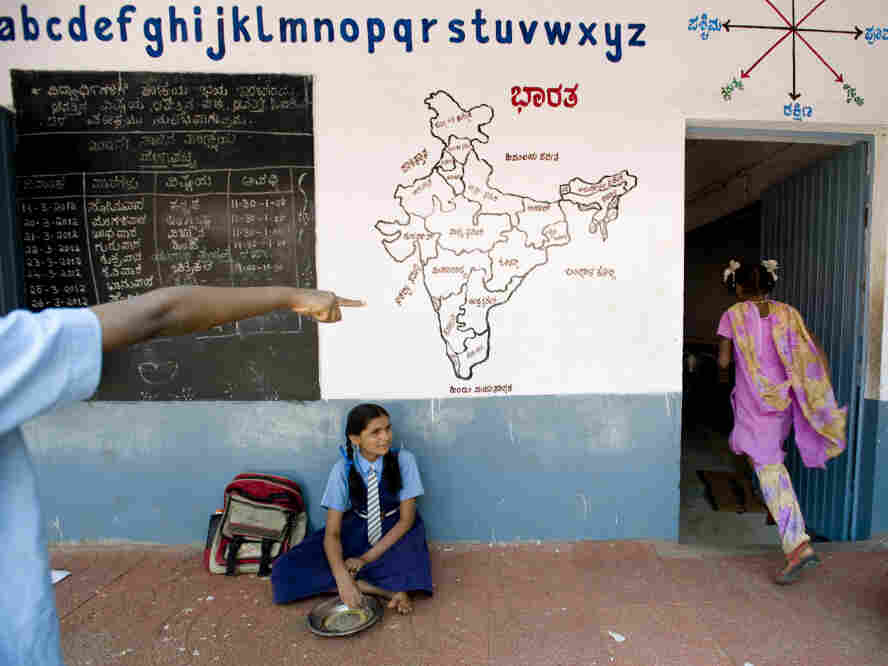 On days she comes to school hungry, K. Suchitra (center) knows she can eat at school. Ryan Lobo for NPR hide caption 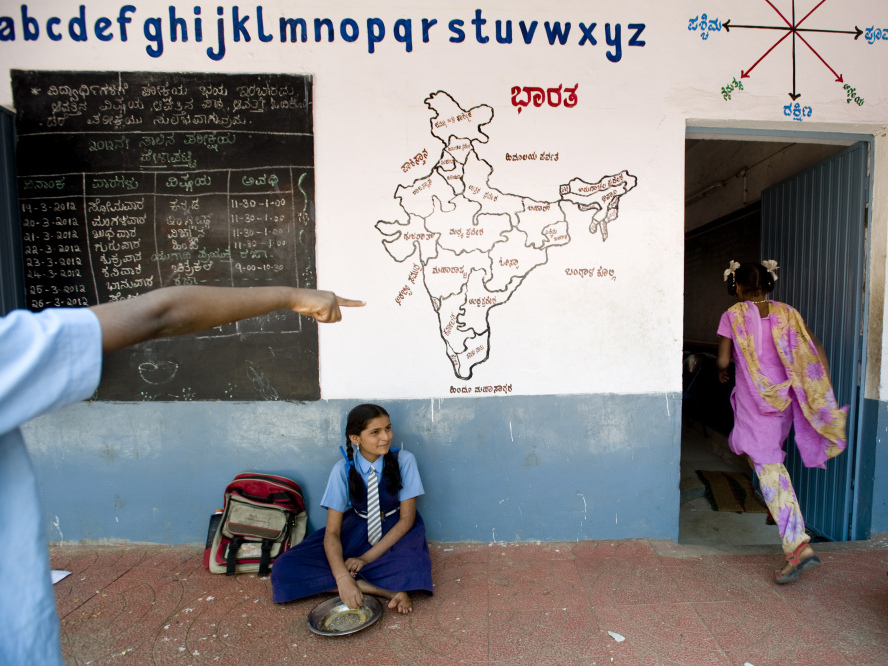 On days she comes to school hungry, K. Suchitra (center) knows she can eat at school.

The program is so cost-effective it's become a Harvard Business School case study. Today it costs only about 11 cents to place a meal before each child. By 2020, the program hopes to feed 5 million children every day.

The combination of efficiency and high purpose makes for a strange marriage: ruthlessly efficient corporate management techniques married to a goal that is deeply emotional.

"We want to do things with heart," Venkat says. "It's not just, 'build large kitchens.' All these large kitchens have a big heart."

Venkat said he was going to try to use the inducement of dessert to get kids to come to school. Typically, the children know on which day dessert is going to be included in lunch.

"We are trying to make it a secret, so they keep guessing and they come to school," he says with a laugh.

Independent audits of the program have found it's having a profound effect.

But besides the statistics, Venkat says he regularly sees the human face of the results.

A young man recently visited Venkat. He was in one of the earliest cohorts of children who've been helped by the lunch program.

The man told Venkat he was the son of a security guard. When the son was in the eighth grade, his father was earning less than a dollar a day. He was so hungry, he used to faint at school. Academically, he was scraping by. Then, the free lunch program started.

"He told me, 'My attention span went up. My concentration went up,'" Venkat says. So did the boy's grades. He went on to college and became an engineer. When the young man visited Venkat, he handed him an envelope.

"And the envelope ... had an offer letter from India's leading multinational software company as a software programmer," Venkat says.